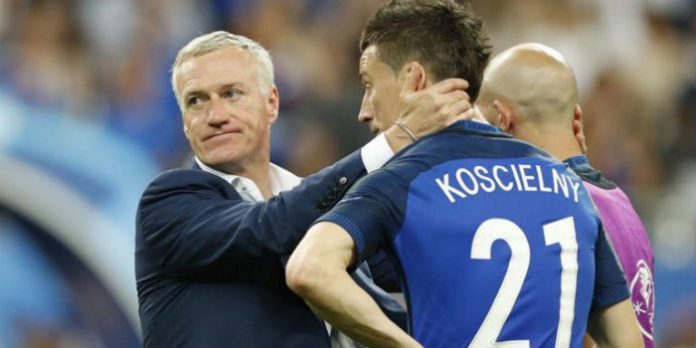 Laurent Koscielny’s troublesome Achilles is making headlines again in France with the Arsenal defender a doubt for tomorrow’s friendly with Germany.

Les Bleus have already seen Olivier Giroud pull out of the squad with a thigh problem and L’Equipe (via Sport Witness) now report that the Arsenal defender missed training yesterday as a precaution.

Didier Deschamps is well aware of long-standing nature of the issue so you’d hope he’d rest Koscielny given he already played a full 90 minutes against Wales last week. He actually missed both of his country’s matches in October with the same problem.

The 32-year-old revealed last week that he’ll retire from international football after next summer’s World Cup, presumably with one eye on extending his domestic career.

Here’s hoping Kos is fine for this weekend’s North London derby, we could certainly do with him in the heart of our defence for such a crunch game.

Oh how we need le boss on Sunday #everythingcrossed

What sucks is that the match is actually Sunday, which means he’ll have even less time to recover. Please don’t play him tomorrow, Deschamps!

What sucks is that the match is actually Saturday, which means he’ll have even less time to recover. Please don’t play him tomorrow, Deschamps!

Already cancelled Sunday activities with my wife based on your comments. With all of my own mess, you perhaps brought the straw that will break the ca’mel’s back, lol.

Why would you play him in the first place? If it’s an ongoing issue and if he is playing with pain then why not ask to pull out? It’s a meaningless friendly and France have plenty of cover. He’s an established pro and I think dechamps would understand.

I hope it’s more of a precaution than anything. We need him for the weekend. Well we need him, period.

Good thing we got rid of that Gabriel fella! Right?

We tried our best to sell Mustafi too.

If h doesn’t play on Sunday, Cech is going to have an even busier 90 minutes than usual. And despite him being a relatively good keeper, I don’t relish the prospect of Kane and co. getting too many attempts on goal. Defence needs to be switched on. Else its gonna be a very long 90 minutes

When Spurs started pulling all their players from international duty, it was inevitable we would see new injuries and existing injuries were going to be made worse.
Everything crossed Koscielny is ok.

@Santori, respect for the pun, but I can’t get myself to upvote it.
XD

The Germany match is only a friendly, but both France and Germany will want at least some time where their best elevens play together against good opponents before next summer in Russia. And I think Varane is also out for France. On the other hand, Deschamps seems to value good relations with the coaches of the big clubs he depends on, and this is hardly a final tune-up for the World Cup finals. So, best guess, Koscielny does not play.

The headlines are becoming as lucrative in invention as The Sun.