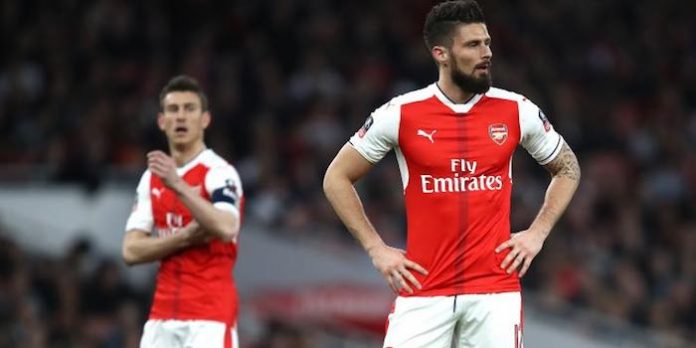 There was mixed news on the injury front ahead of the North London derby for two of Arsenal’s French stars.

Laurent Koscielny and Olivier Giroud were involved in the France squad which played games against Wales and Germany.

The striker scored against the Welsh last Friday night but was then ruled out of the second game with a thigh problem. Koscielny was left on the bench for the 2-2 draw with the Germans as he continues to manage an ongoing Achilles problem, something which pleased the Arsenal manager.

“It was needed for him,” he said, “as we couldn’t use him for a number of games. He just came back against City, because he had an Achilles tendon problem.

“For me if he had played in Germany he certainly wouldn’t have been available for Saturday.

“Olivier Giroud did pick up an injury, I don’t think he will be available.

“It’s short-term, he should start again on Monday, we have to assess him on Monday.”

Alexandre Lacazette is set to start his first derby, looking to build on the two goals he scored in midweek for his country.

We’re in need of a new talisman for these games, let’s hope he’s the man with the talis.

OK, strangely better than I was expecting. We need Kos so great news. Shame on Giroud but he should have been a sub anyway.

Let’s hope we do it Saturday.

A sub that makes all the difference

A sub that makes all the difference

Here’s to Rambo taking the game by the scuff of it’s neck, taking over from where #Rosicky and #Pires before him left it… Tottenham are shit!

He did score that gorgeous flick against them a year or 2 ago. Very underrated goal. Would have been fawned over for months if Alli had scored it against us lol #notbitter

Loving ‘man with the talis’

Everyone expecting AOL to start but come Saturday morning I wouldn’t be surprised to see the teamsheet with Welbeck, Sanchez, Iwobi up front because that would be SO Wenger.

We shouldn’t take the gamble on Lacazette. Better to leave him on the bench n bring him on for the final 15min of the game. Are we even sure he can play up front as a striker or score a goal? I dunno, sounds too risky. Better to go with the more experienced Le Coq, he knows our style and how we play.

Still don’t understand the logic of selling Gabriel and not buying a replacement. Or is BFG and Chambers supposed to be his replacement? Really not well thought out there by Wenger. Too many midfielder that are useless. Supposed to sell one of them and leave Gabriel at least until January.

you had 6 sr CB including Nacho. I guess thats been his plan from the beginning to use him in that role. I don’t know if is going to revert back to the back 4 during the season. 6 is pretty good depth.

Count BFG out because he only plays when he has to fill in. Also count Kos out, he’s ongoing fitness issue is unpredictable. Mustafi is prone to injuary and Chambers barely featered. Well looks like only Holding and Monreal. The former is not trusted as previous season