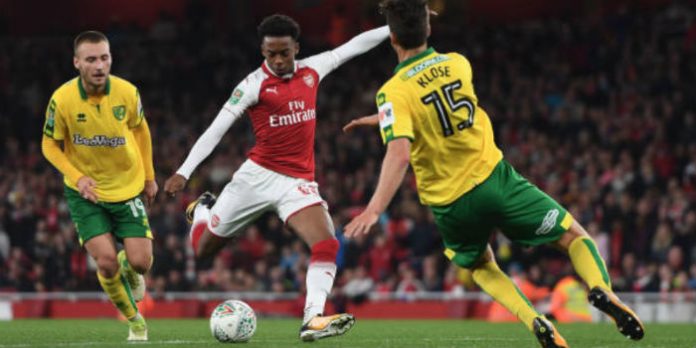 Arsenal have confirmed that Joe Willock has signed a new long-term deal at the Emirates.

The 18-year-old midfielder first came to prominence in the pre-season tour of Australia and China and has been handed a new contract after catching the eye in the Europa League and Carabao Cup matches.

Joe’s decision to commit his future to the Gunners comes just four months after his older brother Chris ran down his deal and left on a free for Benfica.

Congratulations to Joe, who has also been selected by England under-19s for their upcoming European Championship qualifier with Bulgaria.

Good news, glad we are keeping him, unlike what happened with his brother.

Really good news. I’ll be honest, it was always a worry of mine that he would follow his brothers footsteps and run down his deal. Good to see he’s happy at The Arsenal. There’s some serious promise there.

Got big hopes for this guy…think he can be top class if he keeps his head down and works hard. He has the tools to be the rangy, powerful b2b midfielder we’ve been looking for. It’s probably why Wenger has taken a liking to him.

Great news! You have the future before you and will become really important for the Arsenal!

Looked a very ordinary player to me, yesterday against Zvezda.

I agree with this statement. Maybe it’s a confidence issue, but he seems to hide from the ball a lot! He seems fairly good at not being a passing option when the ball was coning from defense or being thrown in. He rarely created chances and doesn’t seem to track back with commitment. No surprise to me that he was the first to get pulled!

Hopefully there’s more to him, he’ll have more chances to prove me wrong. He may assume that being anonymous is better that making a mistake!

Congratulations to Joe! It’s reassuring that he’s staying. I hope he comes good with us.

Excellent news, he’s been 1 of our stand out performers in our Caraboa and Europa campaign thus far. And he is still only 18, has the physicality, mobility and technical ability to be a top class CM.

Great news..
The Academy is more important now than ever .. And the kids are what has excited me the most this season (purely footballistically).

Great. Yesterday’s game was a little boring for sure, but his performance was still enjoyable.

If there’s one place on the pitch where we need more depth and quality, it’s central midfield.

Definitely had some decision making issues last night when pouring forward with the ball. But he’s a young man learning his craft, so some teething problems are expected and we shouldn’t get too hard on the young man. Our Coq on the other hand, that was a real poor performance from a senior pro. Yes, he was even worse than Theo last night.