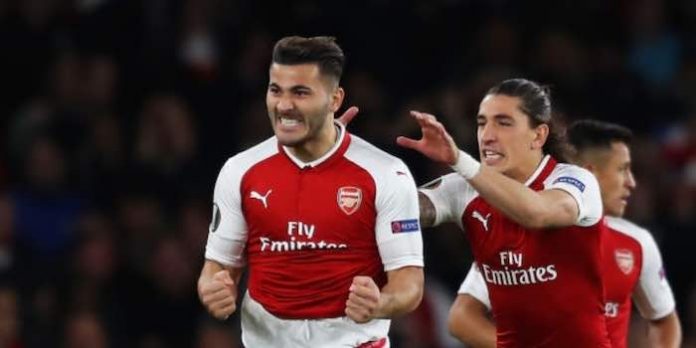 Arsene Wenger has given his reasons for Sead Kolasinac’s absence from the first team in recent games, as the manager has chosen Ainsley Maitland-Niles at left back.

The Bosnian international had some difficult games on the ball, with low passing accuracy, and the manager reckons he’s needed a break before being considered for a return to first team action.

Wenger suggested he sees the 24 year old as more suited to a position in a back three but also that he can play in the more traditional system.

“He is highly suited for a wing-back role, for a more offensive role,” said Wenger.

Whether Kolasinac returns for tomorrow night’s trip to Selhurst Park remains to be seen, but Wenger knows that three points are crucial in the chase for the top four.

Martinelli set for U23 run-out this month

Great to read a positive fan

I particularly like the sound of ‘Venga bowing out’.

I think I could settle for only that.

Of course you do.you can hear sounds that we mere mortals can’t even dream of hearing, dalmatian.

I really can’t understand why a 20 year old right-footed defensive midfielder is more suited to Left Back than a Left Wing Back who’s also played many games as a left back in the Bundesliga.

But I’m just a fan, who knows nothing.

Remember Flamini? He suited well in the absence of Cashley Cole.

Answers my question how exactly?

I think that’s what he meant. I’d rather see AMN play DM beside Xhaka and give the Beast back his LB position.

His last few performances were below par and was losing a lot of balls in dangerous positions also his recovery runs are a bit suspect atm.. I am pretty sure if Nacho was fit in the last couple of games AMN wouldn’t have played as many.

True, but I’d still like to see Kolasinac in there. Maybe Jack and AMN behind Ozil in midfield would take some pressure off those recovery runs.

I really hope Arsene gives Kos the night off. He looks worn out. I haven’t seen Holding do much wrong.

Neither did Chambers – I actually have a better feeling about him than Holding at the moment. Would give him a shot.

Why would you say that Reality check? Tonight’s game will be the first one Nacho will miss so it’s a bizarre thing to say.

Nacho played as a CB along with AMN.

I get the out of form but, but Bellerin has been out of form for months now and still starts.

He lost the ball because Sanchez has been hiding for months….

His non-chalant recovery speed. Lack of concentration has been his undoing. Perhaps it comes with the package.

Why don’t Wenger see the low passing accuracy and mistakes of xhaka in midfield this season,We got to buy a world class midfielder in January

Dream on bro. I’d love to see that too but this is Arsenal!

But the actual numbers say that he’s very accurate…

So it’s cool to rest Kolasinac but not Xhaka then? Got it!

So we bought a left wing back who can’t play as left back. Right…

Would it be so complicated to use them just like everybody else would?

Same error that was made in Zhaka’s purchase. Both weak in the defensive part of the game. That must be Wengers blind spot.

Xhaka is a poor man’s Alonso. He seems suited for a midfield 3, but gets to play with prima donna Ramsey, which has made him look worse…

Really makes sense…his weak with defending part of his Game. City hand a weak defensive last season but look at it now…

Wengee u twat. Amn was so out of sorts against Liverpool and sead would have been the better option. Wenger needs to go

Not quite sure what game you were watching as I felt he dealt with Salah pretty well, so much so that Salah switched wings with Mane who in turn got subbed off. I wanna see the tank back as well but no need to criticise a young player out of position when he isn’t even doing anything wrong.

We will lose or draw tonight. This team cannot win on the road…

Honestly I thought AMN dealt with salah as much as he could. I really think he shouldn’t play lb. Maybe he should be put in the deep end as a midfielder. Would probably work better. Wenger seems to do that with Joe Willock, but not AMN. Does that mean that he thinks AMN has to “shorten his technique”??

Willock has only played cup games.
AMN has played all competitions.

“I think he will play again” certainly doesn’t seem like a vote of confidence to me.

I do not believe the coach at all. I think he was fantastic in his last game. even at half best, he z still better than some of the idiots who played against Liverpool.

Lets be honest i like Kola but he was awful for three games and he along with Sanchez on that left side continuously gave the ball away….Bellerin has been worst though so Kola can feel aggrieved that he has managed to keep his place.