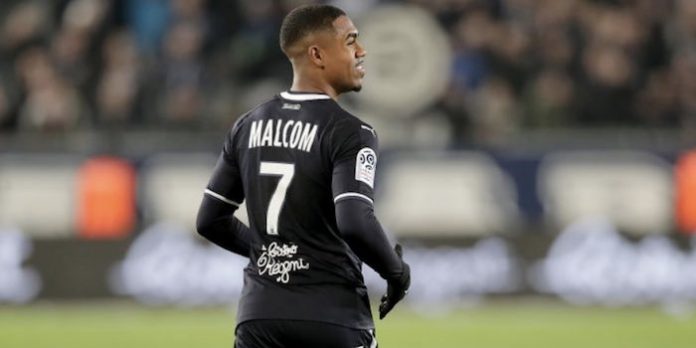 The 20-year-old winger has been linked with big money moves to both Arsenal and Sp*rs in recent weeks, but it looks like he’ll be staying put for the time being.

Asked about Malcom’s future in an interview with L’Equipe, Poyet revealed that he’d not have taken the role if their in-demand star was set to leave.

While admitting that Malcom harbours ambitions to play in England – the player has even been learning English in his spare time – President Martin made clear that, for the moment at least, he’ll not be crossing the Channel.

“Malcom, it has been said and said again, he will not be leaving.

“He has said he wants to play in the Premier League one day. That is normal, what player wouldn’t want to play in England? There is no problem with Malcom.”

As has been well documented, Arsenal have turned their attention towards sealing deals for Henrikh Mkhitaryan and Pierre-Emerick Aubameyang instead. It remains to be seen whether we keep Malcom on the radar or if, like Thomas Lemar, he falls down the pecking order on our shopping list.

Too Drunk To Be Offside
Reply to  Cruff

Frankly I have never seen him play and sounds a bit over-rated. I would much prefer a Lucas Perez upon his return from Loan filling the wide player role ahead of Malcom.

lessthanthesumoftheirparts
Reply to  Too Drunk To Be Offside

Frankly the fact anyone at all is talking about this 20 year old shows that he’s rated. Suggest you watch him first before spouting uninformed shite.

Too Drunk To Be Offside
Reply to  lessthanthesumoftheirparts

Oh the infallible ‘everybody says’ argument. Does that really make the shite you are spouting of the ‘informed’ kind?

lessthanthesumoftheirparts
Reply to  Too Drunk To Be Offside

So I’m supposed to take your ‘I’ve never seen him play’ seriously over the so called professional football journalists that I care to listen to. Right, good one.
I say this because you regularly spout uninformed shite on here. Tonight alone you’ve laid multiple comments oh here peddling your sad little agenda.

SizC
Reply to  Too Drunk To Be Offside

“Frankly I have never seen him play and sounds a bit over-rated.”

How on earth can you have an opinion on someone you haven’t seen!!!

Thank you for your informed opinion!

I like the look of Malcom as a prospect, but I would much prefer Fekir now. Watch Lyon’s last game – unfortunately just added another 10m to his price..

“ITK” people on Twitter seem to be saying the same bs, how they want him loaned back until the Summer. If this is true, why wouldn’t Arsenal accept these terms?

Lemar under the radar would be an error. Lemar is very fast, technical and has a football mind. I still remember what him and Dembele did to England.

I wish by the time he will be available, we will be able to compete with the big boys.

For the money being asked, same price or more than Mahrez who is entering his peak years and is on form at the moment plus experienced in league.

Last week – ‘Arsenal in for Malcom, Aubameyang and Mhkitariyan.’
1 February – ‘Giroud coming back from injury is like a new signing.’

If Oli hadn’t been injured he would have helped us to a few more points for sure. He would be like a new signing!

Given that it was looking more likely that Spurs were going in for him this window thant that we were, I think this is good news. Better he stays put than goes to that lot. Though I think we could use a very speedy, very direct, young winger in the near future, to complement our silky number 10 types and deadly strike force (assuming the PEA deal gets over the line). Unless Nelson develops really quickly in that regard (and I think even he’s more of a number 10), it’s something this squad is lacking a bit, especially after selling… Read more »

We were heavily linked with him actually, apparently he’s good mates with Reiss Nelson as well

No offence, but some of you are funny, guys. The media shake his name (maybe after some request by his agent) and you run like headless chicken… Have you watched ONE game of this guy? No. And don’t tell me about Youtube.

Yes!
I watched a lot of games when he was playing here on Brazil
and i gotta say, that i think he’s a far better player than GJesus9

If we, like Malcom himself probably is, are unhappy with this does that make us (in the) Malcom-tent?

Would be nice to think that, after replacing Theo/Coq/Sanchez with mkhi and Aubameyang, we might focus our energies on the defence, the goalkeeping position and the centre of midfield come the summer.

But that is provided we do get those deals done. If we do, and keep Ozil and Jack (big ifs) then the summer rebuild isn’t as drastic. If we don’t get Aubameyang we’re suddenly going to look a little bit silly for not securing Malcom when it seemed we had the opportunity to do so.

Bringing in more defenders won’t help. The defenders we have are good players. They just need someone to drill them and coach them in defending. Doesn’t help that they don’t get enough protection from midfield and we don’t have a decent CDM either.

He would have killed Reiss Nelson anyway. Phew, we dodged a bullet.

Anyone else worried that Mourinho is stalling the Mkhitarian trade until after the Chelsea game?

But that would mean Moanio was a despicable, scheming, toadwank – out of character surely…

Is he not cup tied anyway?

I hear Sanllehi and Mislintat were asked the same question when they were interviewed for their jobs:

Gazides: Do you think Venga should be sacked or not?
They: Yeeees.
Gazides: Good, now we can continue.

Perhaps (I know I’m an idiot) Wenger is holding money so he can go back for Lemar on the last day of the summer?

Q: Would you like the fish or the chicken?

Brendan from cold as hell NY
Reply to  Mayor McCheese

Guess we can add him to the ever growing “almost” signed arsenal list :/