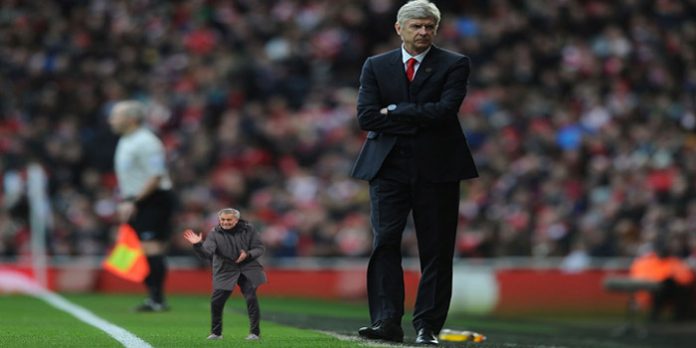 When the Manchester United manager, Jose Mourinho, was asked about the player exchange between his club and Arsenal involving Alexis Sanchez, he typically had a little dig at us.

As is also typical, it was brought up during Arsene Wenger’s press conference today, to see if they could spark a little tit for tat, but the Arsenal manager was not going to get drawn into any tabloid games when asked what he thought the Portuguese twat-o-war meant.

“I don’t know,” he said. “You should ask him. Can you be fantastic without being giant? Yes.

“Can you be giant without be fantastic? Yes. I don’t know, you should ask him what he means.

“I think they are two great clubs and two players, the two clubs have made a good deal, yes.”

This press conference chicanery from some sections of the media was apparent earlier this week when Sp*rs boss Mauricio Pochettino took umbrage at Wenger’s comments about how the media give his side a more difficult time than others.

He insisted the Frenchman had ‘made a mistake’ by talking about his club, something which displeased Wenger today who felt the Argentine had been misled about what he’d actually said.

“I just complained that we are always in a hot spot,” he said. “I did not speak about anybody. I’m not happy about that.

“I’ve worked for 20 years here and I respect the press and I stand up for what I say but I don’t accept to be questioned about things I have not said.

“Of course he’s been misled. He said I have to focus on Arsenal and he’s right and that’s what I do. I have no problem with him or anybody else.

“I want to be responsible for what I say not what I’m supposed to have said. That’s really disappointing for me.”

Some giants are good though, such as:

The BFG (both Arsenal and fictional)
Andre the Giant (who was driven to school by Samuel Beckett – true story!)

Er, that’s about it. Giant pandas are kinda cool though. Much better than those measly regular sized pandas, the bamboo bastards.

Some Giants who, despite their huge frames, are ultra defensive in duels are not fantastic. That’s the point.

Yes, United are a giant club. But this current united team will be remembered for mediocrity and bland football. I know a number of United fans who are already at their wits end with the way Jose goes about his job. He’s a ticking time bomb, and could never have the ability to hold down a job for anymore than 3 or 4 seasons, let alone 20 years.

Serious opinion request, does Alexis outlast Jose at a United or vice versa?

Alexis, cause they wont be able to shift a 34 yr old on those wages

I get your point but who cares how long he stays? Not everyone wants or needs a marriage mate!
I think he gets bored and tbf I would too after 20 flipping years!

Red Pandas are awesome. And they’re not giant.

They’re not even pandas. The ailuris fulgens are closely related to pine martens. You learn all sorts of things on holiday when you visit Dublin Zoo. I had a great time, and my girlfriend at the time bought me a cuddly tapir calf as a souvenir. I named him Snuffle.

It might be cuddly now, but those Tapirs get really big you know?
#atapirisforlifenotjustforchristmas.

One of the tapirs mauled a little girl. The idiot keepers ran one of those ‘hands on’ experiences, but failed to take into account that mother was with calf, and so would react aggressively to any perceived threat. The poor little thing had her arm bitten to the bone. You’re right, then can be vicious.

They do taste delicious.

Mourinho is a giant.

The cuntest cunt of them all ..

and don’t forget Hulk Hogan body slammed Andre the Giant at Wrestlemania III 30 years ago! Made me feel old seeing that.

A Gorilla
Reply to  David C

Arse-Head
Reply to  A Gorilla

Sh*t stirrers media scum. That is all.

ManU are definitely not fantastic for some time now and that giant mouthpiece Mouhninio can’t change that quickly i hope …as for the constant cover of Alexis whereabouts it’s beginning to make me sick – you half anticipate the media showing him in a toilet using a ManU logo toiletpaper while his dogs wait outside the cabin ! 🙂

I think you mean “and that giant ring piece MaureenO”

“I think he needs to talk for himself and for Arsenal,” said Spurs manager Mauricio Pochettino, talking about Arsene Wenger and the club he manages.

Without a hint of self-awareness, Pochettino continued, “He made a mistake to talk about us.”

We all know that for all his failings, Wenger rarely talks SHIT.

Feck all this bullshit, media, managers, agents and players talk the talk believe their own hype. Just win games. That is the only thing that will make you fantastic and great.

* Giant not great. Yes great and giant. feck this puccine

My Coach is really one of a kind. Am going to miss you when you go finally

ManU has been a giant (but not fantastic, the villain ones) even before Mou was there. I am hoping ManU players will do a Chelsea to sack Mou because he just can’t keep his hole shut. Mou is a disgrace to very club that he managed. Even his compatriot Enderson hates him.

Who’s Enderson? And Ederson is Brazilian

The son of an Enderman.

Some Giants have won 20 league titles, while other’s who claim to be giants haven’t won the league in over a decade

A P
Reply to  Duncan

And some giant cunts are named Duncan.

here is a sentence out of Poschettino’s explanations :

“I’m so young. Praise? Of course we receive praise. Football is not only to win trophies, it’s the circumstances of different clubs.”

I mean….he is managing Spurs but trophies is not the only thing in it….

Sorry guys, but I wonder how the press would have reacted if Mr Wenger had said something like that ?

They’ll comment only when it suits their narrative ie for clickbait.

add klopp to that noise. a couple of fourth place trophies and all of a sudden they think think they’ve achieved something.

Too right. A pox on Pochs.

He’s what you get when you cross a hamster with a git.

A beautiful play by Wenger, ratted the scum then gave the press more stick by playing them off each other, then twisting moaninhos words to hint you can be a huge club but you can play shite, defensive football, basically anything fantastic…

Pochettino has a real chip on his shoulder doesn’t he? He’s already had pop shots at Conte, Mourinho and Guardiola on top of those at Wenger. If any one of those managers specifically called out their peers like he’s done they would get slaughtered in the press.

And after saying that Wenger should focus on managing Arsenal, the pocket Tino was also commenting that he’d rather become a farmer than an Arsenal manager. Like somebody asked him..

Planting potatoes at their new stadium?

He would take the arsenal job in a second.at the end of the day spurs are still a small club and are one player off fighting everton for 10th spot.

Ask Hagrid, he will tell you the same.

Good too see AW getting the better of Mourinho in his smartass attempt, fantastic beats gigantic 24/7, Mourinho painted himself into a corner here, look forward to see how tries to escape

In Arse We Trust

Wenger never mentioned them or Liverpool but unless you are the press, not difficult to figure out who the laggards have been.

Liverpool for all their 70 year old music and irritating coach with his sideline shit show haven’t won the title for a quarter century now. Not to many domestic cups recently either.

Spurts well…one season above us and they are the dog’s bollocks. 1961 when TV was black and white like their kit…last time they won the big one.

Someone needs to remind Wenger his math isn’t quite right. One for one replacement he says this January. We have let go Walcott, Alexis and Coquelin. We added a reject from United low on confidence in Mhkitaryan. I think he can afford to add someone at very least (and not necessarily a striker because we have plenty) AND keep our big man Giroud. Replace Giroud in the summer. Why the rush? The thing about Aubameyang people do not realise is he needs service to him. We just got rid of one of our most creative service providers in Alexis. Lacazette… Read more »

My service provider creatively tries to trick me into buying more data than I need.. I’ll call their salesman up as a Sanchez replacement 😛

Your right but this ambumyang thing is just for the fans .soon as the transfer window is over theyll say they where close.and i think its bad from arsenal unsettling a player wen they have no intention of signing.they want 60 million and that a bargain in this market wen a player like morata goes for 75.stop haggling over pennies.

So are they haggling over pennies, or just doing it for the fans? Because you can’t have it both ways as a moaning supporter that is never happy. Pick one excuse to beat the club with and stick to it.

Surprised people down-voted you so much because largely what you say is true. I faithfully sat and watched Aub’s 31 goals from last season. He does score from out side the box, but more often than not he is the Gabonese Gary Lineker and all the real work has been done further up the field…still if he can bring goals then we would be mad to turn that down. I just hope he’s not another diva!

How did Wenger pronounce the * in T*ttenham?

Is there any other way?

That’s great but why have we still not signed Aubameyang

It feels like United and their friends in the press are running our noses in this whole Sanchez thing.

Don’t worry, when Sanchez loses the ball we and others will be there to grab it.
Watch Mhkitaryan start to flourish again after being beset and hampered by that weed.

Anyway, Arsenal is slowly changing without any fanfare and within the next year we will probably have a new manager. We have a whole year to get one now, and if he can come before the year is up, AW will go.

The are a Giant that hasn’t finished above us since Fergie retired. In which time we have won 3 FA cups, and they have won 1 and the Europa

……and who da hell are ”the bamboo bastards”

It seems Liverpool have stumbled to Johnny Evans and Albion. So much for all action Jurgen. No title , no FA cup, no League cup no CL either. 4th spot trophy then a big step for a club who haven’t won the PL nor a title for a quarter century.

Comparing JM to AW for me i agree JM has achieved far better than AW but shouldn’t get himself thinking he could be loved or be a better manager than AW. He tried it at chelsea and what happened???