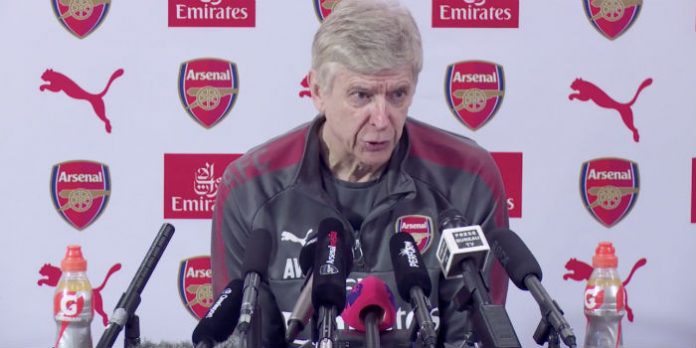 Arsenal don’t play this weekend, our next game is on Tuesday evening when we face Swansea in the Premier League.

Nevertheless, the manager’s pre-game press conference took place this morning and he gave an update on the latest injury and team news.

There was some good news regarding Olivier Giroud who should return to the squad for the midweek encounter.

“Giroud should be back in the squad for Swansea,” he said. “Welbeck is too early, and that’s basically it.”

With four days until the match, there wasn’t much more in terms of team news, and with a weekend off Wenger was asked what his team would be doing.

“Practicing and preparing for our game,” he said.

“We need to recover a little bit from a very intense match against Chelsea, and will to prepare properly for this game.”

Emery: We cannot lose to Chelsea and finish in the top four

Ozil being assessed ahead of Fulham clash

Good news on the HFB. With Monreal and Kos back we are so much better off. Ramsey too. The team overall is much stronger than when Sanchez was playing in his last few matches.

And team spirit and energy levels seem higher too.

No disrespect to the Swans but these are the ideal team to be playing to build some momentum on the back of the Chelski result…Oh wait, i forgot i’m an arsenal fan *crosses fingers and toes*…COYGs

They won Liverpool in their last match in Wales. “There´s no such thing as a free breakfast.”

Our record against Swansea isn’t very good but we have the bonus of extra rest and more time to prepare. Hopefully we can really take the game to them and get Mkhi involved.

No excuses with the extra rest and time to prepare for the fixture. Really hoping we can carry on the momentum and make a push for the top 4. Can’t be finishing below the s#@% over the road again!

Call me old fashioned but I prefer Premier League games on a weekend. Preferably Saturday. Preferable 3pm. The world we live in is a foreign land…

Agreed, but this is a midweek round of fixtures for everyone (as there aren’t enough weekends in the season), not a rearranged Saturday game.

It will be nice to have all our injures players back and see how the on beating run will be in the remaining league games… We can do it,???COYG

Is Mkhi cup tied for the Premier League as well, having appeared for Man Utd this season already?

… and Miki will be available … Worth a mention surely!

I’m assuming he was asked about injured players

He did mention it.

its definitely down to wenger that when he says ‘practicing and preparing for the next game’ I just think of the lads casually jogging round the pitch, some playing keepy ups…and other lying on their backs on the grass reading a novel. maybe someone is prepping a bbq – all while wenger walks round the pitch in his own wee world whistling his favorite jazz tune.

Looks like this press conference is planned around Giroud. Is it a message to clubs who are interested in HFB?? Surely, if someone wants him badly then they wouldn’t want him included in the squad for Tuesday.

There was 15odd minute of press conference and this ‘clip’ is about 1 minutes worth.