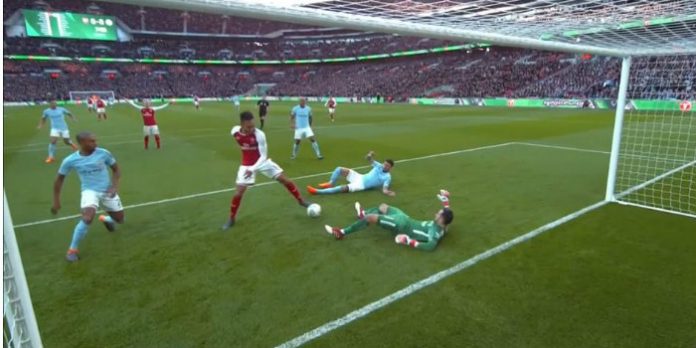 “We analyse all the games in a very mathematical way. We didn’t give too many chances away, but we gave away easy chances, and didn’t create enough for ourselves.” – Arsene Wenger

Sources: Opta via Whoscored.com and my database

*I thought Aguero’s goal was a big chance. Yes, the shot was from outside the box but it was one-v-one with the keeper and it was Kun Aguero who is one of the most prolific strikers in the Premier League. However, Opta didn’t count it as a big chance. I did.

All in all.. shite

A gazillion plus one – Miles in the gulf between us and them this season.

One in ten games we may beat them. They are miles ahead of us. Until Wenger goes and then new manager will hopefully replace Bellerin Mustafi Chambers iwobi xhaka Ramsey Welbeck we will remain where we are.

Turd and polish spring to mind ?

Let’s freeze ‘em all. Then get to work.

Fuck that photograph is painful.

It would have been disallowed by VAR

If someone on my Sunday league team made the same mistake Mustafi did on the first goal, then I would have gotten in their face for it.

Come on pep you didn’t even need that trophy.

Wenger will outlive anyone in the world.

If the fm continues,he will lead to Arsenal drifting further into the wilderness .And it will take light years to fight for the top 4 let alone win the epl.
The signs have been there for the last 10 years. Who could forget the 8-2
murder and the heavy losses against Pool,Chelsea and MC.
Enough is enough.

0 – other clubs where the manager would still have a job after recent results.

Hope that guy(Bellerin) looks at himself as a FOOTBALLER and not as a model or intellectual for Oxford.
People like Monreal need to be sharing their story and desire at universities not a 22yr old Wannabe who havent still found out how to cross the ball or be consistent, yet still has the BALLS to criticised people who pay to watch him.

Exactly..what did he accomplish to go to Oxford and dis fans.. he’s just a barca reject, an average player at best..But I guess being coached by this delusional manager he became deluded enough to think he’s a legend or something

why is xhaka what…….

Fair play to you & kudos 7am for researching & publishing those stats…Don’t know how you keep doing it following these inept & repeatedly shite performances by the team game after game. TBH I struggle now just to watch this current circus we call “a team”, let alone take the time afterwards to compile stats. But appreciated it is, & thank you. Is it just me, or do others now simply fail to connect with the squad? We call it “a team” but they are not (at least currently) in my opinion. It’s just a group of individuals joined only… Read more »

Deano
Reply to  Stuck on repeat...

You paint a bleak picture, sad thing is we are actually going to get worse this season.

Thursday night left me pretty worried when even our reserves seemed completely lost and without any enthusiasm and understanding of what was required. Chambers was all over the place that night then he is in a cup final team, and he wasn’t even the worst defender yesterday, just a poor one. The shit show yesterday was just a disgraceful carry on from Thursday and proof that a manager is absolute must for this club.

Wenger makes me feel like Arsenal is a horse for everyone to ride on….

I don’t know what that means, have a recommend anyway. Good (but awful/sad) imagery.

We are limping toward the knackers yard.

Like a bitch who anyone can f&*k her for free

Apologies to digress but apparently Arsene Wenger got angry at the Fourth Official for not giving more extra time. The Official actually asked Wenger ”why would you want more extra time?”

We need to take game after game and move forward…. Let’s be positive and focus on the next challenge… Bring on the next Premier League game…..
oh, wait…..??

We loose with out fight and that’s absolutely shameful. city have bought the best players money can buy and will continue to do so, I certainly don’t expect us to play them off the park or match them for 95 minutes. However You would expect our players to show the will and attitude to fight hard dig in and work endlessly for each other, for the badge and for us fans especially in a cup final!! And especially as those quality’s don’t require a cheque book. We are a team who if pressed start to unravel either by individual mistakes… Read more »

They’re professional footballers. They care. They ran their socks off (with one or two exceptions) until it became obvious that the game plan was crap, the other guys were considerably better, and the manager had no idea how to respond to what was happening. Jack was gutted by the team performance; you could see it. He wasn’t the only one. But what does the manager do? Minimize the gulf in performance, bitch about the referees, and pretend we were just a few mistakes away from being able to play with these guys. The players take their cue from this delusional… Read more »

We were better with those cheap players and youth. There was also something fun about the way we overachieved. The likes of Eboue, Bendtner, Song and Denilson won a lot of Champions League games with us including thumping Porto 5-0.

Great point tbh. We were bad, but not this bad.
I kinda miss eboue now…