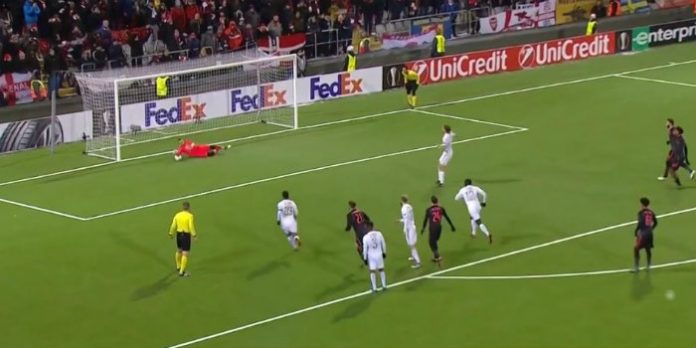 Arsenal kicked off the first 25 minutes clearly on the front foot and not only owned nearly 82% of the possession but also forced Östersunds into 3 errors, managed to get off 10 shots, and scored 2 goals.

Arsenal dominated touches and passes in the first 25 minutes by 81% to 17%:

Arsenal also managed to dominate nearly every other category as well – Tackles and interceptions were nearly identical but remember that Arsenal had almost 82% of the ball. So, identical numbers in that context are actually quite uneven. I should also note here that Östersunds 1 shot was actually their own goal. I used the data from Whoscored.com to create this chart and that’s how they had it scored.

Once Arsenal went ahead 2-0 Österstunds seemed to either remember that they could play or throw caution to the wind and suddenly gained a foothold in the match. Arsenal still had a majority of the ball but it wasn’t 82% and was a much more modest 53-47% advantage for the London side:

Incredibly, Arsenal seemed shaken by the Swedish side and they were able to force Arsenal into 2 errors in addition to the aforementioned penalty. Well, I say “incredibly” but anyone who has watched Arsenal in away games this season knows that the team are error prone (they have conceded the most errors in the League this season with 24).

Ainsley Maitland-Niles had a decent outing in almost every statistical category but did have one black mark on his record.

He completed 88/94 passes and was 100% accurate with his passing in his own half. He did have one bad short pass in the center circle, after which he fell down trying to recover, which looked particularly bad. He did create one shot for his teammates and 4 of his 6 bad passes were in the final third when he was trying to set up someone to score. He also made just one of Arsenal’s 2 through ball passes (the other was by Calum Chambers.)

Maitland-Niles also completed 3/4 dribbles through the center of the park, including 2 rather daring (foolish?) dribbles in his own backfield.

But the blot on his record is the 4 times he was dispossessed. Two of them were in his own half, near the 18 yard box. Interestingly, three of the four were “standing” tackles, meaning that he wasn’t trying to beat his opponent, he was just trying to shield the ball and all four of them came after the 65th minute. I have a pet theory that Maitland-Niles’ conditioning isn’t quite what it could be for a top level midfielder and while this far from proves that theory I’m going to pretend that it does. He’s also just 20 years old and defensive midfielders get better in possession as they grow older.

Another notable performance from Elneny who was 106/109 passing and I have to admit I love that he’s so incredibly mobile and available for his teammates. He doesn’t do much else, though: just 2 interceptions, 1 tackle, 6 ball recoveries, and 2 blocked passes.

Mkhitaryan had another weirdly stellar performance. He was part of the gang of four who all had 3 key passes (Ozil, Mkhi, Iwobi, and Welbeck). That led all players. He also took 6 shots in this match, which led all players. He had a big chance shot (blocked). But he attempted 5 tackles and only won 1 and he also lost possession 6 times (which led all players). He is a terrific player who just looks a bit out of shape at the moment. But he’s already got 4 Arsenal assists (not counting his pass for the own goal) and he has an Ozil-esque nose for open spaces on the pitch. I can’t wait to see more of this player as he gets used to his teammates and finds his place in the Arsenal system.

Shout out to Calum Chambers who completed 92/97 passes, led Arsenal with 3 clearances, 4 interceptions, and also had both of Arsenal’s errors that led to a shot.

And finally, shout out to Ospina who saved Arsenal’s first penalty since Lee Dinglepop palmed away Tommy Tomagain’s shot in 1989*. You should have seen the haircuts on those guys!

Sources: Opta via Whoscored.com, Squawka.com, and the StatsZone (@statszone) app.
*Arsenal’s last saved penalty was in 2014, Fabianski against Bayern (Muller) and the last saved penalty in the Premier League was Szczesny on Benteke in 2013.

It really interested me to see the team performance and incredible save from David Ospina, I think Ospina can challenge cech for the number 1 spot. Ozil was class and Elneny was super, congrats to the team in whole COYG.?????

Ospina isn’t good enough to be our number 1. But sadly neither is Cech anymore. We need to be looking for a worldie keeper this summer (nobody mention the fact we let one go for peanuts last summer) and possibly look to promote Martinez to number 2, although I am increasingly concerned that his loan club don’t wish to play him… Strange one if we rate him so highly.

@Mein Bergkampf Yeah I agree. We need to get a new keeper. Although our biggest issue lies with the goal keeping coach Gerry Peyton. I think it speaks volumes that Cech turns up at Arsenal and mistakes start to creep into his game that weren’t there when he was at Chelsea. People can put it down to age, but I don’t really think that’s it. As we all know goal keepers get better with age hence they have much longer careers then outfield players. So I think Cech’s drop in performance has come from simply not training properly, or training… Read more »

I disagree. It is due to age. Just look at Cech with the ball at his feet. He’s pretty bad. Hid legs are going, he has no pace and his distribution is pitiful. He also takes some insane risks (just watch what he did in the last NLD to confirm this is a fact). Sometimes he is fantastic, despite being on the wrong side of 35, but no amount of coaching is going to give him back his legs or stop those bad decisions from happening. Sadly for Cech, he is no longer good enough to be Arsenal’s #1 keeper.

@Big Cheese, What North London Derby were you watching? if it wasn’t for some of Cech’s outstanding goal keeping, we would’ve been on the receiving end of an absolute shoeing. He has no pace? I literally have zero idea what you’re referee to here. He’s a goal keeper? Not a wide player. And he’s not that slow off his line at all. I cant recall one moment where I’ve thought to myself ‘oh, he should’ve been faster off his line there.’ His distribution isn’t that bad either. He obviously made that mistake against Swansea, but off the top of my… Read more »

Chelsea at the bridge last year. Cech passed it to Fabregas who buried it. You don’t remember?

I think most Chelsea fans would tell you Cech was never quite the same since his severe head injury. Blaming a coach for the mistakes of an aging and psychologically injured footballer seems illogical.

Oh, what would I not give to have Woj back again!

That being said, I hear Oblak’s signing. Just waiting to get his name on my jersey!*

*Now to get real, I’d be happy with a Timo Horn or a Jack Butland.

JUST FUCKING GET SOMEONE!

Arsenal is too bad, when downshift (put in a lower gear), the same happened against Crystal Pallas and Everton, after the break. There is no team who keeps pace for 90 minutes. When is in high gear, is the second (domestic) best after City.

Not wanting to piss on Danny , but boy that was bad. He seems a good , hardworking lad with his head never going down; honestly don’t think though he’s cut out for this level. Being the worst player on a day where the opposition was league 2 at best is a right shocker. If he hadn’t come from the United academy, I’d bet he would be at some PL-Championship yo-yo club. Speaking out of disappointment as someone who believed he can improve and become a genuinely quality striker 3 years ago. This match is what breaks it for me

Plastic pitch, -4′, coming back from injury, and no decent service. There’s a lot of slagging off going on in here.

“Incredibly, Arsenal seemed shaken by the Swedish side”

I’m guessing that was sarcasm.

This was a difficult place to go and we came away with a good result, so props to the lads for that. Bit of a concern though, that had Ostersund played the first 25 minutes the way they played the rest of the game, it might just have been a different story.

I’m not so sure. Weather and pitch maybe but Ostersunds looked convincingly shit to me.

The home side were v poor in the first 20 minutes or so, I assume v nervous. They lost the tie then so had nothing to lose and were decent in attack.

Though very one small maths point: ‘Arsenal dominated touches and passes in the first 25 minutes by 81% to 17%’, only comes to 98%.

Though obviously it doesn’t change the overall valid point, we dominated the overall 25 minutes.

Welbeck looked like a man who has never played football before.

It’s obvious the boys were wary of playing on that pitch. Something I noticed in the first few minutes and thank goodness we scored early. Can’t wait for the return leg.
I wouldn’t really blame Welbeck for yesterday. For someone with his injury history, I 100 percent expected a subdued performance on the 3G pitch.
He’ll do better as he gets a run of games

These are games we should win. Whenever we do ,due to proper plans credit should be given to the team carrying them out. Conditions in games like these are no easy feat and so credit is due. Saving a penalty is no easy feat ….sometimes it’s up to the players to rise to the occasion…….

I agree. Anyone saying it was an easy win has probably never played football. Look at how Bristol City took apart United, or how Nottingham Forest destroyed us in the F.A. Cup this season. Any lapse in concentration at this level and you pay for it. Good job to Arsenal for climbing back in the ring and giving us something to be happy about.

Guys why all the complaining, we won 3-0 on a pitch with fake grass and weren’t playing at 100%. The fact it felt like a pre season game surely hints we have more in the tank and cobsidering wr won 3-0 should be a positive. I think it’s perfectly natural to slow the intensity down a bit and manage the game (although we’ve all seen us do it in the past and scrape a sketchy 3-2 I guess).

The fake grass thing, do we not have an indoor training pitch ? A training pitch made of “fake” grass ? Perhaps we don’t play 5 a side on it though that would be surprising, the artificial pitches of today are far superior to the early ones the one in Sweden looked like a bowling green and surely should have helped our alleged passing game .How would the players of today fare on the pitches of yesteryear? With barely a blade of grass down the centre of the pitch but a little on the flanks if you were lucky ?… Read more »