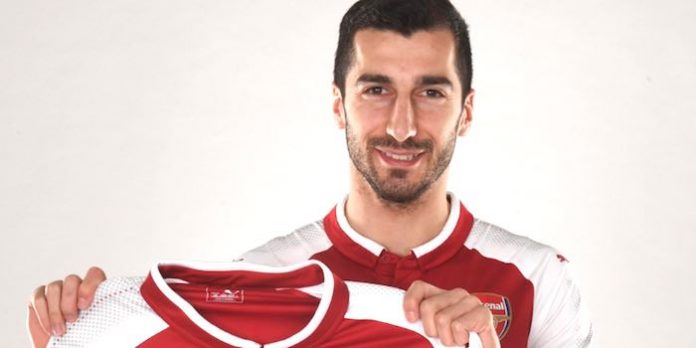 Henrikh Mkhitaryan has been added to the squad for the remainder of the Europa League campaign, along with new signing Konstantinos Mavropanos and, interestingly, Santi Cazorla.

The Spaniard hasn’t played since October 2016 and, as we all know, has endured horrendous problems with his Achilles and an infection he picked after one of the multiple surgeries he’s had since.

It may well be a case that his inclusion is just in case he can make a comeback this season, and if Arsenal get to the final in Lyon, who knows what might happen.

Mkhitaryan, meanwhile, will wear the number 77 in European games because of a UEFA ruling which stipulates clubs cannot field different players with the same number.

Alexis Sanchez wore 7 in the 3-1 win over Cologne, therefore the Armenian has to wear something else, and he’s just doubled up on the number he’ll wear for all other fixtures.

Good to see Santi named in the squad. Maybe an indication he might get game time before the end of the season.

I gosh darned hope so

That would make all gooners so happy. But I suspect it’s more so we can bring him on in the last minute of the final when we’re already 4-1 up against Villarreal (his first club) so the whole stadium can erupt in applause and sing his name aloud! O Santi Cazoooorla

A team consisting of Wilshere, Santi, Ozil, Mikh, Aubaemyang, Lacazette would be a joy to behold from a footballing perspective.

It is! But only if your ticker can handle conceding 4 goals every game. Put Coq in there as well and then you’re…. oh.

I wouldnt feel very secure with that team. That’s only six players, most other teams will play with at least 11, 12 if Mike Dean’s involved.

It might have something to do with the fact that we simply can’t fill all available slots.

I might have to remortgage the house if I’m going to get “Mkhitaryan 77” printed on the back of my shirt.

Why is that Aubameyang is cup tied for Europa league? Dortmund is in Europa now but they are yet to play in the cup. Granted we signed him with the full knowledge, but this rule is not making any sense to me. If someone has a better explanation please enlighten me.

Because essentially they are in the Europa league now. Regardless if they have played in the knockout. They were drawn in the knockouts therefore they are classed as in the competition. It’s a shite rule, as I would have loved Aub to rip it up in Europe too! Think this must make Lacazette the EL striker then?

because uefa are cunts . if auba cant play then alexis should not pla CL either as he played uefa.
stupid rul favoring the CL teams as they now if they buy player that is playing in uefa can play for them also.

Third place in the CL group stage can be perceived as a Europa qualifier. So with that UEFA logic , Auba helped them ‘ qualify ‘ for Europa by coming third in the group xD

Not that I want the story of arsenal with our santi to end,but if it had to then the final of Europa league has got to be the one with him captaining our side

The inclusion of Santi Cazorla still an indication of “No Ambition” on the side of the coach. This is the guy we all know to be injure and highly in doubt to be able to play football in the unforeseeable year. Does it means there is no fit player in the squad? i beg

Not gonna lie, I kinda want the 77 shirt. Are they selling it? Collector’s item!

Is it usual for squads to reduce in size for the latter stages?