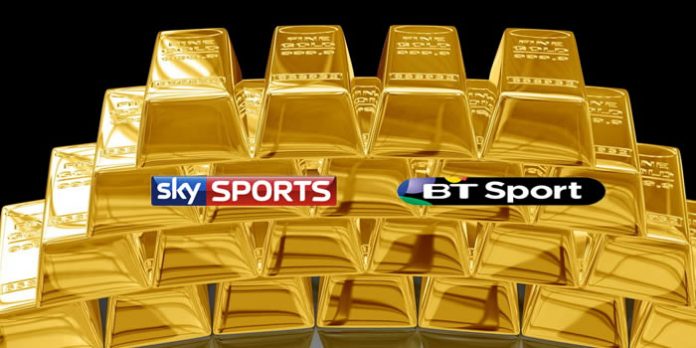 Sky and BT have once again secured the TV rights for the vast majority of the Premier League games for the period 2019-2022.

The former were successful bidders for four packages of 32 games each, while the latter has, as yet, just one package to its name.

There are two further packages still to be sold, with speculation increasing that a new outlet, perhaps Amazon or Facebook, could get in on the act.

The details of what’s been agreed so far were released in a statement on the Premier League website, with BT winning package A, while Sky have packages B, C, D, and E.

Changes to the scheduling of games will see eight games played on a Saturday evening at 7.45pm, as well as the continuation of Friday night games.

This deal does not include overseas rights which are sold separately. The last domestic deal for the same number of games was worth £5.19bn (almost £1.7bn annually), while the new £4.46bn deal over three years works out at £1.48bn per season so we’re beginning to see a decline in TV revenue, which is interesting.

Is it the first sign that football’s bubble is beginning to burst?

Disappointing. Was hoping for a fall in TV money so maybe some reality could return to the great game. You know, where kicking a ball was top of the agenda.

We won’t know until they sell the last 2 less popular packages but it does look like it’s falling a little.

That is an astronomical amount of money isn’t it.

Hopefully the bubble does begin to burst. May still take another 4-5 years for some form of normality. Crazy to think that in 2007 the British transfer record was £30.8m for Schevcenko and the global record was £46.1m for Zidane.

Those were the days when £100,000 a week was considered an obscene salary. Today all you have to do is be a slightly above average footballer in the Premiership and you will get those wages.

The overseas revenue is just kicking off. Markets in China, India and America are being primed for tapping. The bubble has some way to go yet I think!

I think the overseas TV is a different package (not one of these, as mentioned above), and customers in China and India won’t pay anywhere near the price the UK will.
Yes there’s enormous potential for commercial growth but just not enough people (yet) with the cash for a high price TV/cable package.

I think its a sign we’re reaching saturation point, if the remaining packages do move to a new platform, I can see official viewing figures declining. I already think there’s too much football on TV, I only watch Arsenal now…insert joke here. No more 4pm kick-offs on a Sunday will be a bit weird and getting BT Sport free with my mobile won’t be quite the bargain I had thought it would…I am so hard done by!!

Fragmenting the market across an ever-increasing set of broadcasters all looking for their own viewing contracts is ridiculous. To have a package for Bank Holiday games?!

Official UK viewing figures have been declining for a few years now.

It’s not a decline is it? With another 40 games still to be placed the run rate is £5.57bn which is 8% higher than ty last deal.

Although I think there’s more games shown in total. The cost should be calculated in price per game in order to compare.

Agree. However I do hope there is a decline, it’s way too expensive currently.

I dont think consumers would be charged less even if they spent less on the packages.

Nope, it’s already more per game than the previous deal. The headline figure is not accounting for the fact it’s 3 years compared to 4 years on the last deal.

Some packages are less, but some higher. Overall slightly higher per game so far, but the remaining 2 packages aren’t likely to be especially popular, so the Price per game could easily be less overall. We won’t know until they’re sold off.
The more interesting one will be the overseas package, which should increase, but by what proportion…

It’s the continuation of the overkill of tv. Mondays ok, but Friday night and Saturday night? They’ll soon be having UK breakfast time kick offs to suit some foreign tv demand.

Could be a lot of “fun” in the pubs/bars. Previously the football crowd would normally be wandering off (possibly for some grub before coming back) before the usual Saturday evening crowd arrived in force, but now there’ll be regular overlap. Not sure that’s the best idea, but we’ll see how it pans out.

I work in content production for broadcasting. Everyone is waiting for the bubble to burst across all forms of TV entertainment… The disruptors are digital/non-linear platforms but, the revenue is not currently there it’s still in traditional/linear broadcasting. What will truly see the bubble burst, is if clubs are able to negotiate licenses directly with digital platforms. We’re starting to see all their over-the-top content being sold to third parties already… it might not be too far away. What that would mean though is the club’s with the highest number of (engaged) followers will get more money. In any number… Read more »

I enjoy Flow Sports which have the rights for every single premier league game despite being a foreign channel. (Takes the piss!) I have the choice of all 3pm Saturday games.

Fine for you but just a thought for us season ticket holders being pulled around the calendar and clock at the whom of broadcasters. No one gives a monkey’s for the real fans.

Your sentiment is fair – but please don’t suggest that others are lesser fans than you just because you’re fortunate enough to attend games regularly!

Kind of hope the bubble is bursting. I have watched less overall with the decline of arsenal and the overall corporatization of the league. Hard to get into the other matches that don’t include arsenal.

The real threat is not decline in TV money. It’s the rate of inflation in transfer fees and wages. No matter what happens Arsenal as a club are built to withstand downside and we owe a great deal to Wenger for that. Certainly, we would be competing for the CL had FFP been enforced the way it ought to have been. My only BIG regret is we should have signed outfield players the summer we bought Cech. Wenger placed too much trust on his players that season and they let him down eventually. The one thing that has changed since… Read more »

When you have to buy multiple packages and look at various ways of using them via tv and streaming, it all starts to get a bit too expensive and fragmented. I would pay again if I could buy all Arsenal matches from one source. Until then, it is just a mess and MOTD will do.

Why don’t they sell the Saturday 3pm games?

3pm black-out, no live televised football can be shown in England between 2.45pm and 5.15pm to ensure people go to games at their traditional start time, and not just watch on TV. Given how fragmented the schedule is now, abolishing it will probably make little difference to much of the Premier League but can see how it would still have a massive impact on the lower leagues.

Because there is real in the UK that you can’t show any live football from anywhere between 3pm and 5pm hence why sky couldn’t show the 1st half of Barca and Real Madrid one year until the 2nd half started just after 5!

Id imagine the last two packages will take the total up to around or above last years spend. With bt winning just one package id expect them to fight pretty hard for the last two. Or if a new contender enters the arena then id imagine they would be bidding pretty high