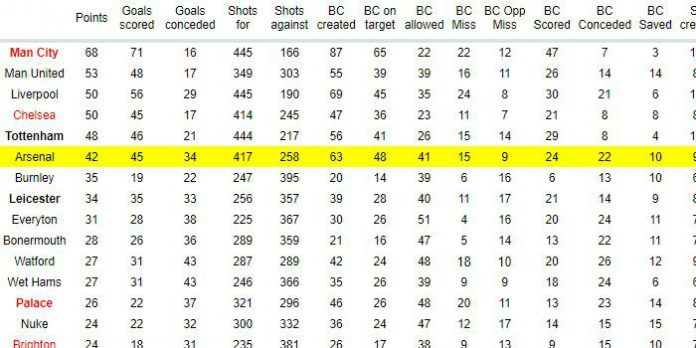 Matchday 26 has come and gone and Arsenal, despite the toasty win over Everton, are still stuck in 6th place in the Premier League table. Nate Silver’s model on FiveThirtyEight dot com only gives the Gunners a 17% chance to break out of the Europa League spots and jump into the Champions League spots. That number seems just about right for despite the 2-2 draw between Sp*rs and Liverpool and Chelsea’s massive cock ups of the last few weeks, Arsenal would need to overhaul two teams to get back into the top four. Not statistically impossible, just unlikely and a win over Tottenham would certainly improve the odds.

As for the underlying stats, Arsenal are Almost exactly where they “deserve” to be based on shots created and allowed. Sorting my table by expected goal difference, Arsenal should be in 5th place and Man U should be in 6th. But United keep pitching shutouts – they have five clean sheets in their last six matches.

But United’s luck seems to be holding. They aren’t even getting big performances from de Gea at the moment – in their run of six matches, de Gea has only saved 2 big chances (both against Stoke) and just three shots in prime (again, against Stoke but also against Tottenham). Defensively, Man U are literally relying on misses.

Looking ahead at the fixture difficulty rater, Man U have to play Chelsea, Liverpool, Man City, and Arsenal giving them one of the most difficult schedules in the close of the season. If they were ever going to “revert to the mean” and start shipping some goals, this run-in would be the time!

The team I thought Arsenal might overhaul was Liverpool. But they actually have the easiest fixtures list of any team in the Premier League. That leaves Arsenal to scrap for fourth with Chelsea and Tottenham.

Arsenal could finish above Chelsea who have to play four top six teams plus Burnley away and their manager looks like he’s going to get the sack. If Conte is fired at this point in the season, Arsenal should finish above them, because Chelsea’s underlying xG stats are pretty weak.

Looking out at the other stats like Big Chances and Shots in Prime we see that Arsenal’s weakness is defending. Adding Aubameyang and Mkhitaryan has made Arsenal’s attack sexy again but unless Wenger can get the team to play more compact – which actually suits Aubameyang, Mkhi, and Ozil – Arsenal’s defensive openness and inclination toward making mistakes (they lead the League in errors for goals still with 11) will continue to make it difficult for Arsenal to overhaul Tottenham for 4th place.

Arsenal have conceded 13 more goals off Big Chances than Tottenham or Chelsea. Perhaps both teams’ collective wheels could come off at the same time. And perhaps Arsenal could suddenly tighten up defensively but according to the stats of the season, that seems just about 17% likely to happen.

Just do the same against the diving team on Saturday as we did against Everton.

We’ll all take that.

The wonderful thing is how they all admit to diving. Hopefully the refs are listening:
Kane: “I didn’t dive. I felt a touch so I went down”
Poch: “All teams cheat, we used to get applauded for doing it”

And the Mike Deans and Jon Mosses of the world will absolutely reward them for it. Mike Dean to Harry Kane: “Ah, now lad, that was a bit cheeky…but well done. Penalty!” (points to the spot).

Seriously, there has been no discussion about how easily Kane went down. If it was Ozil, then we know both the referee’s and media reaction would have been quite the opposite, as it has usually been.

So we’ve built an integral of our goals to chance ratio, integrated the current algorithm and condensed all basic data to the point of py by defracting the Higgs boson and we’ve reached a conclusion : we are fucking shite at defending.

WTF are Burnley doing? Look at the jump there

Highly recommend checking out this tactics video that explains how Burnley defends: https://www.youtube.com/watch?v=NKHwUVYH4hU&t=2s

I believe with the 17% chance, we will make the top 4 Because we are ARSENAL and we love doing things the hardest possible way.

“so you’re telling me there’s a chance!”

In pre-season the Guardian predicted 6th place – I was incensed! Getting 5th above Chelsky but below that lot would be meagre consolation indeed!

Never tell me the odds.

I love the stats in general but feel that this is over complicated. The #1 predictor for league table position is goal difference. So far we don’t deserve to go up the table

It’s quite something that Burnley are one place behind us but have less than half the number of goals we do. Good for them.

Would be interesting to know what 17% becomes assuming we win against Tottenham. Surely 3 points against a rival would make our odds jump

With such a large statistical variation for United, could it be something they are doing. I think opta needs to have a new stat which tells us how close a Defender is to the opposition attacker when they shoot.

I’m sure there’s loads of nipple tweaking, Achilles scraping and shirt pulling going on at United under mou.