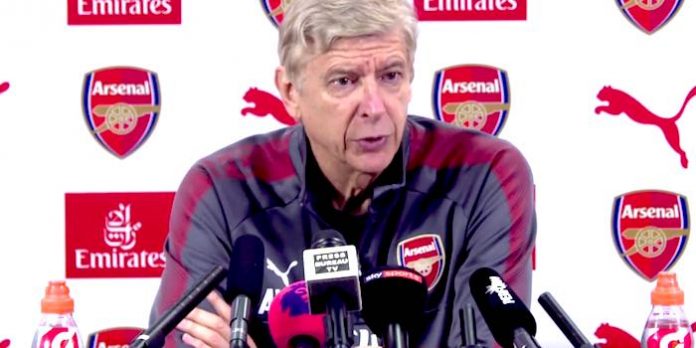 Arsene Wenger has provided the latest team news ahead of Saturday’s North London derby against Sp*rs.

The Gunners play the old rivals at Wembley, and beforehand there were injury and illness worries over Petr Cech, who picked up a calf problem in the 5-1 win over Everton last weekend, and Nacho Monreal.

Asked for an update on those situations and the potential squad for Saturday, Wenger said, “It will be a similar squad to Everton, maybe Danny Welbeck will be back.

“We’re unsure about Petr Cech, he has not practiced, so we don’t know if he’s available yet.

“Nacho Monreal should be all right.”

The manager seemed unconcerned about the prospect of playing his second choice keeper in a game of this magnitude.

“I have no problem with David Ospina, I will make that decision tomorrow,” he said.

“I will not take any risk with Cech if he’s not 100% because I have full faith in Ospina.”

Fuck me if we win this I’m going to go mental. If we win this, as far as I’m concerned, it’s a four way battle for top four.

Also we got a pretty solid record at Wembley of late… C’mon lads, don’t let us down!!!

Any keeper better than Ospina!!

Where’s Rami Shaaban when you need him?

Mart Poom might have a thing or two to say about that!!

The transfer window is closed.

Surprising comment from an Arsenal supporter on a player who has contributed to several wins for his team .. on the eve of a major derby …

Szczesny’s silk cuts to start in goal. You heard it here first.

In fact both our keepers are way below the top level that the other teams have.

Only de Gea is a top level keeper. Courtois and Lloris are good keepers while Ederson or Mignolet are worse than what we got.

Ederson worse than our options? What are they smoking in Berlin?

I disagree. I think it goes De Gea, Ederson. Courtois, Lloris as top class (in that order.) Then there are Cech and Ospina mixed in with all the rest in a pretty non-stand out group. Cech has fallen off a cliff entirely. He probably hasn’t been truly elite since his unfortunate head injury but since he joined us he dropped down a level again and this season he has probably made more mistakes then any other keeper in the league.

he left Chelsea before the real implosion to join a team that can’t string more than two solid defensive performances together in a row. In other words…he played at Chelsea when they were a defensive powerhouse. And joined a team where he’s facing a LOT more shots, scrambles, one on ones, be put under pressure by defensive errors generally and also anytime Xhaka plays. So while he’s going to appear worse as a result, i’m not sure quite how far he’s fallen in terms of his real performance level – but of course he has anyway due to age. But… Read more »

Hard to disagree with that

I agree with Jimbo’s initial point though. I don’t think has been an elite level goalkeeper since his head injury. I’d argue that the defence in front of him at Chelsea is what made him look so good. He didn’t look too hot when we beat them 5-3 at Stamford Bridge, for example (he was already getting beaten at his near post).

… what? the one in 2006? Think you’ll find he was MOTM in champs league final 2012 after making two penalty saves.

Wish he’d save a couple for us though

Shake Martinez all about.

Will be a big boost if we can do it.

And mikhis second hattrick of assists

The new attacking options we have, for me, mean that they won’t know exactly what to expect from us. This game feels like it is coming at a good time. Plus we love a drop of the Wembley open spaces. It’s tricky not to feel optimistic for this one at the moment. Come On You Gooners!

Pains me to say it but this will definitely be a more challenging test than Everton of our new players & how effectively they work with the rest of the team. While 6-0 would be great will settle for winning by the odd goal. COYG!!

Let’s go smash us some spuds!, and the lads should play this one with the proverbial ‘wenger hand-brake’ off!…..we’ve already smashed them in our own home game, so its up to them to try and win their one if they can.

Haven’t been this optimistic going into a north London derby for about 10 years.

I know that smash us all the time right? Its just weird that since the 07/08 season we’ve played them 26 times in all competitions, won 11, drawn 8, lost 7

Get back Fabianski! He’s better than Ospina at the moment in term of experience in the PL.

4-2-2-2 with Ozil on the left and Mkhitaryan on the right.
Play Ramsey in a defensive mode and unleash LMAO in the 1st half.

Xhaka will have 2 options for short passing in Mkhi and Ozil
2 direct options in Auba and Laca who will make them runs.

Now when Mkhi puts in that low cross we will have Laca, Auba and possibly Ramsey(3rd man) making runs in the box.

Who to, who to, Who to be
Reply to  ramgooner

I like it but it wouldn’t work our current CM and CB options, if we had a pair of proper DM’s then i think it would be highly effective, certainly its a nice option to have against lesser opposition. I wouldn’t line up like that at the etihad for example but it certainly is a nice option for next season should be strengthen our spine.

What’s up with your username?

Wonder if Wenger would try to squeeze in Ramsey and Wilshere in the same team for this one.

Think I’d be ok with that but given opposition I’d likely switch Elneny for Xhaka.
If you want to retain Xhaka slide him forward and leave out Jack. Spuds have a few smart movers and Xhaka has been poor tracking men of late.

jesus thank christ someone calling for elneny instead of xhaka in a game like this xhaka will switch of an cost us. if you play elneny we can do a back 4 – which we seem more comfortable with, he can drop back to protect the CBs when we’re out of possession…..and do a 4-1-4-1 with ramsey, mhiki, ozil and Iwobi behind Auba.

Could go all out with a 4-1-3-2 and get laca and Auba starting with ozil, mhiki, ramsey all switching positions behind them too. that would be amazing fun to watch.

that would really encourage the verticality wenger craves.

Xhaka at left back.

Left back in the changing room.

Am OK with absolute 3 points…

My prediction? Ospina will save a Kane penalty, Anthony “dishonest to your federation” Taylor orders a retake, Kane blazes over, Taylor orders another retake…

Or they just get 3 penalties in the game- they got 2 dodgy ones last week. How many of his 100 PL goals have come from dodgy penalties?

Not many tbf less than 15 if I remember, he’s a lying cunt who can’t talk but he can put the ball in the back of the net better than any other English player atm.

The funny (strange, rather than ‘ha-ha’ funny) thing about Kane is that he was released by Arsenal at the age of 8. What criteria do they use to decide whether an 8 year old will make it or not?!? Seeing as how they don’t get paid, it seems weird to get rid of kids at that point unless they can’t even kick a ball.

i think they screen them early and can tell they are spurs men by a rash. then its the door i’m afraid…potential or none.

Kane was dripping saliva from his gaping mouth all over the training field. Arsenal is a clean and classy club we cant have that.

“off to spurs with you you drooling mess”

Released by Arsenal? Well he can’t talk now, so age 8 he was probably struggling to count. That’s my bet.

Not just any English player but everyone in the league in the last 3 years. ( our new 14 apart hopefully)

And he did top even Messi and Ronaldo but being a spud, I laugh when they market the likes of Neymar and Dybala for the Balon d’or ahead of him.

Dunno by 100% of Aubameyang’s PL goals have come from dodgy offsides.

I did not see it so I cannot say for sure.

Ozil\'s little popped finish (you know the one)

Give Matt Macey the Gloves, sink or swim. We did it with Szczesny against Man U a while back and he didn’t sink (‘least not for a while)

If we threw him in behind this defense he’d be on the fast track down Szczesny Lane. Let’s not do that. Let the vet and the guy on his way out take the trauma until it’s sorted.

Does it mean we get a lot more seats than normal for our away section?

Nope, we got 3000, bare minimum. Sp*rs are a pretty petty club to be honest, I suspect they’d give us less if they could, they’re still in a huff about the cup game at ours a few years back where the Met set the allocation at ‘only’ 6000 and have been shafting us for tickets ever since. As an aside, because of the FA cup gate receipt split, Sp*rs made more from that game than any home fixture in the club’s history.

I would take a back 3 – and give Holding another shot – allowing Nacho to push up more.

Why the so lack of confidence in Ospina?
If Wenger is confident to play him….that’s good enough for me. Lets get behind the team… whoever gets played

This website uses cookies to improve your experience while you navigate through the website. Out of these, the cookies that are categorized as necessary are stored on your browser as they are essential for the working of basic functionalities of the website. We also use third-party cookies that help us analyze and understand how you use this website. These cookies will be stored in your browser only with your consent. You also have the option to opt-out of these cookies. But opting out of some of these cookies may affect your browsing experience.
Necessary Always Enabled
Necessary cookies are absolutely essential for the website to function properly. These cookies ensure basic functionalities and security features of the website, anonymously.
Functional
Functional cookies help to perform certain functionalities like sharing the content of the website on social media platforms, collect feedbacks, and other third-party features.
Performance
Performance cookies are used to understand and analyze the key performance indexes of the website which helps in delivering a better user experience for the visitors.
Analytics
Analytical cookies are used to understand how visitors interact with the website. These cookies help provide information on metrics the number of visitors, bounce rate, traffic source, etc.
Advertisement
Advertisement cookies are used to provide visitors with relevant ads and marketing campaigns. These cookies track visitors across websites and collect information to provide customized ads.
Others
Other uncategorized cookies are those that are being analyzed and have not been classified into a category as yet.
SAVE & ACCEPT
wpDiscuz
73
0
Would love your thoughts, please comment.x
()
x
| Reply