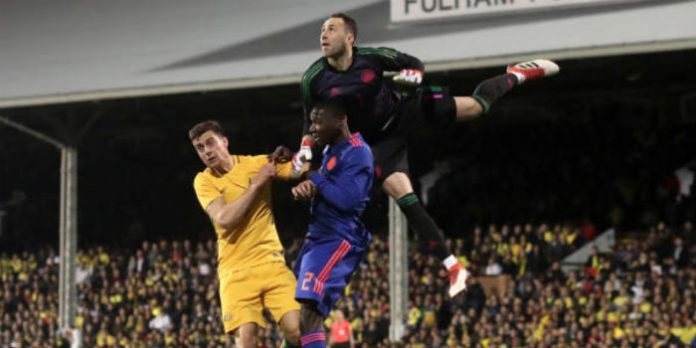 The Interlull is over. It’s done. Kaput. Finished. As it’s banished to the annals of banality (bannalished, if you will) we take a look at what the first team squad have been up to.

Some of them played football. Some of them didn’t. We’ll leave you to judge who enjoyed the last fortnight more.

David Ospina
Made an absolute howler to gift Olivier Giroud France’s opener at the Stade de France and conceded another before Colombia struck back in the second half to win 3-2. Impressively, he managed to keep a clean sheet in a 0-0 draw with Australia at Craven Cottage despite the Aussies tampering with the ball.

Petr Cech
Spent most of the first week testing new mattresses for his spare bedroom in Ikea. He’s going to think about it some more before committing. Did some drumming, learnt Flemish fluently.

Per Mertesacker
Made a couple of trips to the bank to deposit all the cash he made from fining Alexis Sanchez in the Chilean’s last few months at the club. Informed Ivan Gazidis that it’ll pay for all the extra seats being added to club level this summer, but did question why such seats are needed given the stadium is really empty these days.

Laurent Koscielny
Sat out Les Bleus’ defeat to Colombia but returned to play the full 90 minutes of a 3-1 win against Russia in Moscow. Afterwards, Olivier Giroud said he’d played ‘Laika Boss’…the pun was lost on him. But he smiled anyway.

Rob Holding
Spent a day filing some old bank statements, took out a new home insurance policy, cleaned his dishwasher, bought some new bedding, dropped off some old clothes at a local charity shop, had a trim and bought himself a giant Easter egg.

Calum Chambers
Spent a day filing some old bank statements, took out a new home insurance policy, cleaned his dishwasher, bought some new bedding, dropped off some old clothes at a local charity shop, had a trim and bought himself a giant Easter egg. Because that’s what Rob did.

Hector Bellerin
Brushed his hair. Full two weeks, that’s all he did.

Konstantinos Mavropanos
Rode the London Duck Tour, the best amphibious guide to the capital, 14 days straight. Now facing a huge fine from Per Mertesacker for missing so much training.

Sead Kolasinac
Got an assist as Bosnia and Herzegovina beat Bulgaria 1-0 in Razgrad and played 74 minutes in a 0-0 draw with Senegal. Found out his name is an anagram of ‘Koalas Candies’.

Henrikh Mkhitaryan
Started the week being crowned Armenia’s greatest player of the millennium, despite there being another 982 years to run. Captained his country to a 0-0 draw with Estonia and a loss to Lithuania.

Aaron Ramsey
Desperate not to spend two weeks with Ryan Giggs’s Wales, he asked Colin Lewin to perform a ‘minor procedure’ on him. The flu jab went well. Used the rest of his time to read up on the plight of white rhinos. It made him sad.

Jack Wilshere
Had been due to play for England against Holland Italy but his knee flared up. Spent a few days with an ice pack on his knee thinking about how Jesse Lingard might be the most annoying cunt he’s ever met. Returned to London Colney where Rob Holding agreed with him.

Mesut Ozil
Did some lush skillz to outwit Barcelona’s grey hobbit Iniesta as Germany drew 1-1 with Spain. Suave, but bum-sniffing, boss Joachim Low then sent him home to play with his pug Balboa.

Granit Xhaka
Captained Switzerland to a 1-0 win over Greece and then scored a penalty in a 6-0 thumping of Panama. He told the Panamanians not to worry about the result as they have England in their group at the World Cup and that’s a guaranteed 0-0 draw at least.

Ainsley Maitland-Niles
Played for England’s under-21s as they won 2-1 twice against Romania and Ukraine 2-1. We don’t know what else he did, but he probably looked very relaxed doing it.

Mohamed Elneny
Signed a new contract at the Emirates and helped contract dude Huss Fahmy feel important by letting him be in the pics. Played for Egypt as they lost 2-1 at the death to a brace by Portugal’s shiny muscle Ronaldo. Also played in a 1-0 defeat to Greece.

Alexandre Lacazette
After five weeks recovering from knee surgery, Alex was back kicking a football in training.

Pierre-Emerick Aubameyang
Somehow got out of Gabon’s match with Thailand in Bangkok (they lost on penalties since you asked). Spent the rest of the week wondering why Vic Akers wears shorts 365 days and then realised he may be a ‘never nude’.

Alex Iwobi
Played an hour as Nigeria beat Poland 1-0 in Wroclaw then lost 2-0 to Serbia at Barnet’s ground, the Hive. After years playing there for Arsenal’s reserves, he was gobsmacked to realise that the Hive is called the Hive because Barnet’s nickname is the Bees.

Danny Welbeck
Came on for 23 minutes as England beat Holland in Amsterdam 1-0 then couldn’t believe he was left on the bench as the Three Lions drew 1-1 with Italy against the one keeper he’s actually scored against recently.

I didn’t think Arsenal reserves played at the Hive? I know they played at Underhill, but I thought the agreement ended when Barnet moved?

they mostly play at meadow park, the Boreham Wood ground, for some reason our town is Borehamwood but the football team have a gap in there

Whereas things are going great for Alexis… https://www.birminghammail.co.uk/sport/football/football-news/sevilla-alexis-sanchez-manchester-utd-14447946

Didn’t get many plaudits for Chile v Sweden either.

Turns out he is trouble, brilliant!

Perhaps he does better in an attacking team with creative players, like Mkhi

He prefers getting knocked out at the round of 16 just that now he’s being paid 450k per week to do it.

You can call me Al...munia

Yes it’s over at last.now let’s get back to football that matters.

Anonymarse
Reply to  89 was fine

Are you taking the piss?

Through the years, every Blog’s international round up goes hand in hand with a mention about Giroud scoring goals, but now he’s not our players anymore. Makes me miss the dude already. 🙁

Oh man Ball Tampering! You are a genius ?

Did they stab it or something

I believe he was referring to the Aussie Cricket shenanigans

I have accepted you as my Sensei

As a Nigerian you just wonder when will Iwobi acutally grow up to know that you dont show skills when you are not winning. In other news what is actually wrong with Argentina

It was only 1 prank call to Charlie Adam. The other 72 were explaining why he needed to catch his fridge.

Sadly, he still doesn’t get it

So there I was flicking sports channels manically, in case id made a mistake, and there was indeed a footy match on that wasnt a boring international friendly, and I came across this disgusting programme……….Giggsy and Gazri Neville discussing great Man U players and victories.
The remote couldnt react quick enough to my sweaty selection of delete, or off, or change channel etc etc, and my tee shirt was covered in puke, and it all happened so quickly

“Never nude” eh? Wondering if he also blue himself like that other never nude