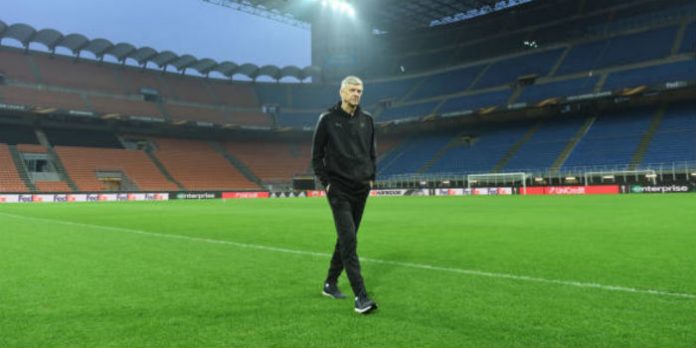 Arsene Wenger is confident that his players can get back to winning ways when they face AC Milan and urged his players not to forget how good they are despite losing four games on the bounce.

The Gunners have been in wretched form so far in 2018, exiting the FA Cup, losing in the final of the Carabao Cup and falling adrift of their rivals in the chase for a Champions League spot.

Ahead of their last sixteen Europa League first-leg clash at the San Siro, the boss called on his players to focus on making incremental improvements as they look to restore lost confidence.

“In life you forget quickly how good you are,” he told press on Wednesday evening.

“When you have a bad week, players change their mind on their own quality. [We must] not forget we are good football players but as well to fix reachable targets.

“Be practical, pragmatic – focus on what you can do better and analyse well what you didn’t do well and not be scared too much about the consequences of a bad result.

While Wenger accepts that the pressure is on his players to deliver success in the Europa League he hopes that having a single aim will focus the minds of his players.

“This is an opportunity for us we have to take. It increases the pressure on you in this competition but as well it is certainly difficult when you go through a patch like that.

“I believe as well it is a good opportunity. You want to show you have the quality and the strength and you can only show that when it is difficult. That’s a good opportunity for us to show as well that we can deal with that and for the longer term make the team even stronger.”

Hope focus comes in and gets us a couple of goals and pragmatism should shore things up at the back.

I just hope that whatever happens tonight doesn’t effect any wheels of change that are (hopefully) already in motion behind the scenes.

I want us to beat Milan and I want a new manager next season. I think we deserve both.

I love a good Spurslol but let’s not get ahead of ourselves.

Enjoy what you can friend, that was hilarious. But, man I wish we had Allegri (or equivalent) – Juve were played off the park in the first half. Little did Spurs know, he had them exactly where he wanted.

Suddenly he has Asamoah on and they go on a flurry hit Spurs with two goals. Game over.

Thing is they have that South American “unpredictability” up front with Higuain and the superb Dybala.

We are fundamentally lacking one or two of this sort of technical wizardry at the moment, particularly out wide.

Don’t you know we have Iwobi or Welbz on the wing? Be confident in your team. People tend to forget how good their team is after a bad week.

Now now. I’d say that we should ALWAYS get ahead of ourselves when LOLenham do what our very own Arsenal used to do -remember THAT Anfield UCL game about a decade or so years back when WALCOTT of all ppl went on a solo run which resulted in THAT Adebayor goal?- BUT…..waaaay better! 😀

Strangely, I’m actually looking forward to this game. Chances are we’re gonna get mullered, but I got a sneaky feeling we might surprise a few people. COYG!

Wow so you expect the team to loose but if we beat this milan team what does it really change?

Somehow I feel the same way – out of no where I’ve got a good feeling about this.

Eh? What nonsense. I’d say that 2017-18 Arsenal team is the FAR BETTER (on paper) equivalent of the 2005-06 Arsenal team (same league tragicomedy was happening then also IIRC) that went all the way to the UCL finals and was within 12 mins or so of winning the damn thing against THAT Ronaldinho Barca!

So I’d say that we ought to be favourites against a slooowly reviving Milan team. Especially when it’s being managed by Ringhio coz well, even the current version of Le Proffeseur >>> manager version of Snarl (atm). Surely?

Kwame Ampadu Down
Reply to  Sandman

Hmnmm…..far better ?
That team though had a central spine of Lehmann, Toure, Gilberto/Cesc & Henry…..& the quality & leadership they had raised up he rest of the team.

Don’t get me wrong, I think we can pull this off tonight if we turn up but I think your comparison is way off.

Pedant
Reply to  Kwame Ampadu Down

Agreed, if we had Gilberto in the middle we would be far better up front (they would be freer) and in defence (more secure).

The above is the equivalent of the boxing coach in the corner after losing the first few rounds telling his boxer “you’re losing but you can still win this. You just gotta hit him more and hit him harder”.

Ye, I don’t expect him to come out to the public with details of his tactics and plans to turn the team around… To use your analogy, that would be like a boxer and his coach telling the gathered media, at the weigh-ins, what their favourite combinations are and how they’re going to utilise them….

tactics? Wenger uses tactics? since when?

Thing is, they do that a lot. They will openly say what their opponents weakness is and how they will expose it (and the good ones do).

And your point would be more valid if arsenal showed that level of tactical application in gamesmanship consistently, especially as Wenger usually sits on the side and does nothing.

Saying you’re going to exploit someone’s weakness is not the same as openly stating your weaknesses/strengths. I follow a bit of MMA and the only one (seriously, I’m not going to count McGregor’s flamboyant callouts and all the guys that imitate him now) that comes to mind is Jon Jones telling Cormier that he’s going to headkick him and he did. See? That’s on Cormier for not kicking the habit of leaning when he anticipates a low kick. I don’t get your second point because in the time I’ve been supporting Arsenal I have never heard AW talk about his… Read more »

My pragmatism tells me it’s time to move on.

Lol let’s just be well bitter about everything lol

Ah shit, actually maybe we are.

Gattuso once tried to nut a spurs coach. He’s a likeable chap

I should clarify, that’s what I hear when the once great Wenger says these days…..white noise..

Wenger says that when you have a bad week, people forget how good you are. Which is true, but totally irrelevant in the case of Arsenal. We have had bad weeks consistently for well over a decade now which have scuttled our seasons effectively in the Premier League.

I get it, he can’t come out and say it in the media anything other than what he does right now, but I just hope deep down he knows the malaise that’s running through the club. And that malaise has crept in when he was steering the ship.

I’m calling for a rare one off elusive win please Mr wenger.

so: “When you have a bad week, players change their mind on their own quality. [We must] not forget we are good football players but as well to fix reachable targets. “Be practical, pragmatic – focus on what you can do better and analyse well what you didn’t do well and not be scared too much about the consequences of a bad result. “Focus on defending better, playing quicker and doing more things together. Reachable targets to improve the team” —-Gee, I’m all fired up now. Truly inspirational quotes to rouse the troops. FFS. Can you imagine what Gattuso is… Read more »

Basically “We must be practical. We’re not going to win. We need to lose by no more than two goals.” That’s what I hear with such passionless drivel.

I think we need to consider how Milan play. They have similar issues to us. When they push up, they cede space behind their fullbacks. Also in between the lines, Gatusso has tighten that up. He has Biglia in a discipline role just on front of the Cbacks even if its a flat back 4. They line up in a 4-3-3 but they go 4 in midfield in front of the DM and behind the CF Cutrone. Both Kessie and Bonaventura have goals in them and bomb forward. At the same time Suso and Cahanoglu like to drop for the… Read more »

Wilshere – Ramsey axis.
Mkhi on the right. Welbeck up top.
Ozil at 10
Iwobi on the left. We should be able to control possession with this line-up.

Cool, well given your extremely factual tone I’m guessing you’re someone working in the game with years of experience both playing and coaching. Someone just let Arsene Wenger know that a total randomer on Arseblog’s comment section has got it all figured out!

Lets get behind the team! Lets cheer for them!
Looking at the Sp*ds fans, they were cheering their team all the way despite knowing the team was on the way out and that they are not going to win anything again this year!
Why I give this example, coz we are definitely much much better than those lots across at Black heart Lane. So please dont behave as if we are worst than them.

Everything football aside, I believe this is good life advice.

Had me until “longer term”

Listening to Allegri talk after f**king Spurs up and you realize how much this team needs a real coach. One who really reads the game and reacts accordingly with tactics change and the right substitutions at the right time. They were losing the game and two changes later, game has been turned on it’s head. No wonder the boys sent out an SOS last week.
Who was it said Wenger coaches by default again?

Nobody should say “as well” that many times. I can imagine him saying it and it’s frustrating.

You were asking for this reply, as well.

They’ve lost faith in you, not themselves.

All true but I guess some people won’t be happy whatever he says as long as he says it as manager of Arsenal. Victory vs Milan please….so I can return to reading comments for insight and humor and not just hate

Lets get behind the team! Lets cheer for them!

Looking at the Sp*ds fans, they were cheering their team all the way despite knowing the team was on the way out and that they are not going to win anything again this year!

Why I give this example, coz we are definitely much much better than those lots across at Black Heart Lane. So please dont behave as if we are worst than them.

When you have a bad week? Its been years of this shit – does he ever look at results and league table? He is a bloody awful manager – how can you solve problems when you obviously deny their existence? I expect a resounding victory for Milan tonight – Arsenal are simply a bang average team with zero confidence or leadership within the team or from the manager. No doubt he will sit there in the dugout and do nothing like he always does. Arsenal should be grateful they are sixth because if we had this form at the beginning… Read more »

How about tactics and a plan? Just saying. ..

I’d even settle for the players just knowing their roles and responsibilities in general.

As long as they are wearing their trousers again all will be fine.