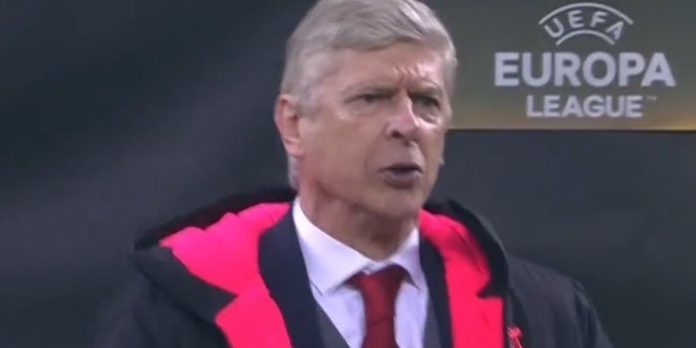 Arsene Wenger says last night’s 2-0 win over AC Milan will help restore some confidence to his beleaguered side, but has warned his players not to take anything for granted ahead of next week’s second leg.

Goals from Henrikh Mkhitaryan and Aaron Ramsey set the Gunners on their way to a first victory since February 15th, and the Arsenal boss is hopeful that beating the Italian giants will be a short in the arm, like a Man City player who goes to a special doctor when he gets injured.

Speaking afterwards, the Frenchman said, “The result will lift the belief in the team again. When you lose three games in six days, it’s always very difficult.

“We want to keep our focus and finish the job next week. That’s what the target is.

“At some stage, you need to respond and respond together with a good performance. That’s what we did tonight.

“We are not qualified. We understand that and we have to finish the job at home.”

Wenger again highlighted the damage he thinks was done by the Carabao Cup final, saying, “It’s difficult to recover from a defeat in a cup final when you put so much effort in. You’re always in danger.

“That’s what happened to us because we had no time to recover, no breather. We had our backs to the wall tonight and we had to respond. That’s what we have shown.

“We needed to find the mental resources and not just accept it.”

Anyway, it’s a small step in the right direction, and fingers crossed it helps us get some revenge on Watford on Sunday.

For more on the game, check out today’s brand new Arsecast

He is Mr Balanced, unlike most of us fans.

4 home matches now in a row, 5 of the next six at home (bar Newcastle away). Chance to start getting in the winning habit.

Hope Deeney plays on Sunday and we can all show him our
balls……please do it…..it will really make me fucking happy

As shit as we have been, we were owed a performance and they all turned up. We can’t get complacent but what a way to turn our away day frowns up side down.

Even chucked 100 on the gunners for a win and will be drinking and laughing with those winnings at that twat CEO or president of AC Milan who thought they’d already won the tie. Cheers cunt!

They shot temselves in the foot painting Milan as this team on the rise, unbeaten in 13 games (never mind not all of those were convincing wins)

Scratch Gatusso off as another of these maverick managers trumped up by the media who have succumb to our fossil Wenger (There have been many, just see Spurs recent 2 decades prior to Ponch)

Same team, but this time it will be Aubameyang you cojonesless Overweight Deeney!

The worry will be defensive again.

They will sit deep like a coil spring, absorb us and take us on the counter when inevitably we lose the ball.

BUT if the front men can be more lethal and less forgiving with their chances, it may be easier for the back.

Its an issue that corresponds as much to our midfield shape and our defensive concentration.

All problems need a holistic solution.

Good result but we need to win the reverse game convincingly. Also, short in the arm? I need one of those lol!

If we could keep a fit Aaron Ramsey for a whole season I genuinely think we’d be in a different position in the table (for the better). In our last Prem game it was so easy for Brighton to defend, everyone except for Aubameyang ran towards the ball. Ramsey running behind just stretches that bit of space and it’s soooo important as it gives our creative players the angles and room to do their thing. Shout out for Welbeck for also doing the same, I think he gets a bit of a run he can start finding the back of… Read more »

Dunno about our position in the table, but my word does he pop up with important goals?! Loves the big occasion. Wembley multiple times. The San Siro.

Does not go missing on the big occasion

Even the legendary Bentdner TGSTEL came up with important goals.

Even if Danny only occasionally finds the net. We have those who can when he doesn’t. He works hard. Yesterday, at 90+, he tracked back into the box to intercept. EL is Danny’s time.

Even a broken clock is right twice a day. The problem is we tend to think certain players are the be all and end all solution to our problems. In truth, we need to vary our players/tactics to suit the teams we face. Just because we break down an open Milan side who were (too) confident to have a go at us thereby ceding space behind (I said they have similar issues to us defending) does not mean we will face the same tactics in Watford. Most teams camp within their box in two banks of 5. We try to… Read more »

Ramsey’s problem is he tends to lack discipline and is prey to his better instincts which is to attack. We saw this issue when he was paired with Flamini. The pair actually held well together for a stretch when we were bereft of some of our top players and we won important games against City and Olympiakos. But when (ironically) Alexis and the likes returned to fold, we started to dry up in front of goal and Rambo tried to make a difference venturing further up field. To be fair to him, his role in midfield as the carrier is… Read more »

Major difference was that this was away from the Emirates , and away from that section of fans who create a negative atmosphere and putting pressure on the team .

Very important that the fans at the Emirates fully support the team and do not create a negative atmosphere .

See how the 70000 fans of Milan stayed behind their team Evan when they were 2 goals behind .

Kwame Ampadu Down
Reply to  Superfrog

Yeah, cos we’ve been brilliant away from the Emirates all season !

By all means call for people to get behind the team but have a look at the league table including both home & away results and you will see how ridiculous your statement is. Our home form is simply not the problem.

Aminu
Reply to  Kwame Ampadu Down

If i get the stats well, we ve lost 14 away games in the EPL this season the worst I have seen from the gunners so far.

We are not good away from home. Not sure why you got all the down votes from.

Its hardly an excuse but the fans can make a difference.

Forget the Carabao cup, it was bowing out to Forest in the FA cup which was the true disappointment. We haven’t covered ourselves in glory thereafter.

The poor form stretches much further back and the erratic displays (away) all season.

We did not reinforce midfield last summer and we did not utilise January properly.

Its the europa now.

We will need to maintain focus. Job is only half done.

But should we go all the way to the finals, Athletico seems to me to be the most dangerous team.