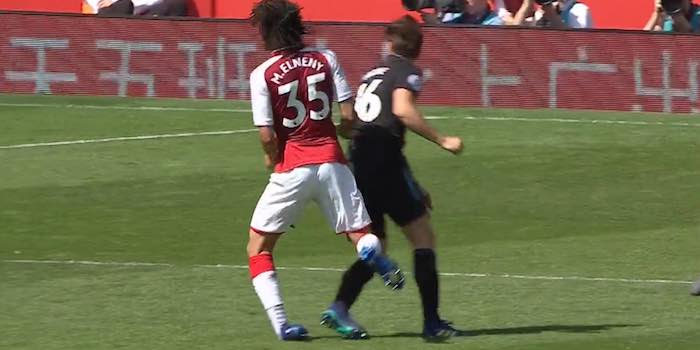 Arsenal have confirmed that Mohamed Elneny has suffered ligament damage to his ankle after he went off injured in the 4-1 win over West Ham on Sunday.

The Egyptian international landed awkwardly towards the end of the first period, and after some lengthy treatment left the field on a stretcher.

In a statement on the official website, Arsenal said, “Further to assessments and scans on Sunday and Monday, we can confirm that Mo Elneny has sustained ligament damage to his left ankle.

“We are hoping that Mo will available for Arsenal again this season and we are keeping in regular contact with the Egyptian Football Association.

“The midfielder was injured just before half-time during Sunday’s 4-1 home victory over West Ham United.

“Further updates will be made in due course.”

It seems unlikely that he’ll be fit again for us this season, but we can keep fingers crossed, and also that he makes it back in time for the World Cup this summer.

Elneny keen to impress after feeling the love

Elneny: Arteta has told me he needs me on the team

I don’t care if he can’t play for us the rest of the year, well I do, but I hope he can play in the WC because it would be a sad twist of fate after the ribbing he’s given to Alexis.

There was a young man named Elneny, who is underrated by many, he’ll pass to the side, but be sure he won’t hide, it’s a shame he’ll miss out on the semi :'(

Bad news.. We will miss him surely.. He is been top class in the last few weeks.. Get well soon Mo..

Sad, it’s not worth rushing him back. Give him the time to recover properly!

Looks unlikely to be this season and probably even the World Cup, poor b*gger.

I really hope that he makes it to the World Cup. He has deserved it.

Fucking hell! This is heartbreaking. My favourite player this season (it’s between him and laca). He’d better show up for the world cup, accursed injury gods.

Couldn’t have happened to a nicer guy, it’s a shame. Hope he recovers quickly, he’s been one of our most consistent players, and just seems all around a good guy. Good luck to him.

Big shame, has emerged as a valuable player this year and in great form recently.

We’ll miss him against Atletico – especially in the away leg.

Looks painful but that kind of injury can last as little as 3 weeks. Fingers crossed for the lad that he makes it to the World Cup

Yes we will miss him as a starter in those games or coming in as a sub if we have a good lead in the 1st leg elneney is the guy to help protect the lead running and closing everywhere.

He became our consistant midfielder, the one making himself available for everyone as a pass option. A real shame, we’ll surely miss him on thursday, hope he makes it to WC. He fought for it

Gutted, I have been singing his praises for some time and just recently he has been really stepping up for us. Really seems like a good guy and he really loves playing for Arsenal, I wish some of the others spoke so passionately about being an Arsenal player. I hope he recovers quickly, maybe in time for the second leg but if not then either the final or the World Cup. Best of luck Mo. Rapidly becoming one of my favourite players in the squad.

Reminds me of John Jensen injury in 1993…

Would be great if we finished this season the same way….

Will he be back next season? To Arsenal i mean.

He just recently signed a new contract. So unless the new Gaffer is a heartless bastard that can’t see his potential, yes.

Sure, there have been some successful heartless bastards, but I really want to see what Mo’s capable of.

We really needed him for the Europa league. He seems to be a steady head whilst others are losing theirs. Best wishes for a speedy recovery for your world cup campaign Mo!!. ..

Get well soon, Mo. Dunno if you’ll recover in time for the World Cup but crossing toes and fingers for you!

Rather unfortunate. Him tweeting all those snide remarks to Alexis and its come back to haunt him. What’s the German word? Schadenfreude? Hope he recovers in time for the world cup. Meanwhile it does highlight the paucity of options for us in midfield. We have Jack ready to step him and hopefully the rest will re-invigorate him for Thursday’s crucial ‘final’. Ramsey can also play there but is better higher up the pitch. Frankly Granit to me was MOTM yesterday. An excellent display from the Swiss who controlled our tempo from midfield and got stuck in. BUT AMN was “OK”.… Read more »

Superb display by Granit against West Ham. MOTM for me and Adrain Clarke.;) Hope he keeps improving. He is vital to the rhythm of this team. I like his accurate and long forward passes which helps us transition quicker. Likely he won’t be heralded by the usual stats merchants. They prefer to highlight AMN but Granit’s passing completion rate was 92% and he made 50 more passes than anyone-else on the pitch just saying. Some tasty tackles too. Looks like we have him in a Regista role sitting deep, not entirely a DM but a deep lying playmaker. That would… Read more »