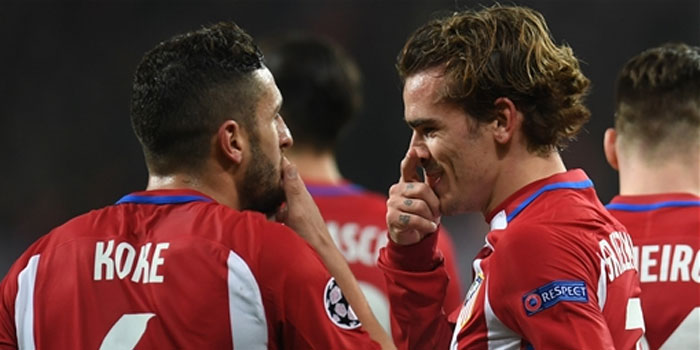 Let’s get stuck right in..

What’s interesting about Atleti is that they have a lot of players who make these types of passes in la Liga. Costa is averaging 0.7 per game; Gabi 0.4; Angel, Koke, and Torres average 0.3 per game; and Niguez and Griezmann 0.2.

There is a worry that Atletico will target Özil and make the rest of the team beat them. Ozil leads both the Premier League and Europa League in key passes per game (3.2 and 4 respectively). And the vast majority of Özil’s key passes come from open play – he only has 15 total key passes from all of the corners and free kicks he has taken this season.

The drop off from Ozil’s 4 key passes per game to Jack Wilshere’s 1.7 is pretty steep. Iwobi averages 1.8 per game in Europa League and Mkhitaryan 1.6. The takeaway is that Arsenal are highly dependent on Ozil to create.

Meanwhile, Atletico don’t have a single player to focus on. Looking at their La Liga stats Griezmann takes most of the team’s shots, 2.4 per game, but Costa takes 1.9, Niguez 1.5 Carrasco 1.5 and Angel 1.4. They also spread the creative duties around; Koke 1.5 key passes, Griezmann 1.4, Luis (a left back) 1.1 and so on down the list. Everyone on Atleti is told to make quick, short passes up the pitch and to shoot at will.

That’s another oddity about Arsenal: they take 75% of their shots inside the 18 yard box, Atletico Madrid take just 56% of their shots in the same area. This is Wengerball. Arsenal are a very patient team who are taught to wait to take shots until they can see the whites of their eyes.

Defensively, Atleti are also a crazy tackling team. They are first in the Europa League in tackles attempted with 43.2 (that’s nearly a tackle every two minutes) and third in tackles won per game with 26.5. And lest you think this is just something they do in EL matches.. They top all five European leagues with 36.6 attempted tackles per game and 24.3 successful tackles per game. Meanwhile Arsenal are dead last in successful tackles in the Europa League with just 12.9 per game and 10th from the bottom with 22 attempted tackles per game.

Despite tackling a lot they don’t collect fouls or cards for fouls, especially in midfield and defense. Atleti average just 11.2 fouls per game in the EL which is comparable to Arsenal’s 10.2. They have three red cards this season, one for Griezmann, one for Costa, and one for Vitolo (he’s a midfielder but he doesn’t play much) so their forwards can lose their cool. Niguez and Gabi will tactically foul to stop the game and have combined for over 100 fouls this season in La Liga and 19 fouls in Europa League. That’s something I wish Arsenal would do more of and Ramsey does lead the Gunners in fouls per game in the Europa League with 2.3.

Tackles and dribbles go hand-in-hand (foot-in-foot?) and Arsenal’s leading dribblers are Jack and Iwobi. I expect Atleti to target Ozil and Xhaka with aggressive tackling in possession and Wilshere and Iwobi on the dribble.

The remainder of their defensive stats are pretty close to Arsenal.

Atletico Madrid aren’t an anti-football or anti-possession team – they complete 85% of their passes and play 53% possession. They don’t play Allardycian “get a restart” football, they just tackle. A lot.

Their secret is.. they limit opposition big chances.

Domestically, Atletico have limited their opponents to just 39 big chances this season. That’s 22 fewer than Arsenal. Arsenal’s record in the Premier League this year is Wenger’s worst ever and Arsenal are on course to set a record for goals allowed so this is a bit of an unfair comparison but we have to make it because Arsenal are prone to errors in the League and can gift their opponents golden chances.

If we compare just the two teams’ European campaigns they are actually a lot closer to each other than I expected.

Atletico have a much improved attack in their European campaign compared to la Liga. They are averaging 2.67 big chances per game in Champions/Europa League play and 2.2 in la Liga. That is going to be a huge test for Wenger’s men, keeping that number down. Against AC Milan, Arsenal allowed 4 big chances, though crucially, just the one goal.

In conclusion, two things surprised me in looking at Atletico Madrid’s European campaign: their expected goals for and against and their last two matches against Sporting.

Both Arsenal and Atletico’s expected goals for and against are essentially identical:

Both teams’ defenses are performing above expected with Arsenal conceding “just” 10 goals and Atleti just 6. Both team’s keepers are saving at a high rate – Arsenal’s 70% for shots in prime (areas near the goal out to the penalty spot) and Atletico 60% in the same.

Now obviously Atletico had a higher class opponent in the Champions League stages, facing Chelsea and Roma. But Sporting gave Atletico a lot more trouble than I expected them to, getting four big chances and totaling 3.26 expected goals against 2.9 for Atletico.

This is surprisingly similar to Arsenal’s last match against AC Milan where Arsenal also allowed Milan 4 big chances and gave up 3.49 expected goals to 3.2 created for Arsenal.

I know that a lot of people are nervous about this tie and looking at Atletico’s domestic record (where they have 20 clean sheets, etc) you understand why. But I’m actually quietly optimistic that these two teams are evenly matched and as such this could be a really great two-legged match which is essentially the final.

You can ignore carrasco’s stats coz he’s gone to china innit.

Well we are the Arsenal, so this is never the final 😀

Arsenal have been written off already and this stats points to their effectiveness in game management. I will be glad if we can minimize loose balls and convert our chances, Football is a game of chance a la Arsenal vs Man Utd where we created many chances but converted one to the few of Manure and they scored three.

Stats sometimes doesn’t mean anything, it is the performance of the day that matters.

This piece does little for confidence, but I’ll take some solace from your optimism.

It was always going to be attack v. defense between Arsenal and Atletico. We have to withstand their ridiculous counterpunches with Griezemann, which may be more doable since Costa is going to be out. If we can avoid as many 1v1’s and maintain position in the middle and end thirds, then we have as good a chance as they do. The players have no room for schoolboy errors, but that is what’s most likely going to cost us the game. Indeed, the prospects feel bleak from a fan perspective, but I do believe this is going to be a great… Read more »

seems now all the action is at Le Grove ….

So we are facing a team a lot stronger than what Liverpool might face in the finals.

I think some of the discrepancy in domestic stats has to do with the comparative weakness of the bottom half of each league. I don’t want to get into how great the Prem is and all that nonsense, and I recognize that Arsenal have genuine defrensive problems. Even so, sides like Palace, West Ham, Southampton, and Swansea–all with legitimate relegation concerns–present a greater attacking threat than the equivalent Spanish clubs.

onenil
Reply to  A Different George

Is there a Diffrence, George?

let’s hope they lose with no away goals

“which is essentially the final.”

Was Birmingham really that long ago? Lest we forget to take any finalists for granted.

Brilliant analysis – thank you. Makes a mockery of the match previews the big newspapers put out.

The tackle stats are somewhat terrifying.

Speaking simply about the game tonight, then we can start looking at just our home record. I’d be very interested to see how we compare to Atleti when the away form is stripped out from us and the home form for them.