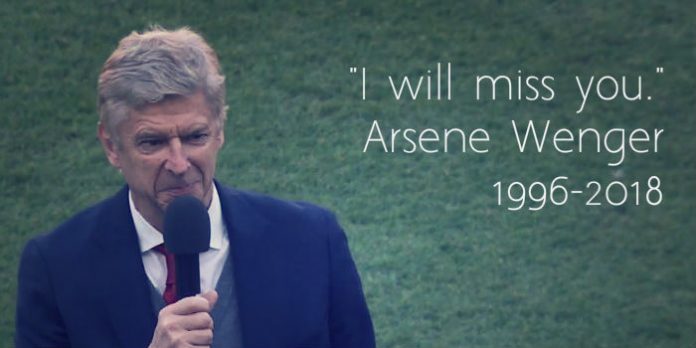 85 – Passes by Iwobi (tied for best of all players with Xhaka)
18 – Passes from Xhaka to Iwobi (most of any player)
18 – Passes from Bellerin to Iwobi (most of any player)
5 – “Bad” passes by Xhaka of 90 attempted because he “always gives the ball away”
2 – Number of bad passes by Xhaka that were in his own half
1 – Failed pass by Mavropanos in his own half, short
13 – Passes by Mertesacker (of 13 attempted, man we are really going to miss his class in passing from the back)

1 – Simple phrase that Wenger left us with “I will miss you.”
1 – Arsene Wenger

One of the prerequisites for a manager next season should be to play Aubameyang and Lacazette together.

absolutely. I really think they’re not too similar that they can’t play together, and in fact I like the potential chemistry.

if we can find a formation that allows them to play in their best positions and gets the balance right behind them (3-5-2? 4-4-2 diamond? certain versions of a 4-3-3?), I think they’re going to scare the sh*t out of opposing defenses.

Keeper (Would neither keep Cech or Ospina. They earn too much – especially Cech – to play second fiddle. Get in a quality number 1 keeper and get Martinez back to be our number 2) Mavropanos- Chambers – Holding ( I know, i know, that’s quite risky but next year will be a year of transition anyway and we won’t have the biggest funds for transfers if the rumors are anywhere near true, so I’d rather invest in other departments and give these 3 guys a season to show if we need to spend big on that position next season… Read more »

As long as Auba is free to roam in centrally, which is what he’s doing at the moment. He and Laca both had key moments in both central and wide positions against Burnley, was great to watch.

One thing I hope the new manager doesn’t do (and I don’t expect him to, any more than Arsene does) is listen to the fans telling him who to buy, who to sell, or who to play and where. Same goes for a director of football, if we appoint someone. That’s their job. And they’re not blind. They can see, for example (as Wenger has said) that Aubameyang and Lacazette can play together. But there are occasions, let’s remember, when that may not be the best for a given situation, or opponent, or a different formation is required. That’s their… Read more »

I cried while watching Arsene’s post-match speech. A gentleman full of class, and so articulate. Shall miss him and those Wengerisms. Wishing him all the best.

Here’s a good number – If Arsene Wenger stayed for another 100 games & lost them all, he’d still have best win percentage of any Arsenal manager in history.

We have been spoilt.

I was thinking about those home statistics while I watched the match. This season, we often looked the way we looked yesterday at home and almost never away. We looked about the same against Atletico in the first leg (yes, mostly against 10 men, but a much much better team than Burnley), though crucially we did not finish our chances then. So what is this about? The crowd? Officials influenced by the crowd? (I know this is probably the cause of some home advantage over the course of a season, but it’s hard to make a case that this was… Read more »

And a super tactical coach

It’s not a terrible shout, certainly not worthy of so many downvotes (though presumably you meant new rb not lb). Most would have Rambo in there, but not at the expense of midfield balance and not if he refuses to sign.

Ramsey really did have a good season. But he’s still a maverick positionally. He really is a cowboy. What’s my problem? He is everyone’s problem. That’s because every time he plays, he’s unsafe. I don’t like him because he’s dangerous.
😉

Ice-man? Maybe we need Bergkamp back to make the perfect partnership with Ramsey.

“1 – Person who deserves the blame for this utter asswhupping and his name doesn’t rhyme with “tape cassette” or “pick guitarian”. It rhymes with “Arsene Fucking Wenger”.”. – written a month or two ago. And now it’s “1 – Arsene Wenger”. False platitudes. Prefer the lot who bitched and moaned about Wenger, who continue to bitch and moan. All this nonsense on this site about…”we are all entitled to our opinions” (no fucking kidding)…”lots of us wanted a change but respect the man for what he did for Arsenal” (how very generous of you). Easy to stick by Wenger… Read more »

As an American fan for the last 12 years I am waiting to see how my Arsenal relationship evolves. Just as too many fans lost interest due to Wenger staying and not winning what and when they wanted him to win, I hope I do not become one who loses interest because the man I admired so much was forced out by spoiled fans. These fans are every bit if not more entitled, spoiled and rigid then they accuse the manager of being. I can not help but think of some of the what ifs: Cazorla stayed healthy, Kos stayed… Read more »

I totally agree with this. It’s been sickening to watch our fans undermine the team and manager when they needed them most.

Thanks for saying this. I would also add James from the Arsecast to this who belittled Wenger in his ‘On The Whistle’ video, I think from the West Ham game, after he had already announced he was leaving.

A lot of bollocks being spouted from people who should have known better at the time.

I’ve had to read your post three times, (it’s late) but I think I agree sort of? He did need to go but maybe the fans shouldn’t have given it so large? Is that it?

An aeroplane is bang out of order…

Hi Paul..my writing skills aren’t that great so I can see how it would be confusing. ‘Given it so large’ – that’s partly what I was on about. There were those who have gone overboard insulting the manager, or those who never really stood up to those insults with that whole ‘entitled to their opinion’ nonsense. Although with websites I get how you need to keep as many of your readers as possible, so can’t really censor those who are over the top or even tell them to knock it off. The thing that I find insulting – not sure… Read more »

I don’t blame the fans, competent upper level management (that’s you Ivan and Stan) would have seen the writing on the wall and not renewed Arsene’s contract several years ago, if not least last year. Fair play, they gave him another chance to turn it around, and he did not. Yes, the hypocrisy is disturbing, but it is on display every week, we win and everyone is great, we lose and everyone sucks.

For me, where ever you spot my moniker, I have been and will always remain a Wenger out person. Arsene and Arsenal FC was destined to be and that happened. He did a lot of good things for the club, and along the line things happened to sour the relationship. If someone needs to be remembered, for doing a great job of getting a manager who was great, David Dein is his name. He left at a time, due to differences at the board level. A lot of the poor motion and slide downwards began when he was no longer… Read more »

Team for next season!

Three things i have to say,
1) Thank you Arsene for the memories, …..ONLY ONE ARSENE WENGER!
2) Thank you lads for a befitting last home game for Arsene and showcasing wengerball at its best!
3) i really really like this Mavropanos kid….and judging by the reaction of the fans in the Emirates on Sunday, he is fast becoming a fans favorite!

The last one gave me chills. Well done sir