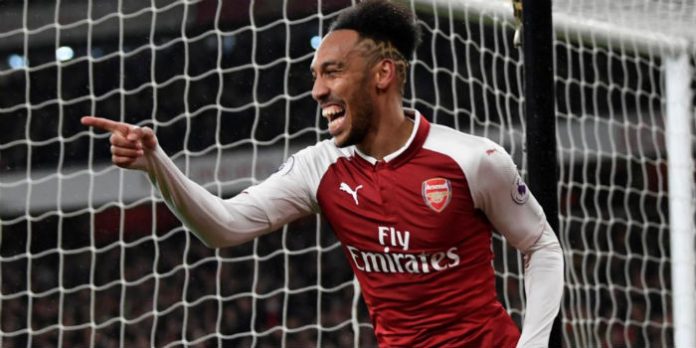 Pierre-Emerick Aubameyang says he expected to work with Arsene Wenger for years to come when he signed in January but accepts that football doesn’t always work out the way you expect.

The Gabon international joined the Gunners from Borussia Dortmund in a club-record deal on 31 January and has since banged in the goals for his outgoing boss, becoming the quickest player to ten goals in Arsenal’s history.

Aubameyang’s strike in the 1-0 win over Huddersfield will go into the record books as the last of Wenger’s tenure and the 28-year-old admits he was pleased to give the Frenchman a fitting send off.

“I thought he would be at Arsenal for years,” Aubameyang told Standard Sport.

“But this is life. This is football. Sometimes you never know. But I was happy to play for him. I learned a lot in not a lot of time to work with him. I am happy to be here.

Despite the early months of his Gunners career being pockmarked by enforced spells on the sidelines – he was cup tied in the Europa League – Aubameyang says he’s pleased with the way he’s got up to speed in England.

“At the beginning, it was really hard because physically I was not ready. I did not play in January, all month, so it was not easy.

“But after big work with the staff, I found my form again. I scored some goals and thanks to my team-mates, of course, because we work for that.

“These last few weeks we played well and we have a lot of young players. It is good for the future and I am sure next season will be a good season.”

Unlike many of his teammates, Aubameyang will not be heading to the World Cup. He’ll get the chance to put his feet up for a few weeks before embarking on pre-season under a new manager.

Excellent start to life at Arsenal, can’t wait to see what he’s gonna do next season.

I’m excited. We will have him in the Europa next season and we already scored the most goals there without him this season. He will have a summer to rest which means we can use him while Lacazette puts his feet up in August. It all works out really. My excitement will go through the roof is we actually sign a CB, DM, RB cover and a Left winger.

Don’t you think AMN has shown well when he’s covered at RB?

He looks like he could be really outstanding in midfield

lol jeez guys what did you disagree with? I guess a well rested, prolific striker and defensive investment for next season isn’t good enough for some…

We bought the Van Persie this time instead of selling him

I like the way you think. And you in know what? Why not! Looking forward to the next season, will be exciting regardless of what happens

will it, be careful of what you wish for

Here’s to 50 goals between them – no too worried about the ratio!

be lucky if we got fifty from the whole team

And hopefully we’ll get one more 25 goal winger/striker.
We could accommodate all 3 in a 4-4-2.

I think the new coach will sell Welbeck to buy a
winger who is a goalscorer.

There is no need to sell Welbeck. In the last few games we saw Iwobi start in that LW position. Iwobi can go to reserves. All we need to do is buy a ready made goal scoring Winger/Striker or move Auba to LW and play the new guy upfront with Laca. Mkhi and Ozil can fight for RW spot. Wilshere, Ramsey, Xhaka, El neny, Cazorla(or/and new CM) can fight for CM spots. We can get Meyer for free as a long-term Santi replacement. Iwobi, Niles can be helpful in rotation. They have to wait for their chance. If we get… Read more »

You’ve just said there was no need to sell Welbeck but he has no place in your own perception of how the new manager should go about things.

This was Arsenal’s matchday squad against Huddersfield.

So Welbeck stays where he is on paper.

“A free CM like Meyer wouldn´t cost much” yeabb I can agree with that.

Jesus. There is something called wages and signing on fee.

well, we hope he sells him

he has stuck around for years

Before Wenger announced the end, I was of the firm belief that Aubameyang would break the single-season PL record for goals next year as he is so suited to the last move in Wengerball. Hopefully our new manager continues the attacking approach and the team can realize the promise Wenger sees in them; it’s been a while since we had the league’s top scorer, but Auba looks good for it!

I think that is astute. It all depends on who we bring in as manager. There’s plenty of latent potential in this team particularly in the offensive end but it needs to be more efficient. We lack wide player(s) that can transition us quicker when we turn over the ball. When Granit (indeed Mustafi and Holding last game) releases the ball from deeper, we need someone who can hold the ball and take on players on his own without need to wait for reinforcements (nominally fullbacks) to join. Someone like Thauvin or Mahrez could be the key to unlock our… Read more »

Yet I still think Wenger would stick around for years.

Auba will work under Conte next year. Chelsea will let Conte go and Gazidis will be more than happy to hire him. A viable solution for me.

Conte won the league last year and is going to win the FA cup next weekend. That’s my prediction. Last year, lot of Arsenal fans were seeing him as the ultimate master of tactics etc…

A lot fo Arsenal fans were seeing Martinez as a tactical genius not too long ago.

Never mind him, some were even mooting Eddie Howe or worse Brenda Rogers.

A lot of Arsenal fans were seeing Chris Samba as the centerback we needed.

Don’t listen to those idiots.

This guy is amazing. Only wish we had signed him a few years ago. Really looking forward to watching him bang in more goals for the Arsenal.

Probably because that’s exactly what Arsene told him when he signed.

Interesting he regards Wenger highly, even in this terrible 6th place slump we’ve had.

Great lad, good to have a positive person on the team who will boost the others, even his rival Laca, plus score goals.

He seems to relish the atmosphere at the Arsenal and genuinely enjoys himself.

Plays relax with a lot more freedom and much of it could be due to chemistry/new challenge which Wenger would have hoped when signing him on.

It may wane of course if we continue to under perform.

Let’s just be happy that he finally left Auba!

I love watching him celebrate his goals too, because he’s always the first to acknowledge whoever assists him. The enthusiasm he and Laca show to each other when they score is also incredibly heartening and hopefully a sign of good chemistry, not just competition.

even when hes not involved in the goal he looks just as happy as when he scores, he seems like a proper team player

I’d anticipate a record breaking number of goals across the league next season, there are some excellent goalscorers and more teams are playing expressive football, it should be a good one and really unpredictable

“… under new manager.” Pinch pinch, that felt wierd, yet hopeful, I guess.

Shame this signing wasn’t made instead of Lacazette. If that were the case we probably would have won the Europa League as well as finishing at least 3 places higher in the league.

Hopefully next year Lacazette can prove me wrong but I can’t see him being top quality never mind top, top quality.

Gave you a thumbs up not because I agree with you but because of the last line.

Welbeck and Lacazette need to learn from Auba. PEA picks his runs so he can be found. Lacazette tends to get hidden expecting the ball to be played to him instead of moving toward the ball. This is why it was a bit of a laugh when certain people proclaimed him “world class” and “pacy” then moan that we weren’t finding him. If you watch the recent Henry interview, he mentions how Wenger gave him advise to make himself runs that his fellow players could find him bc frankly not everyone will be Fabregas or Ozil. Most play with head… Read more »

That’s at least the 3rd article in two days you’ve made a point about Laca’s lack of pace and not being ‘world class’, Give it a rest. We get it.

Everyone plays differently. Lacazette is not a poacher and runner, he is a shooter, yes he could run through, but he requires you to find him, watch the goal against Huddersfield and see that he was the one to pass to Ramsey, validating what Steve Bould said about him, being more like a #10.

Its underappreciated just how many players come here with there biggest reasoning being to work with Wenger.

I still can’t believe we got him. Great signing. I just hope the team around him continues to give him the support he needs, and also get their act together defensively.
If whoever comes in can sort out the defensive side there is plenty of ammunition in the forward positions to have a real go at the league.