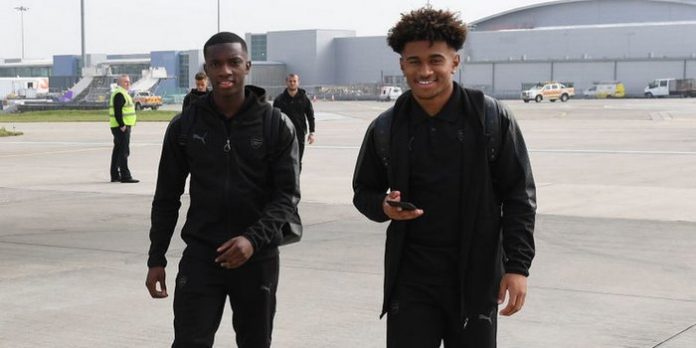 Two of Arsenal’s most promising young talents have been rewarded for their development this season with an award and an England under-21 call-up respectively.

Yesterday, Reiss Nelson was crowned the Premier League 2 Player of the Year for his performances for Arsenal’s title-winning under-23s.

Nelson scored 10 goals in all competitions and also helped Steve Gatting’s side reach the final of the Premier League International Cup.

“It’s so good to see him win the award. It’s really deserved, and there are a lot of people from Hale End that have played a part in getting him to where he is at the moment.

“Reiss will be the first to say he will want to progress on even further, and I’m sure he will be focused on that in the summer and looking forward to a new season.”

Nelson beat teammate Eddie Nketiah to the gong, but the striker can console himself with the fact he’s been selected by England at under-21 level for the first time.

Aidy Boothroyd has given the 18-year-old the nod for the Toulon tournament after the young Gunner scored eight goals in eight games for England’s under-19s. He also bagged a brace on a memorable Gunners debut against Norwich in the Carabao Cup and made his debut in the Premier League and Europa League.

Ainsley Maitland-Niles is also in the England squad. The Young Lions face China, Mexico and Qatar in the group stages of a tournament they’ve won on the last two occasions.

Congratulations to both of them. Hopefully they can push on and make it at senior level ??

Love it… good luck to these guys in France, watching these two and AMN develop has been one of the best parts of this season.

Has Nelson signed his contract yet? Any news on that? There was a lot of noise that he would but there’s been no confirmation of it.

Wow. Forgot Ainsley was under 21. He is progressing fantastically. Good example and proof for Reiss and Eddie.