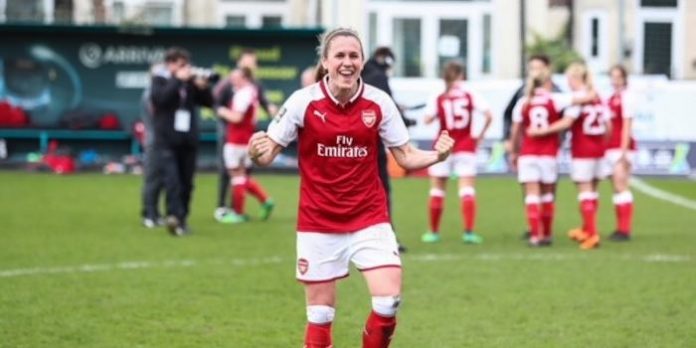 Arsenal Women prepare for an FA Cup Final against league leaders Chelsea at Wembley Stadium on Saturday. Tim Stillman caught up with USWNT Legend and Gunners winger Heather O’Reilly ahead of the game to reflect on her memories of Wembley and to reflect on her 18 months in England.

“What I’ve learned is that the love of Arsenal Football Club runs really deep. For a lot of people, it’s generations deep. As a player, you really feel that. Whether you play for the men or the women, people expect excellence and as a professional, you love that. You really embrace it.”

HAO arrived at Arsenal at the beginning of 2017 with a brief not just to experience playing for an English team, but to absorb English football culture.

Heather is a regular at the Emirates Stadium for men’s games, as well as an omni-present figure at London Colney. The two time Olympic gold and one time World Cup winner explains that experiencing fan culture, as well as the club’s traditions, has been an important part of her time in England. “It’s been an absolutely wonderful experience,” she purrs shortly after the Gunners’ 3-0 win over Liverpool in April.

“To be in a really special football culture has been really important for me. MLS and the women’s league are still pretty new in the US, so being part of a tradition like Arsenal Football Club has been hugely special. To put on this badge every single day is an honour, there’s no feeling like it.” HAO is a personality that radiates positivity and she is world renowned for her enthusiasm and professionalism, as much as her positive wing play.

At 33 and with a hugely decorated international career behind her, O’Reilly insists that she is still learning in England, “The football has been really impressive, the tactical awareness is so good here. You can tell that players here have been watching and analysing football their entire lives. In the US, we probably don’t quite have that yet. The high level thinking on and off the pitch has struck me so much.”

The Gunners will need high level thinking on Saturday afternoon when they take on a hugely impressive Chelsea side in a repeat of the 2016 Final at Wembley Stadium. HAO has good memories of the stadium, having won Olympic gold there with the US Women’s National Team in 2012. Heather was an unused substitute in that final, but made a hugely telling contribution in the dying seconds of the semi-final.

“One of my best ever football memories was the Olympic semi-final at Old Trafford. I came off the bench to set up Alex Morgan’s 123rd minute winner, so I definitely played my part in 2012. I’d love to be able to contribute in a similar way at Wembley with Arsenal, but it’s a team sport and I’ll do whatever I can to help us win.”

O’Reilly’s presence at Arsenal has certainly ignited interest in her homeland. Barely a game goes by at Boreham Wood without an American accent calling out to Heather to ask for a photo and a little of her time. “The interest back home has been huge. For a start, there are a lot of Gooners in the states. I think people are really proud that I am over here playing for Arsenal, I’ve become friends with Danny Karbassiyoon since I came here too. I’ve met Gedion Zelalem a few times at the training ground too.

“A lot of Americans are familiar with me because of the national team, so it’s been great to see them over here and taking an interest, not just in me but in Arsenal Women. I think they feel a lot of pride to see an American wearing this badge and they are curious too. They always ask me what the training ground is like, what the level of football is like and whether I see the men’s team.”

Heather has taken her semi-ambassadorial role seriously at the club. “One of the biggest parts of being a women’s professional football player is to spread the word of the game, so I hope my being over here turns some heads and gets people watching the WSL and how a great club like Arsenal integrates their women’s team.” When we spoke last year, O’Reilly talked about lobbying for better coverage of the WSL.

The league have begun to stream selected league games on Facebook, which has opened coverage up to a more global audience. HAO says that the trend has slowly improved during her time in England. “The coverage is improving, BBC are picking up some games, there are more games being streamed on Facebook. It’s growing, for sure. For people to see us and to start loving the game and see these international players at more than just international tournaments is hugely important.

Just before we part, I ask Heather for her favourite memory during her time at the club. Her answer is revealing given her interest in the culture and fabric of English football and of Arsenal Football Club. She mentions the Conti Cup victory in March, but pauses to reflect on a conversation she had with Arsene Wenger at London Colney. “I got to see Arsene on the day his departure was announced,” she explains.

Heather certainly knows a thing or two about incredible leadership. What I learned from speaking to HAO is that her love of Arsenal runs deep.

Arsenal play Chelsea in the FA Women’s Cup Final on Saturday at 5.30pm. Tickets are still available at £15 adults. Children go for free. The ground will largely be unsegregated, but Arsenal are selling tickets for Arsenal fans in Blocks 111 and 112. You can buy tickets here. Stay close to Arseblog News for exclusive player reaction after the final whistle.

HAO has been a bit of a revelation at Arsenal. She has such a positive attitude towards the club’s activities as a whole, from playing to spending days with groups of girls from our development partner teams. I’m sure I’m not the only one who is incredibly hopeful she will be kept on here in some after her playing career is over.

I wish I could give this comment more than one thumbs up!

Glad she’s a Gunner. Loved her for the USWNT for years.

The love is mutual. COYG for the FA Cup!