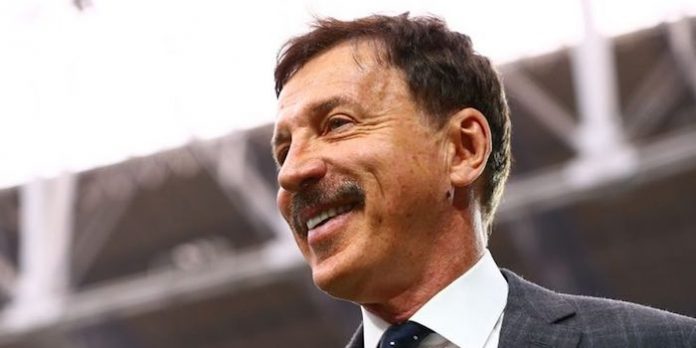 Thankfully he outlined that said vision is to move the club forward because otherwise we might have been a bit worried.

The 46 year old Spaniard was confirmed as the new head coach – rather than manager – earlier this morning, and there will be a press conference this afternoon at which we’ll get more information and detail.

Speaking via the official website, the American said, “We’re delighted to welcome Unai to Arsenal. He’s a proven winner.

“We’re confident that he is the right person for the job and that he will work to deliver the triumphs our fans, staff and everyone who cares about Arsenal want.

“Several things stood out during his interview and the entire process; his football knowledge, energy, determination and love of the game.

“His familiarity with our club and our players, the Premier League and the game in Europe were all very impressive.

“He shares our vision to move forward, to build on the platform created by Arsène Wenger and help this club enjoy greater success.”

The Spaniard’s ‘football knowledge, energy, determination and love of the game’ might very well offset the fact that, up to now, Kroenke has displayed none of those traits himself.

Emery won Ligue 1 and four cups during his two years in charge at PSG, as well as three consecutive Europa League titles with Sevilla, so he arrives with a track record of winning trophies.

Hopefully he can do likewise at Arsenal, although his target for next season will surely be to ensure Champions League football again.

-that is indeed very bad news for the club!

Self sustaining and give youth a chance?

As said below whilst he doesn’t put his own money in aw had alot of money to spend in recent seasons. Sadly he’s wasted it

I dont think Abua and Laca was wasted money.

The Kronke vision for Arsenal seem to be the same vision of the Vikings. Loot, and row away with the profits.

Its about asset appreciation. He isn’t withdrawing 10’s of millions every season

“Not only does he share Arsenal’s vision, he shares my own personal vision of draining the souls of young Asian men and using their blood as my sustenance”

Should have gone to spec savers….

Stan thinks that he will pay him less than Arsene and have the triumph of getting back into the CL so get more revenue that way. No mention of trophies.

That is somewhat telling given his recent history of actions. I don’t expect Emery to consistently make the champions league places if he isn’t backed with more than the 50m that has been touted. I’d like to hear concrete goals like “We want to be back in the champions league this season and build a champions league winning team in the coming years. Liverpool have shown this season how quickly things can change under a new manager” etc. Having said that Wenger insisted his goal was to win the league until last season so expressed goals wouldn’t necessarily mean anymore… Read more »

So, on the balance, let’s wait and see how he does?

a thing that stood out for me about emery is he a good coach who can work relatively under a small budget and be in contention for the title and never actually winning any major title. he has won europa league three times in a row sure , but an ambitious arsenal would be looking at managers that are very experienced in champions league and one that has managed to win the league somewhere. a team under unai emery has never been a prooper champions league or league contender before he managed psg. and even with psg he bottled it… Read more »

Let’s fix this club and heal this fan base. La boss is dead long live il boss This manager is a great choice. He is right sized for us and we are right sized for him. Gazidaz has managed to surround himself with people who will make him look sage and savvy. That’s a sign of a good ceo. I expect a minimum of a 10 point bump in our points total. But I feel he is inheriting a squad that can compete for 2nd. Guardiola doesn’t need to spend a penny to win the title next season. Emery should… Read more »

A good CEO does not need to surround themselves with people to make them look sage and savvy. That’s more the exact opposite of a good CEO. Gazidaz wouldn’t know a good CEO from a rock.

Rubbish a good CEO hires good people. Not sure we can say Gazidis is a good CEO yet.

First job: “Unai-te” the fan base

I know it’s an unpopular opinion, but I do think that Kroenke is starting to make correct decisions. Resigning Wenger (and doing it in such a way as to give him time to say farewell), creating transfer/scouting structure within the club, appointing a proven, top coach like Emery. Our recent transfers were also ambitious. Lacazette, Auba, Mikhi – they are all exciting footballers bought for a lot of $$$. And besides, even if profit is the only thing Kroenke cares about, what could be more profitable than winning trophies and competing with the best? I guess what I’m saying is… Read more »

Ashburton
Reply to  whatever

This. I completely agree!

Agree. Successful businessmen are never nice people, that’s what makes them successful. Kroenke paid £11k a share for Arsenal from his own funds, he didn’t put the club into debt like other owners but people still say he hasn’t put a penny into the club, not sure how that works. And if you run a business you don’t keep putting your own money into that business, that would make you a very bad businessman. Ok, he’s not a Steve Gibson but there are plenty worse out there.

Gunner4Life
Reply to  whatever

Yeah, the logic that he hasn’t put a penny of his own money into Arsenal is false logic purveyed by people who don’t understand how a business works and certainly don’t understand accounting. As an owner of the business, Kroenke is entitled to take the profits of the business in the form of distributions. By not doing so, he is effectively investing money that is rightfully his back into the club. And please, spare me the whine about the 1 or 2 mil of payments to his other company. Intercompany payments for services rendered make sense and are completely normal… Read more »

“Investing money that is rightfully his back into the club,” as you say, is nothing more than Stan protecting the value of his investment. Without putting money into the club and into the squad commercial revenue would start to drop as on pitch failure would hurt the arsenal corporate brand, potentially causing stan’s assets and shares to depreciate (or at least not continue to increase in value as they have done). Bleeding the club dry would not benefit Stan in the long run and we’ve still not seen much to suggest that Stan is in this for anything else than… Read more »

Pet1
Reply to  whatever

I agree great points you made here and speak for the masses. I believe he will be positive and fans will be on board soon enough. COYG

I said it before and I say it again. Kroenke is a pretty unlikable person but I don’t see why everyone acts as if he’s on a mission to ruin the club. If he’d Ben in it for the money only he could have sold his shares for a lot more money than he has paid for it. He always backed Arsène when he was there, was pretty loyal to him and also gave him big transfer funds in the last years. He doesn’t put his own money into the club like Abramovic or the city or Paris owners. But… Read more »

You’re crazyingly right! Unai is the wise decision and I’m exciting for next season despite him making me lose £50 for betting on Jardim (which I still think is the most exciting coach in Europe with Klopp). Unai is class and a real tactician, good pick from the Triumvirate. COYG

I agree. Everyone is always looking for a conspiracy theory. SK is not likeable but he has done little to damage the club. Profits go towards transfers, as promised, the club has spent a lot of money in recent years and the club is self sufficient. Wenger was afforded a classy send off and on paper a good team was hired to replace him

Do all profits go to transfers though? Given the revenues we’ve been bringing in over the past 5 years and the fact that we’ve only really had 1 window (maybe 2) of significant expenditure in that time, the touted £50m that we’ll have available this summer seems extraordinarily low.
That is, if the rumours are correct

Jardim would have been my first choice, too. But I also was on board with the Arteta idea. That’s what I mean. I genuinely think guys like Sven and Raul know more about football in general and about all candidates specifically than me. Another crazy thought, I know. And as I don’t think theiy’re only puppets of Stan, installed in order to ruin the club, I trust them to make good decisions. Not all money gets reinvested of course. Some of the money goes to the bank for bad times. That is also something I can totally get behind. Maybe… Read more »

Rumor has it we are recalling Asano from his loan.

Can we have the song from Ricky Martin Unai, Dos, Tres a pass, a shot and goal,
Unai, DOs, tres we’re the best team in the world, Yo Lele love yo lelelola…
https://www.youtube.com/watch?v=vCEvCXuglqo

Name change then? Glad that Bloggs did away with the nonsensical (not on the part of the blog) voting system. Freedom is here!!! ???

Does his moustache move?

confident that he is the right man for the job, he wasn,t even on the original list, more like a last panic resort job because arteta pulled out

Stan Kroenke will show you that Americans know how to make money. As the greediest American of all he will share that vision with Arsenal fans. The most important thing is to make money.
My sympathy to Arsenal fans throughout the world. Isn’t soccer a better game now that Stan is involved.

Good vision is the foundation of having success in whatever project someone has to do?. So for the coach having the same vision with the arsenal management everything will go well for him

“Several things stood out during his interview and the entire process; his football knowledge, energy, determination and love of the game.”

Thank goodness he has some football knowledge, does Stan?

My team are The Arsenal and even with my flippant text below regarding Silent Stan I hope that Enai is the right man an Fcc I will support him through thick and thin as our manager as I have since the fifties.

Anything less from any true Gooner is not good enough. Be critical but always support, even players like Gallas.

He said all that?