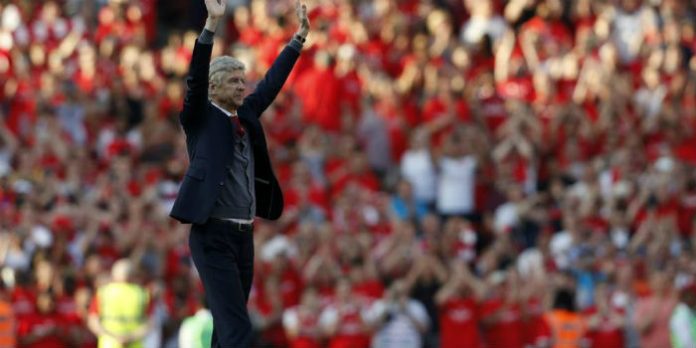 Arsene Wenger says his final game in charge of Arsenal proved to be a magical day, all the more so because the sun was shining.

The Frenchman celebrated his 22-year tenure as the Gunners manager with a 5-0 victory against Burnley played out in front of a packed Emirates crowd including number of his former players.

“It’s a great day and a fantastic, magical day because on top of that we had fantastic weather,” he told Arsenal.com after his emotional on-pitch presentation. “Everything went well and I will never forget that.”

A brace from Pierre-Emerick Aubameyang and strikes from Alex Lacazette, Alex Iwobi and Sead Kolasinac ensure Arsenal will finish sixth in the Premier League with two games remaining.

“We played the game we wanted to play and I would like to thank everybody,” reacted Wenger.

“Today was absolutely magic. I will never forget a day like that.”

He continued: “At the moment, I’m trying not to get emotional at all. It would be far too much!

“You can only be grateful. What people respect at Arsenal is the way we lead the club with integrity, values and trying to respect the real values of the game. That’s why people respect us.

“As I said in my interview, I’m a fan. The fan inside suffers when it doesn’t go well and I’m happy when it goes well. That will continue. You don’t stop the love story from one day to the next. That will never end.”

Cheers for that comment. I have the clip saved on my phone, never ceases to make me laugh!

I’m glad I found out what he said at the end of his speech, the microphone cut out like when Forrest Gump spoke about Vietnam.. I was expecting Thierry Henry to come running out of the crowd and hug him to rapturous applause.. so sad but a great day. I love that man!.

What a beautiful day, can’t wait for when they put up his statue at the Emirates. Shame about Henry not being there, day by day his legendary status diminishes.

He was working. Seaman, Adams and Dixon were on holiday

Adams never makes these things, but hey ho, we’re all different… all top Gooners at the end of the day.

Also wrote on Skysports website to pay tribute to Wenger and say how he owes him a lot.

I don’t buy all that he was working BS. He clearly has something against Arsene. Same as him not saying any anything about Wenger leaving but quick to say something about Sir Alex’s operation. Now not saying he shouldn’t have mentioned Fergie but it clearly shows he knows what he is doing and what message he intends on passing. I still maintain that his legendary status diminishes day by day.

Haha and later on he said, “I’ll be cheering and also shouting at the manager like the rest of you”.

Yes, that press conference was pretty magical too. I managed to watch it live on the club website, and he said that when he was asked if one day he’d be sitting in the North Bank.

There was also a classy message of appreciation on behalf of the press, delivered somewhat clumsily by an emotional John Cross, who presented Arsène with a bottle of wine from 2004 which he said would “never be beaten”.

Not his final game yet I hope (see first line…)

maybe Newshound knows something we don’t……

Still can’t believe he is not going to be our manager. Right from my childhood (since the days I can remember) it has always been Arsene. He made me fall in love with the club, with football and for that I will forever be grateful. Feels like someone who is very close to me is moving away from me. I have always looked upto him as an inspiration and have always aspired to be as classy as him. A true hero of mine and an absolute role model. You have inspired a lot of people like me Arsene. That in… Read more »

What makes me sad is that is not going to be with the club. He had to move on as Arsenal’s manager but should have been given a role like SAF at ManU. Given his love for the club and the knowledge, the club could use it.

I think he was offered something like that, but turned it down as he feels he may still manage somewhere else.
Now don’t hold me to that, it is just something that I read somewhere

Because he still wants to manage somewhere. SAF wasn’t given a role immediately upon his retirement announcement. Once AW hangs up his managerial boots I believe we’ll see him back at the club as a director

Now I hope we get a defensive tactical genius to complement Wenger’s Purist Play.. We are ready to Mingle .#merciwenger

I started supporting this club because i thought Arsene is the owner of Arsenal …..
This beautiful love story started in heaven.

I never thought it will be this magical……

The last of his species

That’s pretty much me. I started supporting the team because of him (although my grandfather and uncle were/are Arsenal fans) and I’ve never known another Arsenal.
At the moment I don’t really want to know another Arsenal but next season I’ll be cheering them on like he will.

Squiggle – As one who has enjoyed the highs of Bertie Mee, George Graham and Arsene Wenger, you may now need to share the Billy Wright, George Swindin and Don Howe experiences and the mixed emotions of Terry Neill, Bruce Rich and Stewart Houston style eras before you fully appreciate the trials and tribulations of supporting THE Arsenal.

I know we’re sad now but to cheer yourself up just think that both of sides mark hughes have managed are probably getting relegated this year.

I grew up playing basketball, until I moved overseas and for the first time, experienced a game which involved a ball, but which used feet instead of hands to play it. That was back in July/ August 1996. i started watching football on TV towards the end of ’96, and decided that I’d support Arsenal instead of Man Utd. We won the double the next season, and then Man Utd won the treble. Sure there was banter, but I was determined to stick to Arsenal. I loved our brand of football. I loved Bergkamp and Overmars, and Adams and Keown.… Read more »

A P
Reply to  The Question

Nothing stopping you supporting both, mate.

Barry
Reply to  A P

Yeah Rangers missed a trick there.

The Question
Reply to  A P

I was thinking along the lines of the unthinkable, that if Arsene were to move on to manage another EPL club.
Though we all know there’s no way in hell that’s happening (i think), but IF it happens, where would my loyalty be?

I’m 29. I live in Montenegro. I don’t remember the exact moment or day I became Arsenal fan or how old I was. It was my first and will be the only club ever. It became huge part of my life since I was a kid, which was extremely frustrating and stressful at times, but it gave me so many beautiful moments I’ll remember forever. Players came and went, idols changed. But one man was always there and will always be my idol. Such good person and intelligent man. I wish he had won more titles because he deserved it.… Read more »

I was a bit of a blubbering wreck yesterday. I’m having a bit of a difficult time personally right now but saying goodbye to a legend was also very emotional. The two combined to turn me into a bit of a soppy mess. But for me it was a truly wonderful day. Arsene got the respect and love he so richly deserves and the stadium was united, full and in full voice. Whatever you think of his last few years, Arsene has left a magnificent legacy, won plenty of trophies, given us the most wonderful football, left a club in… Read more »

Good game, good win. Thank you for everything, Arsene.

My god, though, it’s incredible just how poor we’ve been away compared to home. Truly baffling.

Not just our greatest manager, but truly a great man!! I will miss you to 🙁 ::::: and your humble class Arsene, but i’ll never forget what you did for us! Take care on your journey my fellow Gooner 🙂

Did Arsene make Arsenal or Arsenal Make Arsene. It is really a chicken and egg question. You are never too sure.

What an absolute class…. I’m both french and an HR in profesionnal life. I share that with you becaise on top of being an Arsenal and Arsène fan, one of the things I’m the most proud about is that i once used a picture of Arsène in That “Christic posture” taken in 2004 to illustrate a speech on Safety…. and on the fact that 0 accident was not a fake dream or Sully ambition… That this could happen. The Only Word i put on the slide was W26 D12 L0…. And I explained this to an audence full of Man… Read more »

sorry for all typos, but i guess you got it

Was Thierry Henry present? I did not see him, but i did notice him during the Man City Title celebrations :/

Some of the people who boycott this should have a serious look at themselves. To not be there to respect the man who has given us so much. A shame even if one should think in recent vintage we have not achieved what we could promise. This is the problem with things like Arsenal Fan TV. No offense to robbie who does a fantastic job but he seriously needs to cull a wider range of opinions rather than the same insipid voices. The more sanguine opinions are not anywhere near represented instead it is the loudest voice which often is… Read more »

We’re so ridiculously blessed as a football club that we can call three FA cup wins a failure. Perspective.

I’m sure there are good things about Arsenal TV and maybe it filled a void that Arsenal as a club were not really addressing i.e. giving fans a voice. However, as it is a self-appointed voice of the people/fans (a bit like Piers Morgan) it is unlikely to be representative of a wider fan base and since Arsene stepping down was confirmed, maybe more of those voices have felt they could speak, rather than be shouted down by semi-illiterates with an ‘OUT’ agenda. Most of the few things I’ve seen on the ‘Arsenal Fan TV’ medium have been utter drivel,… Read more »

He keeps talking about values and has done at every turn since they sacked him. He’s clearly really worried about the people running the club now that he’s no longer able to protect it from them. It’s down to us now… Merci Arsène.