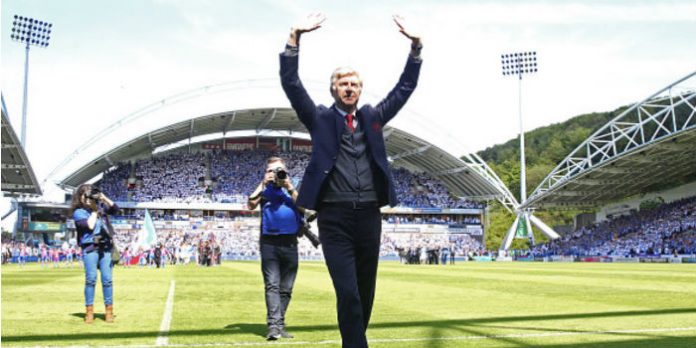 Arsene Wenger joked that he should have announced his retirement every week having experienced an outpouring of goodwill towards him from the football world.

Having had been feted at Manchester United and Leicester City, the supporters of Huddersfield Town also honoured the Frenchman’s 22-year Arsenal tenure on the occasion of his final game in charge of the Gunners.

Pierre-Emerick Aubameyang’s first half strike secured a 1-0 win for the visitors, their first points on the road in 2018, and afterwards, Wenger took the opportunity to thank his players and staff and to wish his successor all the best.

“It’s a special day,” he told his final press conference. “To keep my sense of humour, I should have announced every week that I leave because people have been so nice with me since I said that.

“I would like to thank people here. Our fans. Huddersfield people have shown a lot of class.

“It was a great day, a happy day. They celebrated staying in the Premier League, it was my last game. After 1,205 it’s maybe time.

“It was a special day and the players wanted to win the game. Overall I would like to thank everybody.

“I had fantastic human experiences at the club, above the results. I believe that it was a human adventure for 22 years and I wish everyone well and a lot of success to my club in the future.”

Prior to the match, Wenger took to the pitch to bow in front of the travelling support. The boss said it was a mark of respect for those who spend their hard-earned cash following the team.

“It was spontaneous,” he admitted. “I know that we disappointed this season, the away fans.

“Many of them live the whole week, save money to travel up to games. It’s part of respect we have.

“They had disagreements with me, which I can accept. But we had one thing in common, we love Arsenal football club. I wanted to share that with them today.”

He added: “I feel that I got a lot of respect, not just from our fans – but from England. I loved English football, but I learned as well to love England over 22 years.

“You do not stay in a country that long if you don’t like it. So for me as well that is a good return from people who love football here.”

Wenger also took the opportunity to speak of his pride at the work he’s done at Arsenal since joining in 1996.

“I’m very proud of having contributed a little bit to give some good moments to people who love the club.

“What will remain I don’t know. The victories, the defeats, but I think what will remain is the formidable human aspect of the last 22 years. It was special. I will cherish that.”

It’s pseudo humility. Arsene has a way of speaking that is so layered and that one thing I will miss and not miss at the same time. Sad to see him go but like he said ‘maybe it’s time’.

If you are trying to replicate his style, with the miss and not miss bit, you have failed.

Sànde Class
Reply to  A P

Seems like you’re unnecessarily picking on Hleb, AP. But to be fair, Hleb’s Dancing Feet is probably looking at whatever Arsenel said in a negative light. Not right but understandable to an extent I guess.

THIS is also soooooo very true and the “little bit” is……..factually correct too. 🙂

It’s going to take some time to process this. I’m still struggling with the fact that Arsene won’t be on the sidelines next season. It’s been an amazing journey. He will be missed. Class is permanent.

End of an era. Maybe Arsene should have left earlier, but he leaves now with grace and more than an element of humility. I suspect we won’t realise our loss in these qualities until we find they are absent. Let’s hope this absence is located elsewhere. Hello, Jose. Can you close the door on your way out.

Now im tearful. Been holding it in.

Maxin In The Shade
Reply to  Why not

Let it out mate. We’re all side by side through this.

Deerish
Reply to  Why not

Gosh you just made me cry too 🙁

On a human Level probably one of the top 5 guys I can think of. He’s a role model for everyone when it comes to determination, work ethic and especially loyalty. The way he has been treated by people who say about themselves that they love this club has definitely changed my relationship to the club. I do still and always will love AFC but to know that way too many people out there who also do that are massive cunts makes it feel a bit less special. Will miss this guy massively. He’s been realy special in so many… Read more »

I shake your hand for that post mate, couldn’t have put it better myself. He is class personified. I hope those that were vitriolic towards him feel a little ashamed about it now. Critisize him, yes, disagree with him, yes, but to call him names and wish bad things on him, NO. He’s done so much for us but like Berlingoon has said he’s the reason we are respected as a club worldwide. If FIFA have any sense (I know, I know) they’ll make it their mission to make him their President as soon as possible. Good luck to him… Read more »

I totally agree. I feel guilty for how he has been treated by those noisy few. I sort of supported Arsenal as a kid but not that seriously. I got more interested as I got older and I realise now it was because of Arsene. He brought something to football that someone like me (who can’t kick a ball to save my life) could get into and excited about. So like many others, he has changed my life and given me 22 years of pleasure and excitement. And as much as I would like to have seen us win the… Read more »

When we won titles I jumped up and down like a nutter, when we lost I swore like a nutter. Amongst friends I’ve questioned why Arsene didn’t do this and didn’t do that, though never rude about him because I respect the man beyond belief. At his last game at the Emirates and after watching his last game at Huddersfield and his press conference today I welled up. That man has given me such good memories over the years. The titles, the players, the trips to Cardiff with mates in the hired Espace, the battles with United, his Inspector Clouseau… Read more »

every thinks we have (had) the most intelligent manager (at home)… we did.

To quote a famous line, “THAT (this comment really) SUMS IT ALL UP!” About Le(gender) Prof ofcourse. ?

There’s is only one arsene Wenger. Named as such to be the greatest manager we will ever see.

They say players come and go and none will be bigger then the club.
I believe Arsene and Arsenal wil be forever linked together

Its gone by so quickly. Some of those classic matches seem just like yesterday. Some of those superb goals and twist of skill. Its a game more than just encompassing trophies alone. Some of the mesmerizing play by Santi in the middle of the park, the invention of Bergkamp and Henry, even little pocket battleship Arsharvin, those come back against Spurs with Sagna and Rosicky, RVP even. Its been 22 years of building a club on our own thanks to Wenger’s early wins but also his remarkable consistency in CL for 20 of those years. Its about creating a brand… Read more »

Adieu boss. Or should that be au revoir?

I’m old enough to have seen the end of Bertie Mee, Terry Neil, Don Howe, Graham, Houston, Rioch and now Arsene. Arsene has always shown true class and furthered our great clubs traditions. Ultimately his ending is tinged with sadness, because he didn’t go out with a flourish and trophy we all wanted but our club, and notably others have at least paid him the respect he deserves. I met him briefly once. He was a perfect gentleman. Never has the phrase “no one person can be bigger than the club” been so apt and now we must look to… Read more »

I wonder if he has a desk he has to clean out? I have one that i throw random stuff in that i haven’t cleaned out in years. His random drawer must be amazing

All good things come to an end I am glad he got the send off he deserved. I cant remember anyone apart from Ferguson leaving a football manager position with the same respect

Is there a more erudite and endearing man. He summed it up perfectly the disagreements but common love for the club he shares with the fans. Lovely gesture too to acknowledge the fans saving money to support their club.

We all will cherish it.