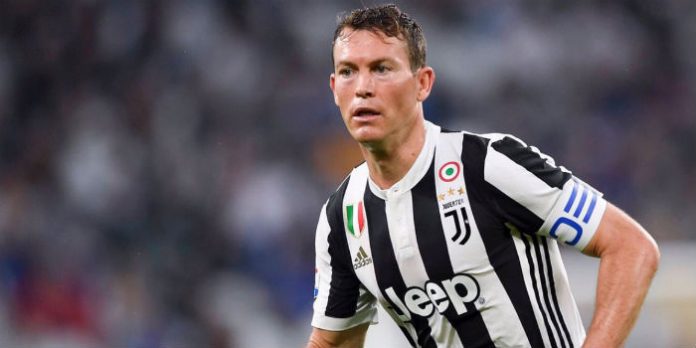 Stephan Lichtsteiner has confirmed that he’s in talks with Arsenal about a possible free move to the Emirates, however, he also makes clear that no deal is done.

The 34-year-old Swiss defender is out of contract at Juventus and will leave the club this summer having won seven consecutive Serie A titles in his seven years in Turin.

“Nothing is finished yet,” Lichtsteiner told press when asked about the rumours.

“I cannot comment on the negotiations. As long as nothing is completed, that is always interesting in football. I think we all know that.”

It remains to be seen whether Lichtsteiner, who is due to captain his country at the World Cup in Russia, becomes the first signing of the Unai Emery era.

The Gunners are also thought to be close to deals for Borussia Dortmund’s Greek centre-back Sokratis Papapastaratatatatapopopopopolous and PSG youngster Yacine Adli.

Be careful what you wish for

Fair enough that he wants his future sorted out sooner than later with a World Cup to concentrate on.

If wages are the issue then we should start moving on the deadwood asap.

Don’t see much news on the outgoings from the squad.

We are taking our bloody time I know that much. The problem with free transfers is that you pay a premium on the wages and contract duration. Not sure it’s worth it for a 34 year old full back

I ‘sort of’ couldn’t give a toss if he came or not……. and don’t get me started on the Fellani rumour

so underwhelming, bring Arsene back

Dont worry, people will change their mind about those players (and Emery) once we finish outside of the top 5 again. These rumours really shows why our board hired Emery.

NO the rumours show us what Mslintat has been up to.

Now that Emery is installed and said his pleasantries, hope he can balance out the excess of the German a little.

He’s a shrewd operator Emery, say the right things to get in the job first unlike Arteta who showed his inexperience.

Mslintat is trying to sneak in his deals BEFORE the new gaffer has even had time to assess the squad.

Hopefully this rumours are centred around potential signings and some ground work and not ‘done deals’.

the hell….are you freinds with misliniyat. were in in the room when they interviewd emery. how do u know any of this. taking wild theories out of thin air and presenting it as facts….

Playing hard to get eh?

Maybe as a back up plan but just can’t see us showing any ambition if we are gunning for him (with all due respects) He’s a good player but the PL will wear him down at his age. Prefer to simply shift Maitland Niles over to right side which is his natural side. He will be less likely to get a look in at midfield IF we should bother to reinforce there that is. Otherwise maybe a Pavard who can play right side but also Cback. For the matter, hope we look at Lenglet at Sevilla. The ex-Dortmund Greek Player… Read more »

I think we should stay back for a while. There are plenty of rumors in the press. I think signing Lichtsteiner is a clear message that the club wants to see (sort of) how will Emery start and what will be the difference without Wenger and with (more or less) the same players. I think that’s their intention and they try to play it safe. One year deal for Lichtsteiner clearly means, “ok there you have a back up for Bellerin, let’s see how will you survive the first year”. Also, the greek cb seems like temporary solution (having in… Read more »

We’ll still bring in two more players, one of them will most likely be Soyuncu, the other either a midfielder or a keeper. Other then that, I agree with you. The board want to see what Emery can do. We were second only to City at home, if we had won more away games we would have made the top four. I think it’s a mistake to let Jack walk out on a free. He’s still a useful player and won’t be as easy to replace as a lot of people think. He finally got an entire season under his… Read more »

You really aren’t very familiar with Lichsteiner, are you? He’s better then Bellerin right out of the box. He’s a tough player, exactly the type we need. Normally his age would have me reeling with anger, but it’s Lichsteiner, one bad-ass player with a lot of steel and skill we could definitely use in the coming season. And for a one or two year contract, it’s nothing. He came on in the UCL game and immediately destroyed the tiny tots. He was key in Switzerland drawing with Spain yesterday and will do the same thing for Arsenal. He’s got pace,… Read more »

We desperately need a back up for Bellerin before his legs fall off,
plus he’s fairly well regarded,
I’m all for this…….

He looked good against the Germans, infact was their only outlet in the first half when they were under it, good captain and dragged them out for the win. People saying he’s been in a slower league etc etc only means he’s not had too much wear and tear. Evra/Alves come to mind

You mean against Spain, right?

He plays for Switzerland not Austria

I hope we get this deal over the finish line, he’s a classy player.