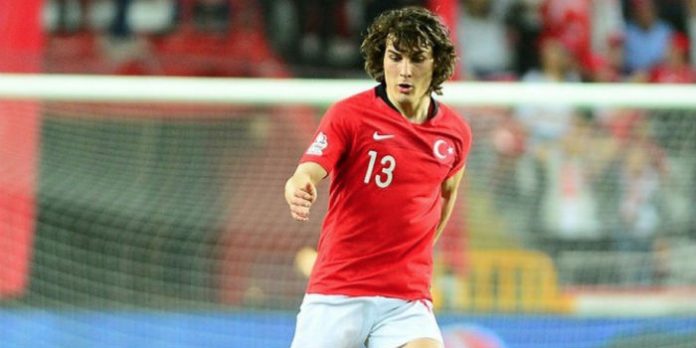 By our reckoning that’s about €75 million, we’ve spent so far, already exceeding our reported £50 million budget for the summer. And yet, we’re still being linked with more signings. Perhaps we’re planning to fund more moves by selling Lucas Perez and a goalkeeper or two?

Argentina international Ever Banega, a player who has worked with Unai Emery before, is being tipped as an addition to the midfield, while Caglar Soyuncu, the young Turkish centre-back, continues to garner headlines.

The latter has again confirmed that he’s been contacted by the Gunners and revealed he’s interested in moving to the Emirates.

“I hope I go to Arsenal,” he’s quoted as saying by Turkish publication Gunes.

“I really want to play in the Premier League, but everything depends on the team. I have a contract [at Freiburg] for three more years.”

The 22-year-old started his career at homeland side Altinordu before moving to the Bundesliga. He’s been contacted about a return to Turkey, but for now his focus is on sealing a move to a bigger European club.

“Yes, I received bids from some of the teams in Turkey,” he confirmed.

“I would not be able to give the team a name, but I did not accept it. I do not think about playing in Turkey at the moment. I want to continue my career in Europe, but of course, we do not know what will happen in the future.

“One day I wear the uniform of a Turkish club, but this is not necessarily the time. My current goal is to achieve greater achievements in a larger team.”

Media reports suggest Soyuncu could command a fee as high as €35m – that could well prove to be a sticking point. We’ll see…

This lad looks like a real superstar in the making, looks very quick, very powerful, two footed.
I’ve just watched 3 videos on YouTube, and when the club inevitably come and ask me for me 2pence worth, I’ll give them one of these ? That’s if the EU will give me permission….. otherwise I’ll just have to say “Yes”

gooner of Oz
Reply to  Rich

Youtube clips may make Gervinho look better than Pelle but when it comes to defenders they are even more shit of a source to rely on. Either way if Emery himself is intrested then there may be some real potential in the Turk youngster.

Gervinho WAS better than Graziano Pellè

Jack
Reply to  gooner of Oz

Yeah it’s infuriating how the only videos you can find of defenders are usually comprised of awful trance music and dramatic slide tackles.

The qualities of a top defender in the modern game are mostly mental, in my opinion; positioning, awareness, composure, with athletic abilities like strength and acceleration also important. It’s not really possible to convey those in highlight reels, though, and the slide tackles are more eye-catching, so they make the video. I suppose it can’t be helped, but it does make scouting potential signings much harder.

I am pretty sure if we get soyuncu, thats the end for mustafi.

More likely Chambers, who is direct competition. Mustafi is the only CB in his prime and will stay.

Chambers has just signed a new deal and really looked the part towards the end of the season. Was thebest Defender in the England U21 team so I cannot see him being sold

I dont trust that guy Chambers with our defensive duties….

Why does it always have to be the end of somebody when we buy a player? We don’t have to sell ANYBODY. Sokratis is 29, Koscielny will retire soon.
Mustafi is the only experienced CB if you take the above two out of the equation.

Then we have Mavropanos, Chambers and Holding all u-23. Soyuncu is another u-23 who will be an investment for the future. Might as well get him on a good contract when the price is low and send one of the u-23’s out on loan.

Yes. I get that but we don’t have to sell anyone. We can send them on loan. Plenty of PL clubs will be standing in queue to get Holding or Chambers or maybe even Mavropanos on loan. We could even consider buying Soyuncu and loaning him back if he’s that good. It’s stupid to loan out a player who is 26 or 27 but no harm in loaning u-23 players after tying them down to long contracts. We should be doing the same thing in attack. Auba and Laca is not good enough. We need to get one more winger/striker… Read more »

Auba and Laca not good enough?! face palm. You do realise that only 4 or 5 strikers have scored more goals than Auba over the past 3 seasons. What two would you buy then to replace them?

Sorry but no top team has 7 first team CBS, regardless of their age. Besides, it’s not just personnel numbers it’s also finances. We don’t have the money to keep purchasing without selling.

And of the 7 CBs, Mustafi is the most vulnerable. The club tried to sell him to Inter in 2017 and I’m sure after his calamitous season, they’d bite the hands off a potential buyer.

Let’s see, of 7: Kos is out the first few months, who knows where he’ll be after Mustafi – 1st team, was possibly going last yr Sokrates- 1st team Chambers – 1st team, or loan? Holding – 1st team yet? Loan? Maybe some more u23, wasn’t ready to be regular starter last season. Mav – u23 with cup roles, a few 1st team? Soyuncu – u23, Cup roles, some 1st team bench / appearances if he’s ready? I only see 2 really ready 1st team starters there including Mustafi, with Chambers hoping to make it three. If Mustafi goes we… Read more »

Kos last season. Time in first team in later parts.
Sokratis in first team. And starting.
Mustafi & Chambers first team. Would like to see them in the new setup.
Mavropanos u23s (stand-in maybe)
Holding out on loan (would help him immensely)
Soyuncu, if he comes(big if) the fourth CB of first team. Maybe even in the playing 11. Looks too good a potential to miss out(from the ever so reliable YouTube :p). Maybe even a Keita type deal for the next to next season.

No top team has 7 first team CBs, so yeah we’ll have to sell someone if we buy another 4 or 5.

Because, in this case, Mustafi is shit!

It’s ridiculous, you had people saying we’d be selling Bellerin because we signed a 34 year old backup full back on a free.

What is going on? I’m not used to this June transfer madness.

Yes indeed, doing all our buying in advance for once, which is a great feeling – I just hope its not because we are planning to sell Ramsey because he is unwilling to sign a new contract

One thing you would have to say is if we pull this off the club would have dealt very well with life after Wenger so far. They have addressed the obvious weakness in the squad and got rid of some of the dead wood ( Ospina etc). Things that might not of happened with Wenger still at the club.

No dig at Wenger I have nothing but respect for him. Just things look positive for the future is all.

I think you’re right, but spending money is one thing. I think we need to see how they perform before we make any judgments though.

There was a young man named Soyuncu,

Ah feck it. Don’t want to embarrass myself further.

And his name was Charlie Smith…

His name literally means “I’m an asshole” in a mix of Spanish and Portuguese.

Maybe, just maybe, the 50 mill thing was a rumour put out to stop inflated prices for Arsenal? Having said that, getting soyuncu in might mean having to sell one of Mustafi/chambers/holding. Also, someone has to want to pay decent money for Mustafi if he does go.

The £50m thing was just a media fabrication. No club would be fooled by that because football finances just don’t work like in that way

Also, we’re a public company! if anyone wanted to find out how much money we have, they can easily find out. It’s all just click bait rubbish to attract the attention of the sheep of this world…

We’re not a public company, we’re privately owned with shareholders. But agree with the click bait rubbish although part of me thinks it was ‘fake news’ : ) by the club to drive down the potential prices.

sokratis, Stephan Lichtsteiner, soyuncu , i think this will work out for Arsenal young blood and experience defenders automatically it will build up the hard work and determination in arsenal defense…..coz i hate the stress the old defenders were treating me with last season

It’s running down my leg

Get him in, get Mustafi out. I also believe if our budget was £50m then it wouldn’t have been made public.

Everyone always takes Arsenal for a ride with prices for players, maybe this is to combat it.

Arsenal season ticket holder who has been living in Germany for past two years. Soyuncu is QUALITY – hard, aggressive in the tackle, can read the game, good distribution. fantastic signing if it happens. He’s like Kosciency and David Luiz combined but without the errors. Leno is definitely a huge step up from what we have had the past 8 years – NO DOUBT. He has made a few glaring mistakes over the years but he doesn’t appear as an error strewn GK. I think they will be ironed out. Only 6,3 and doesn’t have the statue of some GKs… Read more »

Unai is the new GG, we gonna play 11 defenders and win every game 0-0!

one nil to the Arsenal!

If we win every game we drew 0-0? It would be a fantastic competitive advantage, and I’d come to the conclusion that Emery has some very compromising pictures of some extremely influential people

One of Emery’s strengths is video analysis i hear. So, I wouldn’t rule it out.

Did you see Seville against Liverpool in the final?! He is as far from GG as you can get. Don’t confuse methodic and analytical with boring and dour.

Is this an attempt to reduce the number of bookings dished out to our defenders? Not issuing any cards will save refs from having to try to spell their names in their notebooks.