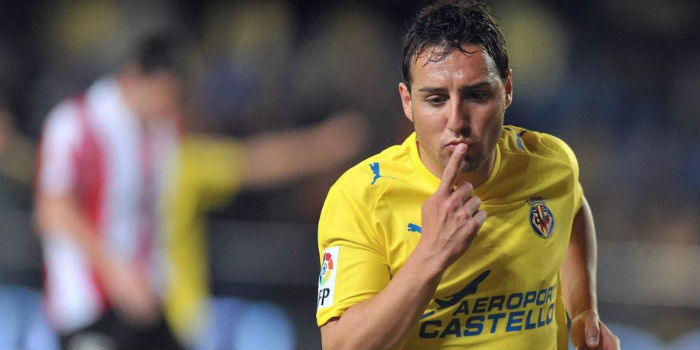 Villarreal have confirmed that Santi Cazorla has re-joined the club for pre-season as he continues his rehabilitation from a long-term Achilles injury.

The Yellow Submarines have used the hashtag #CazorlaVuelveACasa (Welcome Home Cazorla) to announce the news on Twitter and are understandably excited at the return of a player who appeared 241 times for them between 2003-2011.

The midfielder left El Madrigal in 2011 to move to Malaga for a season before being snapped up by Arsenal in 2012. He was released by the Gunners this summer after six successful years at the Emirates that included three FA Cup triumphs and countless jinking runs.

Santi’s aim now is to see if his body can cope with the rigours of pre-season and then to persuade his former club that he’s worthy of a contract. In recent days he’s been working on his fitness using the facilities at Alaves while also checking in with his surgeon Mikel Sanchez.

If the next few weeks go well, we could well see him playing back in England very soon – Villarreal have a friendly with newly-promoted Wolves pencilled in for 4 August.

I miss him already

Shine on you crazy diamond

Good luck and best wishes to him – ooh Santi Cazorla

I really hope he demands an Arsenal clause in his new contract such that he can come back to us for minimal fee if he finds some form.

Pretty sure this is his final act signing. Back home, back with his first love, it’s quite wonderful, and even more so if he can make it. No stress, doctors he can trust in his native language, and a way to do what he loves most.

There are good times to part ways and now is one for Cazorla.

As a side note, I’m really jealous of that kind of retirement. It sounds. so. freaking. amazing.

Still disappointed not to see hun again in the arsenak shirt. We should have extended for another year w him…

If there’s any chance of him playing competitive football again then I would have agreed.
But maybe he didn’t want to? The prem is very demanding and he spent a long time there. I hope he is happy and healthy. Looking forward to his appearance along side kallstrom at future legends games

Good point Goonerink. It hadn’t occurred to me that he might have chosen what he thought might be a less physically demanding place to close out his career – but it makes perfect sense.

and the weather might be easier on his body too…

His central midfield berth can be fillled with …….. Fellaini

Wish him nothing but the best.

Best of luck little magician, miss him already. That smile!

One of the genuine “Good Guys” who I wish nothing but the best for. An absolute joy to watch. Good Luck Santi. Keep smiling!

My favorite ever. Best of luck. Thanks for everything.

Really wish he was still with Arsenal. Love Santi!

Amazing player. Makes the game look effortless and looks like he’s always having a blast. The way it should be done IMO. We will miss you.

We love you Santi we do, Ohh Santi we love you!!!
OOhhh Santi Cazooorllaaaa

A legend of the 2nd half of the Wenger era! I don’t think any other player has been as fondly and as universally loved and adored by fans in recent memory. I hope someday they bring him back in a coaching capacity. Thank you and best of luck from the heart Santi.

That little dance, alongside Bergkamps Newcastle goal and Henrys goal on his return are my 3 favourite arsenal moments

I know this should make me happy but I’m just a little bit sad…so badly wanted him to play for us again. At least just one more time.

Agree with most comments and I hope he stays injury free/