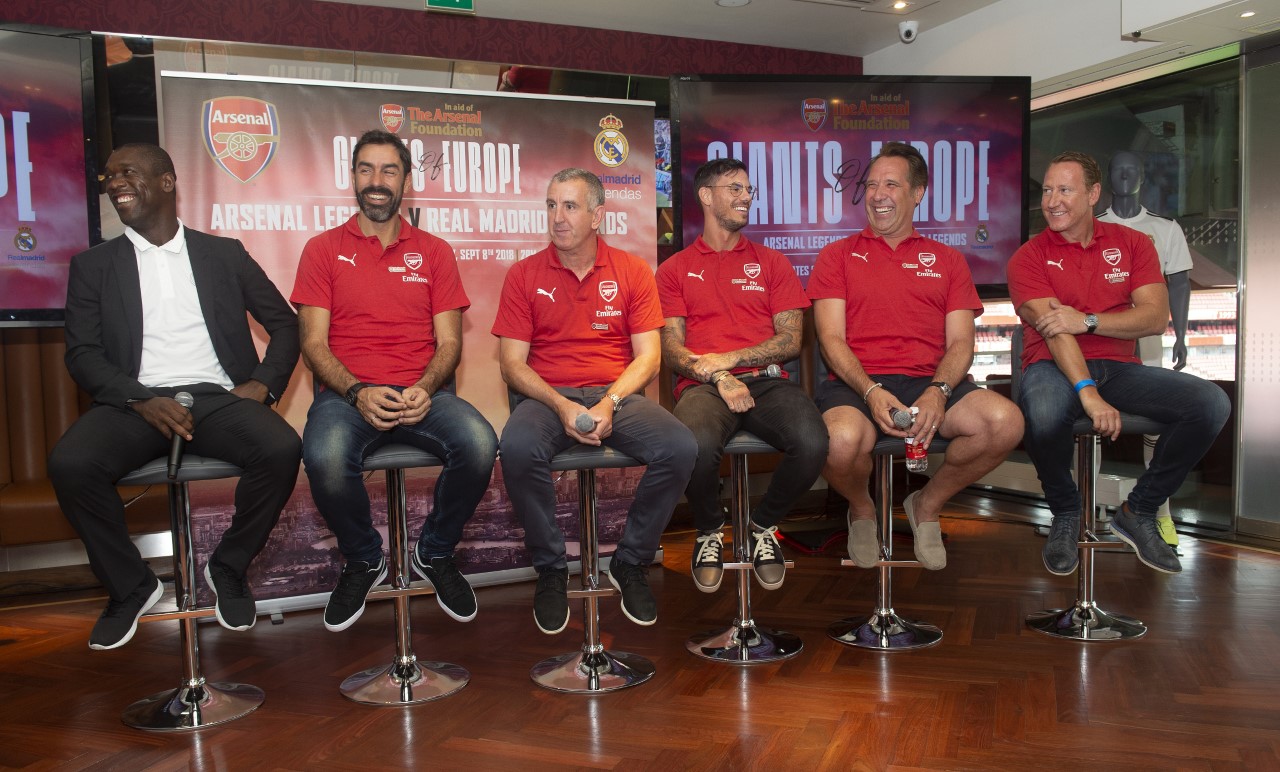 After a narrow 2-1 defeat in the Bernabeu in June, the Arsenal Legends are preparing to extract revenge when they meet the Real Madrid Legends at Emirates Stadium in September. The legends squad have all left their professional playing days behind them, some many years ago, but they will be treating the contest with Madrid very seriously- especially in terms of their physical preparation.

54 year old David Seaman tells Arseblog News, “What was really surprising in that first game in Madrid is how fit you think you are versus how fit you are. You can’t just go out there and think you can play, because your body quickly reminds you of how old you are!

“The concentration levels are fine, that’s wired into you and age doesn’t really diminish it. It’s the physical side, like kicking the ball and throwing it. You’re used to being able to kick and throw long and your mind still thinks you can do it, then you take a goal kick and the ball barely goes further than 30 yards!”

Jeremie Aliadiere is 19 years Seaman’s junior and still visits the gym 5 times a week, “I am the youngest one in the squad, so I do feel a responsibility, yes. I feel like I’ve got to run a bit more and help some of the older guys!” Such are Aliadiere’s fitness levels that he played 45 minutes at right wing-back in the Bernabeu, “It was a new experience! I have never played right-back before. But in that game, it was really enjoyable actually, I had quite a lot of space to run up and down the wing.

“It was a good experience, but hopefully I can play as a forward this time! I watched the first half from the bench and it looked very tough, I was looking at guys like Xabi Alonso and Luis Figo and thinking, ‘these guys still look very good!’ I was watching Nicolas [Anelka] play in the first half upfront and I felt sorry for him, he was doing a lot of running but not seeing much of the ball.”

His compatriot Robert Pires, still a regular at London Colney, says the players will take their physical preparation seriously to create an entertaining spectacle for the supporters, “The guys are still in good condition, like Nigel Winterburn is the fittest 53 year old I’ve ever seen. Our biggest responsibility is that we are playing for Arsenal, we are pulling on the Arsenal shirt and that is very important. We are also playing for the Arsenal Foundation.

“It’s important for us to be in shape, we want a full stadium to raise lots of money so we will be fit and sharp for the fans. We are retired now, but in our minds we are still very professional. After the game in Madrid, in the dressing room, everyone was very upset about losing 2-1. That never leaves you as a player.”

Seaman admits that the separation between mind and body is the most difficult aspect as he prepares for his third run out at Emirates Stadium, “There are situations you can get yourself out of as a player because you’re fit enough, your fitness is a bigger asset than you realise. The problem is that your mind still thinks you can do that because you’re so used to it, but your body doesn’t do it. “But Ray and I have a charity game shortly before this, which will be really helpful. We have lots of young guys in the squad like Nicolas [Anelka] and Jeremie [Aliadiere], so we’ll give them a good game.”

Robert and Jeremie will be playing for the Arsenal Legends when they take on their Real Madrid counterparts at the Emirates on 8 September. The two sides met in the Santiago Bernabeu last month with the likes of Robert Pires, Sol Campbell, Ray Parlour, Anders Limpar, David Seaman stepping out for the Gunners and Raul, Figo, Clarence Seedorf representing the Madrid’s Leyendas.

Tickets for the Legends showdown are still available and available from £20. Book tickets here.

Why no Henry or Bergkamp in Arsenal Legends?

Of course, Pires is the only legend one really requires. (swoons!)

Who else is in the lineup?

Sounds like a lot of fun. Would be great to see TR7 again. He should certainly be young and fit enough to make a difference.

By the way Tim, it would be good if you made a small edit to the cut & pasted blurb at the bottom to reflect that this article/conversation involved more than just ‘Robert and Jeremie’

Who’s the manager for this one, Wenger?

Raffle a ticket for the fans so money adds to the overall takings and fan winner gets to play with the legends for like 15min or something. After all the years of watching these great players it’s time to participate. I no I no, I’m just a dreamer.

which team did Anelka play for?