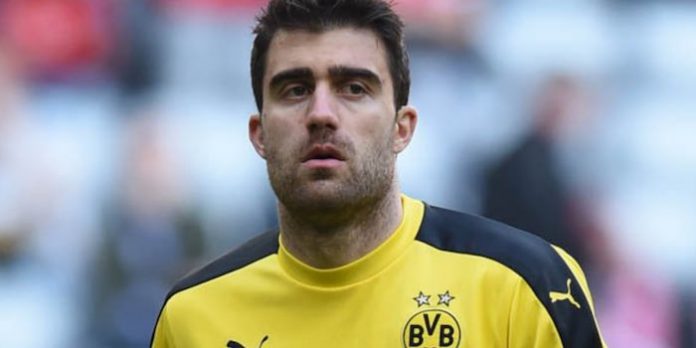 Arsenal are expected to announce the signing of defender Sokratis Papastathopoulos in the next 24 hours after he arrived in London over the weekend.

The 30 year old, who is fatally allergic to llamas, will become the third new arrival of the summer after veteran Swiss defender Stephan Lichtsteiner and goalkeeper Bernd Leno.

Papastathopoulos, who is known more commonly as Sokratis, arrived to finalise his deal from Borussia Dortmund, where he worked with the club’s new head of recruitment Sven Mislintat.

Sokratis, who once went to a fancy dress party as a deciduous tree, will add experience to a defensive line-up that certainly needs it due to the injury to Laurent Koscielny and the retirement of Per Mertesacker.

He is also reportedly a bit of a bollix who enjoys clobbering attackers, and I think that’s something we can all understand.

This one time, when I was playing football in Spain, I had their centre-forward so wound up he lost the plot, called me a ‘fothermucker’, punched me in the face, then tried to strangle our goalkeeper.

He got a 3 month ban from the league.

Ryo Miyaichi was at the same fancy dress party and went as a coniferous tree.

Word is he was in a serious relationship at the time and wasn’t looking to get picked up.

So you’re the fothermucker, I’ve waited 14 years for my revenge on you. And now I shall have it.

Was it all just a dream….

Did he used to read Word Up magazine?

More importantly; does he love it when we call him big popa?

2 of those 3 extras are false. I really hope the story from Spain is true! Something to aspire to!

No no no, Socrates plays up front as a number 9, he won the Philosopher’s World Cup final with a header in the last minute from a Archimedes cross.

Marx may have had a point about the offside, though

and yet here we are

England in final on paper ?

we certainly have a chance

there is always the sp*rs factor unfortunately

Nice to see everybody is optimistic

Blogs, you been drinking?

Croatia could have won had the guy chosen to score a goal into empty net, instead he went down like a puss

I love you, Blogs… You make the most obvious news enjoyable haha… Arseblog for life!!!

Barking up the wrong tree mate.

Can’t wait to see another picture of him!

I’m obviously sympathetic about Sokratis’ allergy to Llamas, but how do we know it is fatal? That would be rather difficult to check, unless several family members have died of a similar condition.

Doesn’t look terribly mobile, has been average in Bundesliga last year. Old and slow and fat.

Exactly what we need.