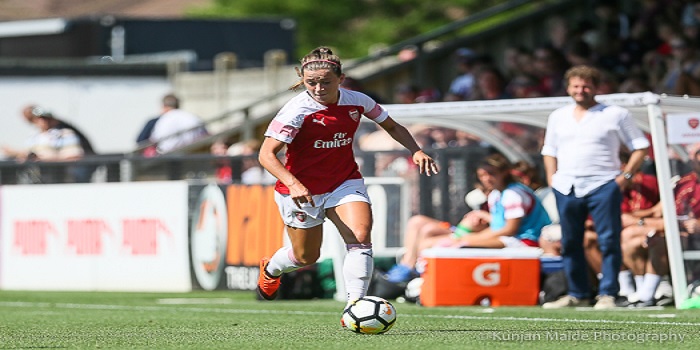 Arsenal Women were 3-1 victors over West Ham in the first group game of the Continental Tyres Cup, the trophy they won last season. Ireland captain Katie McCabe bagged a brace for the Gunners and Tim Stillman caught up with Katie just after the final whistle, exclusively for Arseblog News.

On starting the season with two goals and an assist……
It’s a great way to start the season, obviously I am really pleased to score two goals, but the team performance was really good today. We’ve worked really hard during pre-season and we’ve worked on the sequences that we want to play in and that paid off really well today. The goals were just a bonus for me.

On playing in a completely fluid front 3……
It wasn’t something we worked on just this week in training, we worked on it from the get go in pre-season, I love playing all across the front 3 and I think that’s showing in the games. In pre-season we really tried to nail that down and interchange positions all the time.

I’ve been starting games as an inverted left-winger which has been working well, but the balance of the whole team was really good and everyone was on the same page today. We’ve got a baseline to work from now, so we’ll keep working hard on strengthening that understanding.

What a performance from @_KatieMcCabe9 ??

Here’s the moment she grabbed her second and our third of the afternoon ? #WeAreTheArsenal pic.twitter.com/g2KKPQPLoF

On all three forwards being involved in the second goal….
We’ve worked hard on occupying the right spaces, but also coping with pressure and continuing to play even when we come under pressure. That was a really satisfying goal and credit goes to each and every one of the girls, we worked hard and that gives you the baseline to play good football.

On her loan spell at Glasgow City last autumn….
I’ve been thrilled with how it’s gone since coming back from Glasgow. Huge respect to Glasgow City for letting me go there to play and I hugely enjoyed my time there. It was about getting football fitness and rhythm back for me, playing 90 minutes regularly and I wanted to prove I could be a first team player here and that I could get into the starting XI. 2018 has gone well for me, but it’s about pushing on. Working harder, getting fitter, eating the right things, having the right lifestyle and being switched on all the time. 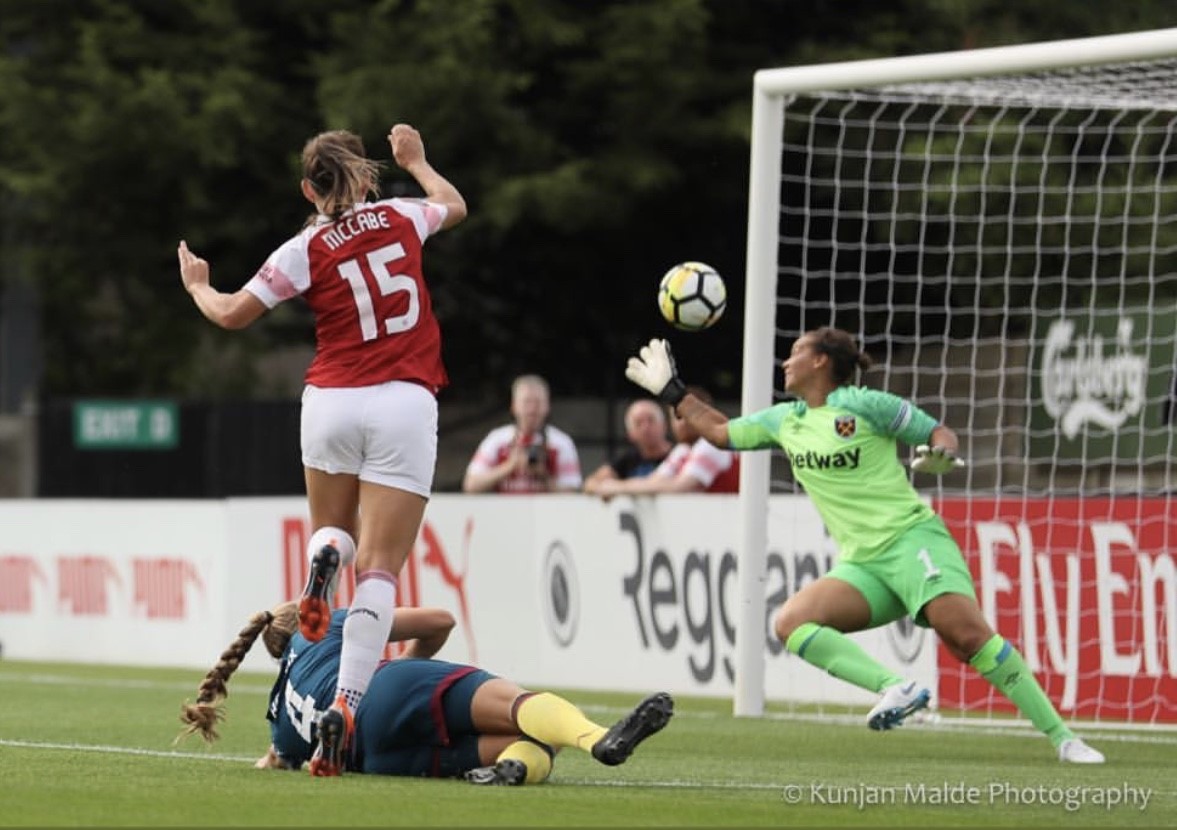 On West Ham coming back into the game in the second half….
I think we dropped our intensity a bit and sat off West Ham and let them back into it. They punished us for that, but the minute they scored (to make it 2-1) we tried to get settled again and get back to how we were playing in the first half. We focused on passing better, moving a lot and keeping the game simple. Then the third goal came to finish off the game, which we really needed.

On scoring the third and avoiding a nervous last ten minutes….
West Ham have lots of tricky players, the likes of Leanne Kiernan and Jane Ross up top, so you want that third goal because you know they can punish you. It came for us in the end and it settled the game down, really and to get the first win of the season is a great foundation for us.

So glad to be part of this Arseblog evolution. The blog is now covering all aspects of our Club and you’d be hard pressed to find another which does this at a level that is comparable to the official club’s website. In these murky “silent Stan” days we need a voice on the ground that has both access to and independence from the institution Arsenal. To speak to and for us.

Fantastic performance by Katie and the girls.

I love that you guys are giving the ladies some due attention. Just wondering why the aspect ratio on a lot of the photos on the ladies posts are so wonky.

Not the worst crime in the world, but it’s a bit distracting. Sorry to be the nitpicker.

Yeah, sorting this. The site needs photos in an unfamiliar resolution so I have to edit them.