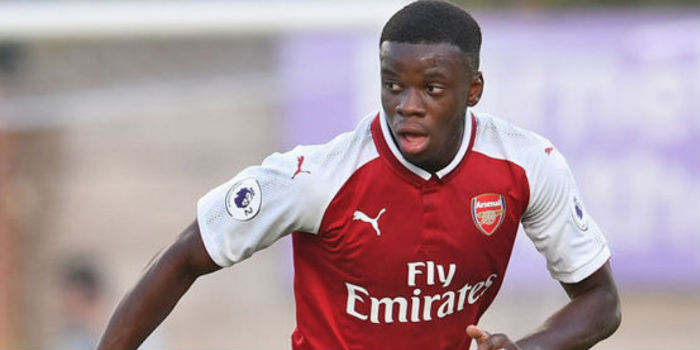 Arsenal striker Stephy Mavididi has travelled to Italy ahead of a possible move to Juventus, according to Football.London.

The 20-year-old striker is yet to make an appearance for the Gunners first team but has garnered senior experience on loan at Preston and Charlton, although both stints at the Valley were marked by serious hamstring injuries.

Behind Eddie Nketiah in the pecking order and with Danny Welbeck, Alex Lacazette and Pierre-Emerick Aubameyang regular starters, it looks as though the talented Mavididi has settled on leaving the Emirates to further his career.

Juventus, who this summer splashed out big money on Ronaldo, appear to be recruiting him for their B-side. It looks like an exciting move, even if he’s unlikely to see much first team action in the short-term.

Mavididi isn’t the only young British Gunner to head abroad in recent seasons. Earlier in the year Marcus McGuane moved to Barcelona and Kaylen Hinds went to Wolfsburg.

He was injured just when he was starting to develop nicely, and realistically isn’t going to make it at Arsenal, but he’s a very good young striker with lots of potential. It pleases me that our young British players are prepared to move to other leagues to further their careers, it takes courage and self-belief. The way our young players are coached means they probably fit in better in Europe than in the lower leagues here, so I think it’s a good move for him. Good luck to him, I hope it works out well.

This has to be good for our game, we now have talent that other countries actually want to steal away from us.
We’ve not had many exports, the excuse being us Brits don’t travel well….
I’ve never really signed in to that idea, I think it’s that we just haven’t produced anywhere near the amount of quality or star quality as other nations.

Nah, they deffo didn’t. Many brits got loads of international offers, but most didn’t take. Remember in most countries, they don’t have the opportunities of the UK, so going abroad is pretty normal to them.

But recently many academy prospects are realising the way they’re educated doesn’t suit the lower leagues, and as a few take the risk, others are beginning to realise its worth it.

Wages could be a consideration. And of course leaving the Premiership means you’ll probably never return unless you turn out to be world class.

Good thing nobody told that to Mustafi, Matic and Lewis Holtby.

Players like Keegan, Ince, Gasgoine, Beckham etc have done it but it was the exception rather than the rule. That’s changing now with the new generation and that should be celebra- oh what’s that? Brexit? Nevermind lol.

Wow! That came out of nowhere. While it is sad to see us losing an exciting talent, the fact that giants like Juventus and Barcelona are looking at our youth system says that we are doing something right on that front

Really interesting one. Akpom and Afobe dropped down leagues but this time a bigger team is looking at a player we apparently don’t fancy as much. I think he’s rated but there’s never even a whisper of him to be in our match day squad. And he’s 20. Young but older than Eddie, for example. We have brilliant options ahead of him but still…he simply cannot be closer to their first team than ours. Of course a huge part of the move will be wanting to play for a huge club but I don’t get how he makes it at… Read more »

i thought mavdidi was the best striker that cane through our academy even though we had akpom and afobe……until i saw nketiah. mavdidi is probably unlucky that he had to compete with nketiah for the sane spot. both are very good players and both scores loads of goals . but nketia has that something different that makes him even better. and i hope nketia comes throgh like we all hope

Speaking of Kaylen Hinds, a few days ago I read that he is AWOL and hasn’t reported for pre-season with Wolfsburg yet. Apparently, he has lost his passport in the UK and is awaiting a replacement. I think he was due at Wolfsburg three weeks ago, but fast-tracking a passport in the UK only takes a week. So…

Clearly they see something about him in Italy – Golden Boy nomination, Juve interest. Be a good move for the lad, sure Juventus’ B team have only just begun to play in Serie C, however its competitive football and Serie A & B teams will be over him like a rash if he has a decent run. Italian sides aren’t shy about selling on youngsters (or part ownership) and buying back, so won’t be stuck in the endless loan loop someone like Akpom has been on. Downside is we probably won’t see a sell on clause in his contract, or… Read more »