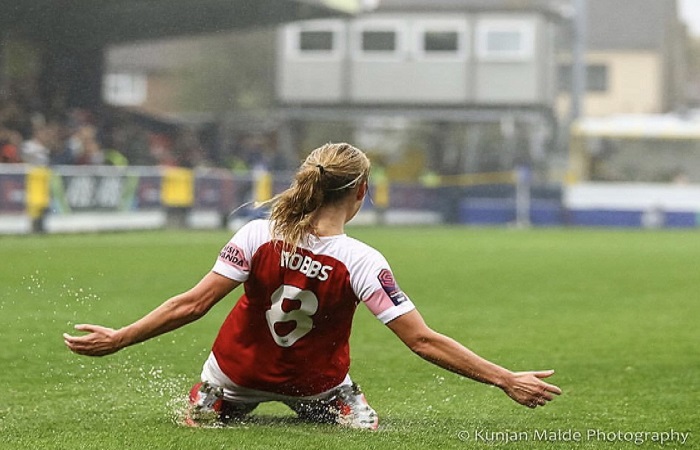 Arsenal Women made quite the statement on Sunday, thumping defending champions Chelsea 5-0 on their own patch to maintain their perch on the top of the WSL. Tim Stillman spoke to Jordan Nobbs, who scored a brace, immediately after the final whistle, exclusively for Arseblog News.

On making a statement in the title race……
We know we have been playing well this season and performing, but it’s still so difficult to come to a place like Chelsea who have got so many top players. I’m so proud of the players today, I think we showed a true team performance, to score that many goals and to be that clinical just shows how we’re clicking as a team and how Joe has developed us.

On Jordan playing slightly closer to goal than usual…..
When you play teams like this you know the talent that we have, but it’s still difficult to get up the pitch. We’ve got myself and DvD (Danielle van de Donk) and a lot of fit players who can really press, so we wanted to put their players under pressure and then it was about being in the position to score goals like we managed to today.

NOBBS MAKES IT THREE WITH A STUNNING STRIKE! ?

On confidence being high in the Arsenal squad…..
Our performances this season have really given us a lot of belief, we know we’ve been playing well and we’ve been scoring a lot of goals, so today wasn’t a one off or a coincidence. We’ve been developing over the first few games of this season and today was a proper team performance from front to back.

On whether Arsenal spoke about the game like a decisive match in the title race……
You can lose points quickly in this league, so you’ve no choice but to treat each game the same and take them as they come, but today has been a turning point for us in terms of winning here and showing that we are serious about winning this title. But there is an awful long way to go and I know it sounds boring, but we have to stay grounded and focus on every game as an individual match.

On whether it her first goal was a shot or a mishit cross…..
I said to the girls I should keep this quiet, but yeah it was meant to be a cross! But I’ll take it! I was so glad my second one went in so I could show that even if I’m a really bad crosser, I can at least shoot when I mean to! But I was delighted to get on the score sheet, I don’t care how they go in or where they go in, I just want to win.

Is it a cross? Is it a shot?@JordanNobbs8 doesn't care and neither do @ArsenalWFC

3-0 up away at Chelsea! ? pic.twitter.com/zXPOZPeGid

On the influence of Lia Wälti in midfield…..
She’s aggressive, she wants to get on the ball and she’s very tidy in possession. If we want to play like Arsenal and pass out from the back, it’s great to have an anchor like Lia in there to help us with that. She’s been getting stronger and stronger in every single game and she really allows a lot of freedom for me, Kim and DvD to move around. She provides us with a lot of security and she is great at getting the ball to us. She’s been phenomenal so far and long may that continue.

On the vocal away fans…..
I said in an interview a few weeks ago that they are the unsung heroes of this season, we know we need to perform as role models on the pitch, but they are a massive part of us and they are like the 12th player in our team.

Arsenal’s next game is at home to Reading on Sunday, 21st October at Meadow Park, tickets are available here.

Fantastic result today, we seem utterly unstoppable at the moment. I don’t have BT Sport and couldn’t get to the game – do you know where we can see full highlights?

Crazy that you can attend Arsenal women’s games for 10 pounds! Gonna start attending and I urge you gooners to join me in supporting our ladies team!

£6 if you order online I think Tim mentioned on the podcast.

Highlights will be on FAWSL’s YouTube channel tomorrow, I’ll stick them in my weekly round up going up tomorrow evening.

Just started to follow our ladies and what a first game. She is already my favourite.

Thanks for the interview, Tim. Wow! What a result! And to think I was worried about this game beforehand. This is like the old days of Arsenal Ladies – we’re not just the best team, we’re also the best team to watch. When I saw the starting 11, I was concerned that it was a bit too attacking, shows how much I know! So clever of Joe to out-Chelsea Chelsea tactically. Drew Spence can do one, as can the ref who didn’t send her off. In the drive to professionalise the game, officiating standards have been forgotten. But that aside,… Read more »

I love this…. Golden trophy in embryo

That was absolutely sensational! Bossed it from start to finish.
So many goals this season already.
Well done to the team!
Bring on Reading!

Eye catching result. The womens team really does seem to be full of talent and good characters. Proud to be a Gooner

Why can’t we get in a DVD for the men’s team? Unai OUT! ?
Any result against Chelsea gives me a lot of pleasure not minding the competition. Now if we can double the scoreline against the spuds… Oh Lawd!
COYBG!