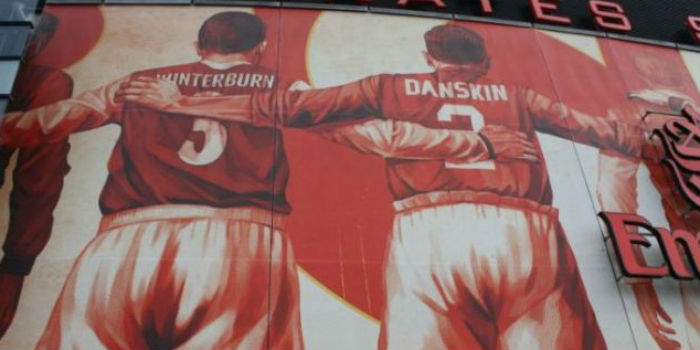 Arsenal have confirmed that they are working on a tribute to David Danskin after it was discovered the Scot, who was one of the club’s founders, is lying in an unmarked grave in Coventry.

Danskin, born in 1863, moved from Fife to London in 1885 and took up work at the Royal Arsenal munitions factory in Woolwich. A year later, he and a few of his fellow workers contributed funds to set up a football team. Originally named Dial Square FC, after the park in which they played, the team soon changed its name to Royal Arsenal.

Danskin gave up playing football in 1890, just before Arsenal turned professional. He went on to carve out a new life running a bicycle manufacturing business in Plumstead before he moved to Coventry to take up employment with the Standard Motor Company. He would witness the Gunners winning 6 league championships and two FA Cups before he passed away age 85 in August 1948.

In 2007, the Arsenal Scotland Supporters’ Club paid tribute to Danskin’s role in Arsenal’s history with the unveiling of a blue plaque in Fife, close to where he’d been born. Now the Gunners board have confirmed that with the permission of his descendants they are planning a suitable headstone for his grave and a memorial service.

A statement to Coventry Live reads: “David Danskin is one of the founding fathers of Arsenal Football Club.

“With fellow workers in the munitions factory in Woolwich, he founded a team with three friends, each contributing a sixpence and Danskin adding another three shillings to buy a football, in October 1886.

“Arsenal is a football club whose community values are as true today as they were back then and it is important that David Danskin has the recognition he deserves for founding our football club.

“We are working together with David’s descendants and our supporters to ensure David Danskin is remembered appropriately in his resting place.

“Arsenal Football Club is working with stonemasons to organise an appropriate headstone and looking at a date for a memorial service next year where representatives from the club will be present.”

In the meantime, eagle-eyed regulars at Emirates Stadium can find Danskin with his arm wrapped around Nigel Winterburn’s shoulders on the external mural and another tribute, where he sports a dashing moustache, at ground level.

If you’d like to learn more about Arsenal’s early history, we can thoroughly recommend ‘Royal Arsenal – Champions Of The South’ by Mark Andrews, Andy Kelly and Arseblog’s very own Tim Stillman.

What a great man….thank you for founding the club I love so much..I’m sure wherever you are you are praying for our dear club to succeed and go back her rightful place which is at the top

There’s a difference between starting something and enhancing it. We wouldn’t know what it meant to contribute 6 pence and a further 3 shillings in today’s money considering he was probably an ordinary factory worker!
Honor to whom it’s due. I’m grateful his sacrifice gave me something to look forward to weekends and midweek.

What a churlish remark.

Nice to learn a little more about the history of our great club and in particular one of the founding members.
Credit to the Club and owners for taking the time to acknowledge the man and his significant role in creating our beloved Club

Will
Reply to  Kylie