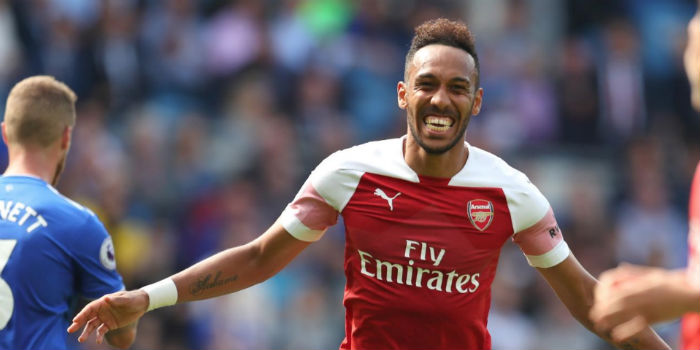 The £55m striker missed the 3-0 win over Qarabag in the Europa League due to illness, but he should come straight back into the team for the game at Craven Cottage.

Whether he starts on the left, or up front in his more natural position, remains to be seen, but the form of Alexandre Lacazette gives the Arsenal boss some thinking to do in that regard.

Aaron Ramsey is also available having asked to be left out of the European encounter due to his wife’s pregnancy.

Emery is hoping to make it 9 wins from 9 in all competitions, and said that the midweek exertions would not be used as an excuse for a poor performance.

“For us it’s not a problem to play on Thursday and then on Sunday because we want to play a lot of matches and a lot of competitions,” he said.

“Fulham is a very big challenge for us, first because it’s away and second because each match in the Premier League is very, very difficult.”

Perhaps Emery used a 3-5-2 against Qarabag as a way of trying to get Lacazette and Aubamayeng playing up top together, with Ozil in his natural no.10 behind them…?

It’s possible, but Id prefer to see 4-3-1-2. S we haven’t got any wingers we’d be better off focusing on our strengths than trying to squeeze everyone in

Im thinking something like 3412. Wingers not needed, Kolasinac and Bellerin as wingbacks. Torreira and Xhaka or Ramsey in midfield with Özil ahead of them. Lacazette and Aubameyang up top.

Everyone in their best position, on paper at least ?

Yeah 4312 is probably best suited for our squad.

Absolutely. Even at HT in games. Funny how we all assumed Monreal must have been injured when he came off. What? Tactical changes? Who’d have thought it at Arsenal!

Alexis is on the bench, his team is desperate for a result against Newcastle at home and Mourinho is sad. Shadenfreude trifecta.

Yeah really fucked that up

No, that’s okay. The longer this drama plays out, the funnier it becomes.

His players hate him so much. It’s delightful

Yeah, we want them to be shit, but not so shit that they sack the cunt in charge who’s causing it.

Ramsey’s available? He should stay home again. He asked to be taken off during the win at Newcastle — five games into the season after having no involvement in the World Cup — because he was feeling too tired. What about his world-renowned “engine?” If he couldn’t be bothered to be with the team in Qarabag, but found time to go to Guyancourt, he should continue to rest and tend to his wife. The team will be fine without him. I’m certain of it.

I think I’d like to see Aubameyang up top this game. One thing I’ve noticed with Lacazette is he doesn’t quite have the pace to finish the job when clean through and often has to cut back and pass. Still would have Lacazette on the field though, perhaps on the right with Iwobi on the left and Ozil behind. Ramsey should be on the bench as he’s not really justified his selection recently. Might give him some motivation if he has to get himself back in the team.
But what do I know, I’m just a wizard’s sandwich.

A noon kick off is ridiculous. What’s wrong with 4pm? Anyway, Fulham appear to be very light at the back; their full backs last week Bryan and Fosu-Mensah are both out injured, Chambers is ineligible, Mawson has had a back injury and may or may not be back (pun intended). Really no reason why we can’t go there and score 3. Enjoy the game!