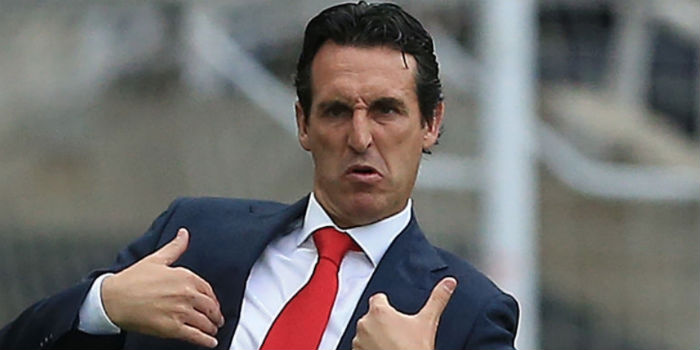 After what Unai Emery described as a ‘very bad day’ for injuries, Arsenal were pressed into using Stephan Lichtsteiner at left-back during the Gunners 3-1 win over Leicester at the Emirates.

Injuries to both left-backs – Nacho Monreal and Sead Kolasinac – left us short in a position which was filled in the last 30 minutes by midfielder Granit Xhaka after his Swiss international teammate was taken off.

It added to defensive worries as we were without Sokratis too, but we coped well enough to take all three points and get our tenth win in a row under our belts.

Speaking after the game, Emery provided an update on the injuries ahead of the Europa League clash with Sporting on Thursday and the Premier League visit to Crystal Palace on Sunday.

“Yesterday was a very bad day for our injuries because we lost two in the same position – Sead Kolasinac and Nacho Monreal,” he said.

“They were in training with a small problem, but we did the group for today with both but this morning the news was they were not good to play.

“We had another player to help us like Lichtsteiner today and Xhaka – he played 30 minutes at left-back – but for us, for our balance it’s better if Nacho or Sead are OK to play in this position.

“We are going to look at how they are for the next matches, but I hope they can play on Thursday or shortly afterwards.

“Sokratis, he trained yesterday. I think he can stay for Thursday and we are going to look because now with a lot of matches in a few days it’s important the players get the good preparation.”

It’s a bit unclear as to whether that means the Greek international is going to stay in London to make sure he recovers fully, but we’ll find out in due course.

Arsenal 3-1 Leicester: Second half Gunners do it again as Ozil shines

With Monreal in the twilight of his career and Kolasinac not yet convincing I wonder what the plan is for left back. Am guessing the scouts are keeping their eyes peeled..

Nacho still looking fit and committed for the job. I hope he signs an extension.

Even so, age catches up with everyone and we need a back up if Kolasinac continues to struggle defensively

Got to look at Chilwell after yesterday performance in my opinion. Unai clearly favours attacking wing backs could be the solution as I don’t think we have anyone coming through.

There’s talk of Moreno on a free from Liverpool. I, unlike many of my fellow gooners, don’t take issue with a move for him. I think he could be a a pretty inspired acquisition if Emery can get him back to anywhere near the level he was when he had him at Sevilla. What I’ve learnt from the recent transfers of Salah, de Bruyne, Sanchez and Lukaku etc is that a player playing under one team/manager can be a pretty different animal altogether in another team or with another manager. Emery brought out the best in him in Spain, if… Read more »

Nachos in Montreal
Reply to  Lobster

I disagree.Its not that those players didn’t shine under their previous managers,it’s just that they were never given the chance(KDB,Salah,etc). (In the case of Sánchez and Lukaku,it’s just that their current manager is a fucking cuntbag).

Lobster
Reply to  Nachos in Montreal

That’s one way of looking at it. I’m of the opinion that its a low risk gamble worth taking with the current state of our finances. A big part of Emery’s value as a head coach, if some of his players’ interviews are anything to go by, is his ability to make those playing under him believe fully in their ability. Maybe Moreno is just shit, maybe this league isn’t made for him. This is all plausible, but if Emery sanctions a move for him then I would have complete faith in him to reignite Moreno into the force that… Read more »

Edit: I should say ‘rumoured’ state of our finances as nobody can really know what the situation is except for Stan and his people.

A Different George
Reply to  Lobster

I don’t think I ever saw Moreno play for Sevilla, and there must have been something for Liverpool to want him. And maybe some of his play has been influenced by losing his confidence–the home supporters groaning whenever you are announced cannot help that. That said, there is a reason they groan. I don’t see every Liverpool match, obviously, but he has been noticeably awful often enough that I am surprised that he is ever allowed to play.

Drew
Reply to  Nachos in Montreal

Interestingly, all those players weren’t great all playing under the same cuntbag!

We have the solution in our academy, with England youth international Tolaji Bola ready to take on the reins and give his all.

I’ve been very impressed with Chilwell for a while but he’ll probably be out of our price range, which is a sad statement to actually say.

Left back may be a target during the January transfer. Monreal unfortunately is getting up in age and Kolasinac hasn’t really made the position his own to say the least.

I know it seems to always be lurking and waiting to raise it’s ugly head but just for once can’t the injuries just leave us alone while we build something special please.

Pity that we don’t have any traditional academy graduated left back (Cole, Clichy, Gibbs) to come as cover.

We do in Tolaji Bola. He has also represented the England youth teams at various levels, playing left back.

Looks like Lichtsteiner at left back again this Thursday, he might be 34 but he’s still a good player, I’m sure that we’ll cope in Lisbon.

Or because he looked his age and doesn’t have a left peg so needed to change the balance.

He was our weakest player yesterday, I dot think leftback is a position he should be relied on for

Shame we don’t have any upcoming graduate from the academy

Maitland-Niles was on the mend, wasn’t he? I hope that Kolasinac and Nacho are back soon, but we should be able to cope…

How much longer is AMN expected to be out?

you want a piece of me? – Frank Costanza
https://www.bingeclock.com/fullsize_meme.php?img=seinfeld___want_a_piece_bouncer.jpg

We got Danny Welbeck who can fill in at left-back, so no worries!

LB as well as RB is a position that we need to address sooner rather than later, when it comes to LB Nacho has done a good job for us thus far but we need to start looking to the future, and I’m sorry Kolasinac is not it. If we can get Moreno in on a free that would be an upgrade to what we currently have which would also be a great piece of business. In regards to RB, Bellerin is decent going forward for us but a nightmare in defending so we need to find a RB who… Read more »

We are hoing to need them all. I was skeptical if the need for Licsteiner this season but as only happen to Arsenal, who would forsee us running out if LBacks with Monreal, Kolasinac and AMN As far as the future of LBACKS is concern, we should trust in Emery to improve Kolasinac first. AMN’s future position is also as yet uncertain and Monreal can go another season although preferably not as primary choice. Ideally we should be scouring market this summer f I r someone to replace Monreal otherwise but a lot depends on market and who comes available… Read more »

Isn’t AMN fit again? He can do a good job at Left Back if needed.