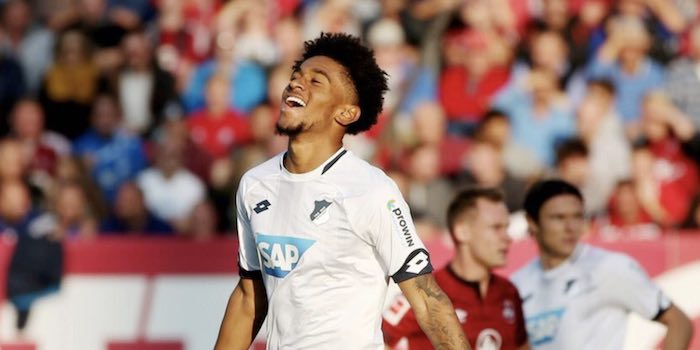 Reiss Nelson scored twice for Hoffenheim as they overcame a 1-0 deficit to beat Nurnburg 3-1.

The teenager started up front for Hoffenheim, and he hit a double in seven second half minutes, first to equalise and then to put Hoffenheim ahead.

His first was a cooly struck side foot volley, and his second was firmly hit into the roof of the net from a tight angle.

Nelson is now Hoffenheim’s top scorer in the Bundesliga this season, with four goals in as many games. The Englishman is in flying form, after scoring in both England’s U21 games in the most recent international break.

Hoffenheim’s next game is a Champions League game at home to Lyon, where Nelson will be hoping to continue his fine goal-scoring form, and such is his form he must be very much in the reckoning to start games on a regular basis.

It’s been a fantastic start to his loan spell, and having signed a new deal with Arsenal before making the move, it’s good for us to see such rapid development.

He’s on fire! Go on boy! We are all fully behind you.

Delighted for him and us!

So glad he signed a new deal! Would have been uproar if he’d have been there on a free transfer (rightly so)! Lets hope the form continues and he can grow into a superstar

Bayern Munich : Hmm that’s odd. How is it possible other teams have good players? Let us buy them immediately.

Well, they ain’t buyin’ this one….

They can fuck right off

Was thinking…IF Wenger ends up at Bayern and makes Nelson a top transfer target, that would make things ‘interesting’…

Wilshere at Bolton and Bendtner at Birmingham are all I can think of success wise. Did Vela do ok somewhere? Chambers at borough was good too imo but more debateable. None of them a patch on Kallstrom of course.

Szczesny at Brentford and Bellerin at Watford come to mind.

Szczesny at Roma is stronger.

Doesn’t look like Chambers is enjoying his Fulham loan spell much.. Played right-back today and got hauled off at half-time after getting rinsed by the Cardiff winger.

Make or break season for him!

He didn’t get ‘hauled’ off. He picked up a knock and was replaced at half time.

Yep – the BBC radio commentators seemed determine to blame him for everything, and made out that he was hooked off. From what I saw on highlights he was nowhere near as bad as made out and was taken off injured at half time.

Bendtner at Juve. That went well.. 🙂

Ryo Miyachi’s first for Feyenoord was pretty legendary for me.

Benayoun’s time at Arsenal was impressive

Germany seems the place to be for young English talent to show what they can do.
Sancho, Nelson and Lookman have all performed really well over there.

I hope this is some thing we do more often for our best crop of youngsters, to get really competitive games with good coaches.

Asano is also on loan in the Bundesliga, but it doesn’t appear he has any future at Arsenal.

Ivan The Terrible
Reply to  Vescucci

another kolkata gooner
Reply to  Vescucci

Nicklas Bendtner, eat your heart out.

Talent was never in doubt, but the temperament is a really good surprise. I hope he continues to play and maintains this momentum in his development. Eddie should be given the same opportunity to push through the threshold that stunts the development of talented players after they have outgrown youth football.

This guy is the bomb.Thannk God we still have a precocious talent with us.

Its a great day

Look at his movement… for both goals but I love his check back for his first. Really smart!

Enjoy your season and come back in the summer to fight for your spot. Mikhi will be 31 and Welbeck will be gone.

4 goals in 163 Bundesliga minutes isn’t that bad for a 18 year old in a foreign country, eh?

Links don’t work. Is it because I’m not on twitter?

No. I’m not on twitter either and they work done. Sorry I can’t offer a solution

Cancel his loan. Ramsey out siguardson in. Fernandinho or tiago or rackatic and mavripanos with socratis. No more cech please. His good 4 nr 2 keeper . coyg

Let me guess … you’re Canadian, and you’ve been taking full advantage of the legalization of marijuana?

No im a gunner. Im been realistic

If you are a junior gooner, take heart. Thumbs down occur when people don’t agree with your opinion. Not that they hate you.

Why are people unhappy. Ramsey is a going to sit on which ever top team gets hims bench. Just like all who leave arsenal . Im glad there are no new contract talks. Theres so many talented footballers out there

Wenger is going to coach bayern . His going to dominate world football. Thats all i say

Chambers meanwhile picked up a knock and was subbed at half time today for Fulham.

He’s had a few poor games for Fulham this season, made a few horrible mistakes. But then the whole Fulham defense have been poor this season.

They were trying to play Chambers at right back again. Callum is not a right back.

When we bring him back, we should ask him to bring Jadon Sancho with him.

A good loan season in the Bundesliga at a good club under a really good coach will set him up nicely for us next season.
Like a new signing even.
Bielik has been doing well at Charlton as well so some encouraging news on the loanee front.

This leads me to believe that we’ve gotten better at finding the right clubs for our loanees.

Rather than, you know, sending Gnabry to improve under fucking Pulis!

I’m pretty gutted Gnabry never made it. I thought he looked class.

You didn’t see the abuse he got when people thought just that. The poor guy had a crap tonne of shite sent his way on social media and he had to endure it until he was allowed to publicly declare he had signed an extension. How many of those vile twits apologised for overreacting and abusing a teenager? Not many, I imagine.

I am glad that Nelson is doing so well on his loan. This can only be good for him, and for Arsenal, in the long run. 🙂 Best of luck to him for the rest of the season!

Btw, am I the only one who hasn’t been able to watch the videos of the goals because Twitter tells me the account doesn’t exist anymore (when I tried the links yesterday they told me the account had been taken down, and today they simply say that no such account exists)?

Nah, page is fucked. If you google ‘hoffenheim highlights’ though I found a video with german commentary pretty easily.

they gave him the number 9 shirt hehe

I may have misheard, but on the German-language highlight video, I could swear that after his second goal the commentator called Nelson “der fox in der box.”

Richie
Reply to  A Different George

Which would make Franny Jeffers Der deer in Der headlights.

matthinc
Reply to  A Different George

Ha yeah I heard that too!

He is the man on fire, Nelson.

The links seem to be broken. You can also see the highlights of the match here: https://www.youtube.com/watch?v=61szlKFPu5U

I live in Germany but can’t tell you a single piece of current insight into Nelson or the Bundesliga. Sorry

Those links don’t seem to be working anymore.