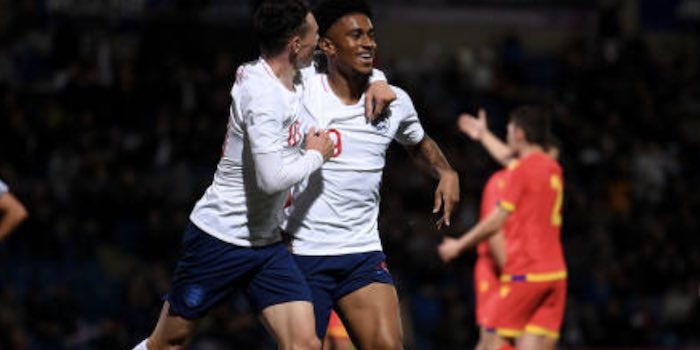 Yesterday we published a piece in which Reiss Nelson spoke about leaving Arsenal for Hoffenheim, and his ambition to return to London to be part of the first team.

His two goals for the Bundesliga outfit this season have enhanced his already burgeoning reputation, and he added to that last night with a goal and an assist for England U21s in their 7-0 win over Andorra.

Check out the goal below:

He had previously set up a goal for Liverpool’s Dominic Solanke as Aidy Boothroyd’s men won convincingly on the night.

Update: Thanks to Alan Smyth in the comments who pointed out young Gunner Daniel Ballard scored the winner for Northern Ireland in a 1-0 win over Iceland.

There are senior players involved over the weekend – check out who is playing who and where in this post – and we’ll keep you up to date with any relevant/interesting snippets from those games.

To xG or not xG? That is the question answered in today’s Arsecast!

I watched the u21’s last night – Nelson looked electric every time he got the ball. His pace was frightening and the way he shot past them knackered Andorra players was something else. He’s in some serious form right now and imblooking forward to welcoming him back to the Emirates

Gotta get shut of the likes of Mkhitaryan etc first!

That is a slick finish! Confidence must be high

Back Heels, that’s the thing now. Such confidence and intelligence from a young player. I’m proud of my team and the players both young and peak. COYG…

Interesting Nelson has said he might be back in a few months.

I really like Welbeck and want him to score a new deal, but if we’re hell bent on allowing him to leave? Selling him for £10mill in Jan and bringing Nelson back could be the way forward

Lets not forget Danny Ballard scoring the winner for Northern Ireland U21s last night in the 90th minute away to Iceland U21s. His goal means we can still qualify via the play-offs.
Sets up a game for second place against Slovakia on Tuesday Night. Looking forward to seeing a Gunner in the Green and White. GAWA Dare to Dream!

He is Admirable Nelson.

I didn’t watch last night’s U-21 until Reiss Nelson came on. After that I felt I was watching Kylian Mbappé’s equally-talented, less moody, younger brother. I had hoped I might see one or two bright moments, but everything he did was other-worldly. It was like watching a highlights compilation only in real time. It’s a counter-intuitive thing to say, but I think he’s better off in Germany than in London. He has a better chance to force himself into the Hoffenheim first-team than with us, and right now he needs week-in, week-out top-flight playing time and not just the odd… Read more »

But no mention of Daniel Ballard scoring the last minute winner for N Ireland away to Iceland last night?

Think it was me who pointed it out first! ?