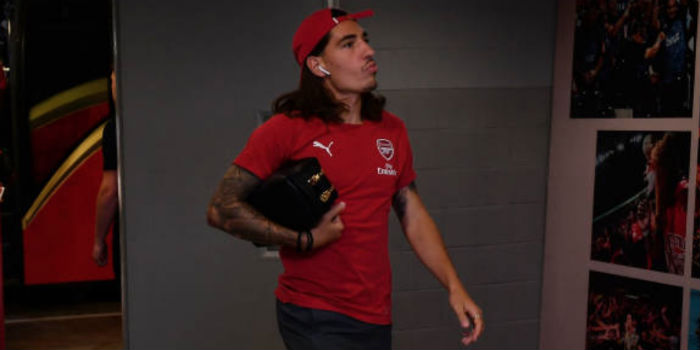 Arsenal have confirmed that Nacho Monreal, Sead Kolasinac, Hector Bellerin and Sokratis are being assessed ahead of tomorrow’s match with Liverpool with the medical team seemingly unable / unwilling to definitively rule out the injured foursome.

Monreal and Kolasinac continue to nurse hamstring problems picked up in training, while Bellerin’s thigh issue, which forced him off at half time of last weekend’s match with Crystal Palace, is undergoing further rehab. Meanwhile, Sokratis, who looked to have recovered from an ankle injury problem sustained on international duty, is again being looked at.

The Gunners will definitely be without Matteo Guendouzi, suspended following his mid-week red card against Blackpool, Mohamed Elneny, Laurent Koscielny and Dinos Mavropanos.

In all likelihood we could line up with a back four of Xhaka, Holding, Mustafi and Lichtsteiner with Ramsey and Torreira sitting deep in midfield. We’ll see. Perhaps Unai Emery will share more details in his pre-game press conference this afternoon.

The update seems to be a rehash of the previous one with the date changed. Let’s hope this is just sandbagging, and that Bellerin, Sokratis and Monreal are fit to play!

I hope it’s not the intensive training sessions

Bad news, our weakest point, the defence is looking much weakened. Hope some come back but can also cope physically for 90 minutes. If not we’ll struggle.

I hope we win, just not very optimistic at the moment.

Thoughts on AMN at LB?

Our lack of a functional midfield might bite us harshly in this match, which is why I might feel safer with Xhaka playing there. But maybe AMN would give us some good defensive cover in the centre too?

Just came back after having his leg broken. Too big of a risk to me.

Yes. Not ideal but equally as risky as Xhaka at left back and we need Xhaka in midfield.

AMN all day for me at LB. He’ll stop Salah from cutting in on his left foot. Xhaka is too slow for Liverpool’s front 3!

My thoughts exactly.
Would make a lot of sense defensively to play a right-footer in case Nacho can’t make it.
Might even prefer Lichtsteiner because AMN id still very prone to lapses in concentration.
Let’s hope the coaches give them some sdvice about how to position themselves in order to avoid stupid “Robben-goals” from Salah.
I trust Emery will have a plan. Let’s hope the players can execute it, especially in the first 20-30 minutes…

Kolasinac seems to have taken part in training at least…

If both bellerin and Lichtsteiner are available I’d definitely play one of them at lb ahead of Xhaka because, as pointed above, sala always looks to cut inside so it’s a lot easier to defend for a right footed player and maybe not as much of a disadvantage playing on the wrong side…could still be an issue going forward though.

Oops didn’t see that timsh had already said the same thing, my bad

Didn’t AMN play against Liverpool at home last year? Believed Salah scored, but AMN did a pretty fair job on him. Please no Xhaka. Much more needed in the middle in any case.

Definitely want AMN at left-back against Liverpool. Him being more skilled there than Xhaka is as important as Xhaka being back in midfield. It’s possible he was taken off early on Wednesday – after playing well – with an eye on Saturday. AMN might be a bit raw for the central position against this opposition. I really like him though. Even after coming back from injury on Wednesday you could see his first touch and composure are way above what you’d expect from someone trained at fullback and defensive mid. His control is more like a number 10’s. Even when… Read more »

In the event that it’s true, perhaps our man Sven could have a word with the mental one to stop attacking at 3-0 up.

Is it the November curse striking us?

Blogs – from what I gather Guendouzzi isnt suspended for Liverpool. The FA changed the rules this year and disciplinary records are competition exclusive. The arsenal.com mentioned this during the Blackpool game and theres also an article in the sun about it.

No, he is. The rule only concerns suspensions for yellow cards, however strange this is

Arsenal.com confirmed blogs’ statement about Guendouzi. He is definitely suspended for the Liverpool game.

I misread as defensive fearsome 🙂

I suggest if I may,I would like Arsenal to play Liverpool in tomorrow match,with this system of attacking football as usual and try to defense very well.Although the Arsenal defense are not really set,with plenty of injuries like captain Laurent Koscielny, Sead Kolasinac,Hector Bellerin,Monreal and Sokratis.All are Defensive foursome all doubts for Liverpool clash.We hope most of our injuries defenders are fit and prepare for the cash against Liverpool tomorrow PL.I have the strong hope that Arsenal will surprisingly win Liverpool,It is football anything can happen

Your thoughts on Brexit and the US mid term elections?

Liverpool is not the opponent we want to be short in the back against, they will run our outside defenders ragged if it’s anyone other than Bellerin and Monreal. It seems our “muscular” issues must be something in the water at the training ground or something as it’s the same issue we face over and over again under Wenger.

Pretty sure we’ll see Nacho – Sokratis – Holding – Bellerin tomorrow.
Nacho being out injured the whole week before starting on the weekend happened a lot last year too.
Hector getting subbed was precautionary.
Sokratis being rested against Blackpool indicates Emery will try him with Holding, which I agree is our best CB pairing.
Xhaka has been OK at LB, but can’t be asked to go up against Salah (paaaaace). And we really need Xhaka in midfield with Torreira.

This will be a really fun test. COYG

Completely off topic here, but the latest edition of The Arsenal Gent: pure gold!

One of my favorite bits by Blogs. That one, perfect!

If Xhaka is playing out of position again, I might just bring Salah into my FPL team haha.
Not bashing on Granit ?

God help us if Emery plays him there AGAIN. Surely Jenks or Maitland-Niles could do a better job and meanwhile Granit needs to be playing next to Torreira and feeding Ozil and co. The thought of Xhaka v Salah is almost comical.

Honestly, I think if we can see it Emery sees it too. If he still plays him there he might have seen something in Xhaka the LB that we haven’t haha

Sounds bad but let’s not forget that we’ve scored 24 goals for their 20.
CYOG!

Good point. Believe they have had some injuries lately, and Salah has not been as red hot as last year. (And let’s not get him going.) Winnable game, but we have to play close to perfect on defense.

Not entirely good news. Hopefully its a bit of mind games as well. But – Lback – AMN surely a candidate if Monreal and Kolasinac are doubts. I’d prefer in fact to start AMN before committing a just fit Monreal or Kolasinac. Recovery speed maybe key against Liverpool. Rback Lichsteiner will have to come in. Bellerin though would be great. Sokratis still seems to be suffering from the niggling effects of the last injury. I suppose we can start Mustafi and Holding but the former played 90 minutes against Blackpool. Its all a bit touch and go. The midfield will… Read more »

sallah against xhaka is like releasing a cow to a lion. it will feast on it. I believe Emery is going to surprise us. COYG