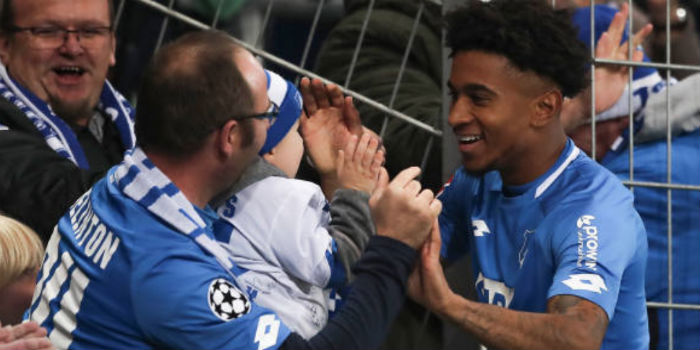 Work-experience kid Reiss Nelson took his Bundesliga tally to six for the season when he came off the bench to net the winner for Hoffenheim as they beat Augsburg 2-1 yesterday.

He was on the pitch as a late substitute for just 93 seconds before he calmly tucked home, meaning he’s now averaging a goal every 51 minutes; a freakishly good strike rate.

Just to emphasise what a cool cat he is, he celebrated by high-fiving a toddler in the crowd.

He scored not even two minutes after coming on for Hoffenheim ? pic.twitter.com/WDdNUM6OBo

Nelson’s goal helped Hoffenheim up to fifth in the table and afterwards, manager Julian Nagelsmann was thankful for the Englishman’s magic touch.

“Nelson proved himself to be a goalscorer,” he said after the victory. “It wasn’t a well-deserved win, but it certainly wasn’t undeserved.

“We tried to surprise them by playing a back four. The first half was hard to settle into and to make our mark on tactically.

“After our Champions League game, it took a bit of time to get the engines fired up but we did well in the end.”

No doubt, we’ll be back next week with another edition of Nelson’s column.

This young man is definitely going places…Arsenal would be wise to let him spend the full season with hoffenheim..recalling him would only disrupt the form he is in…no matter how much we need a winger right now…Nelson should stay in Germany…Arsenal and Nelson win-win that way

Playing with young kids makes everyone think Nelson is ‘armless.

Deadly in front of goal though.

Anyone else cannot open these links from titter?

Google Chrome doesn’t support this video format (or something like that).

Yet he’s only being used as an impact sub. Something not quite adding up here, surely he’s done enough to get a start.

He’s still learning. Game management and controlling the game is important when you start the game. He’s making meaningful contributions coming off the bench; he will surely develop further and start games for Hoffenheim. This loan is turning out to be one of the best for us in recent times, after maybe Wilshere and TGSTEL

He started and scored the first goal against Bayer Leverkusen last week.

“It wasn’t a well-deserved win, but it certainly wasn’t undeserved.“

That and Nelson, and Nagelsmann is a genius.

I can see this becoming a regular Reiss’s Pieces.