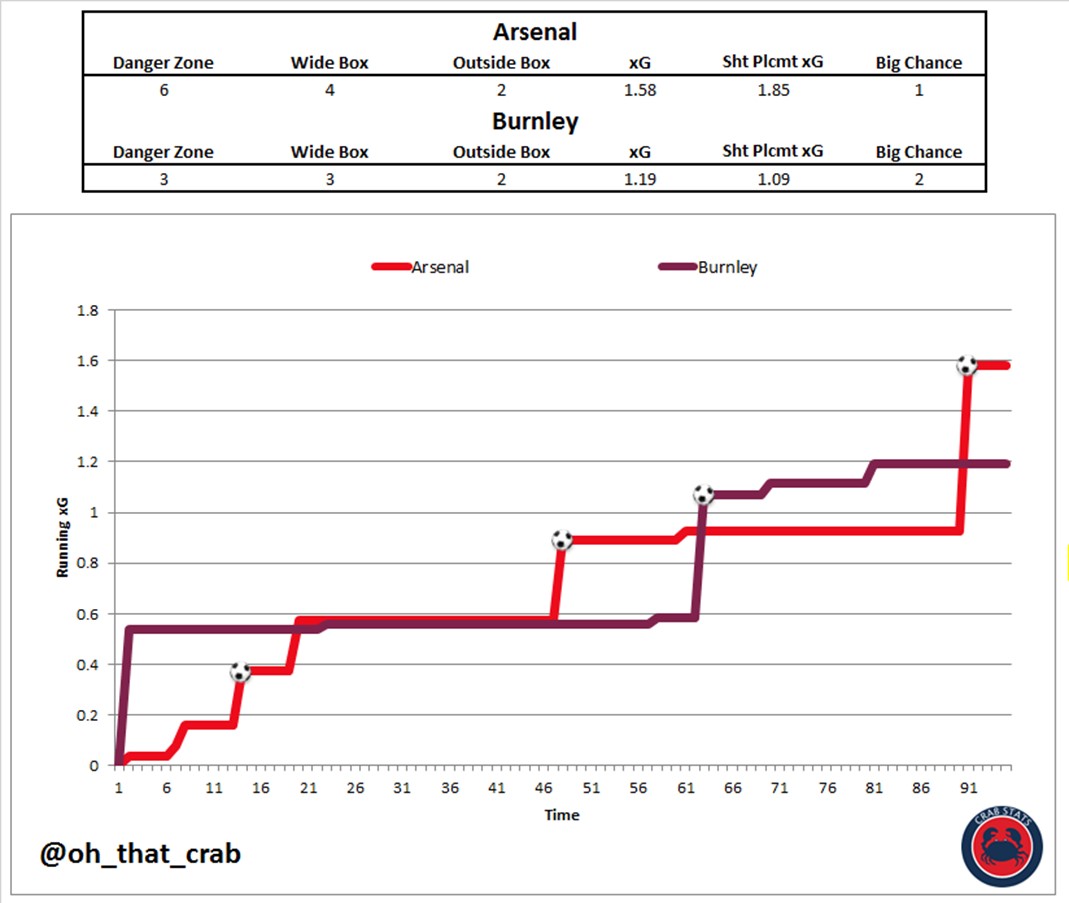 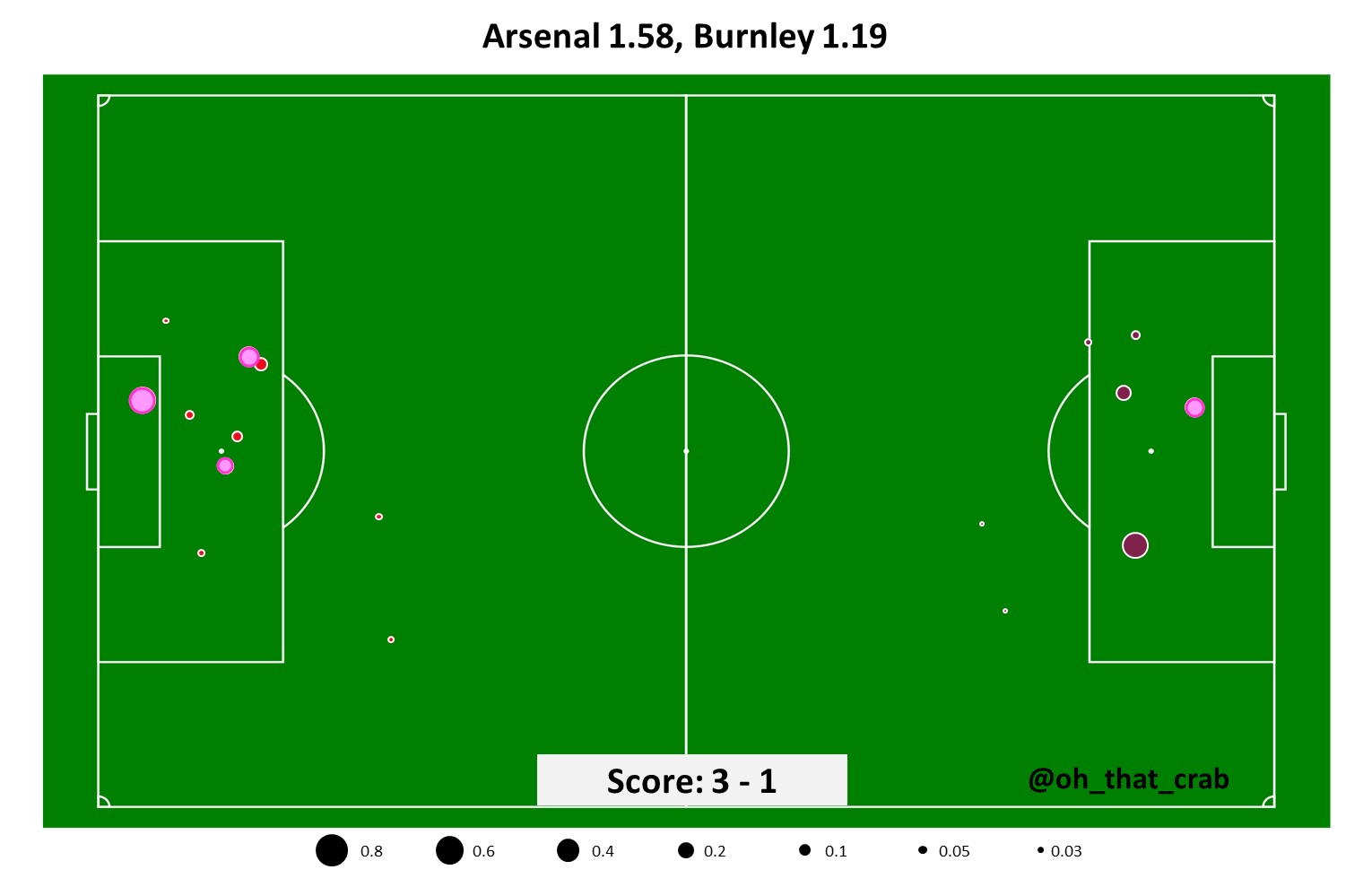 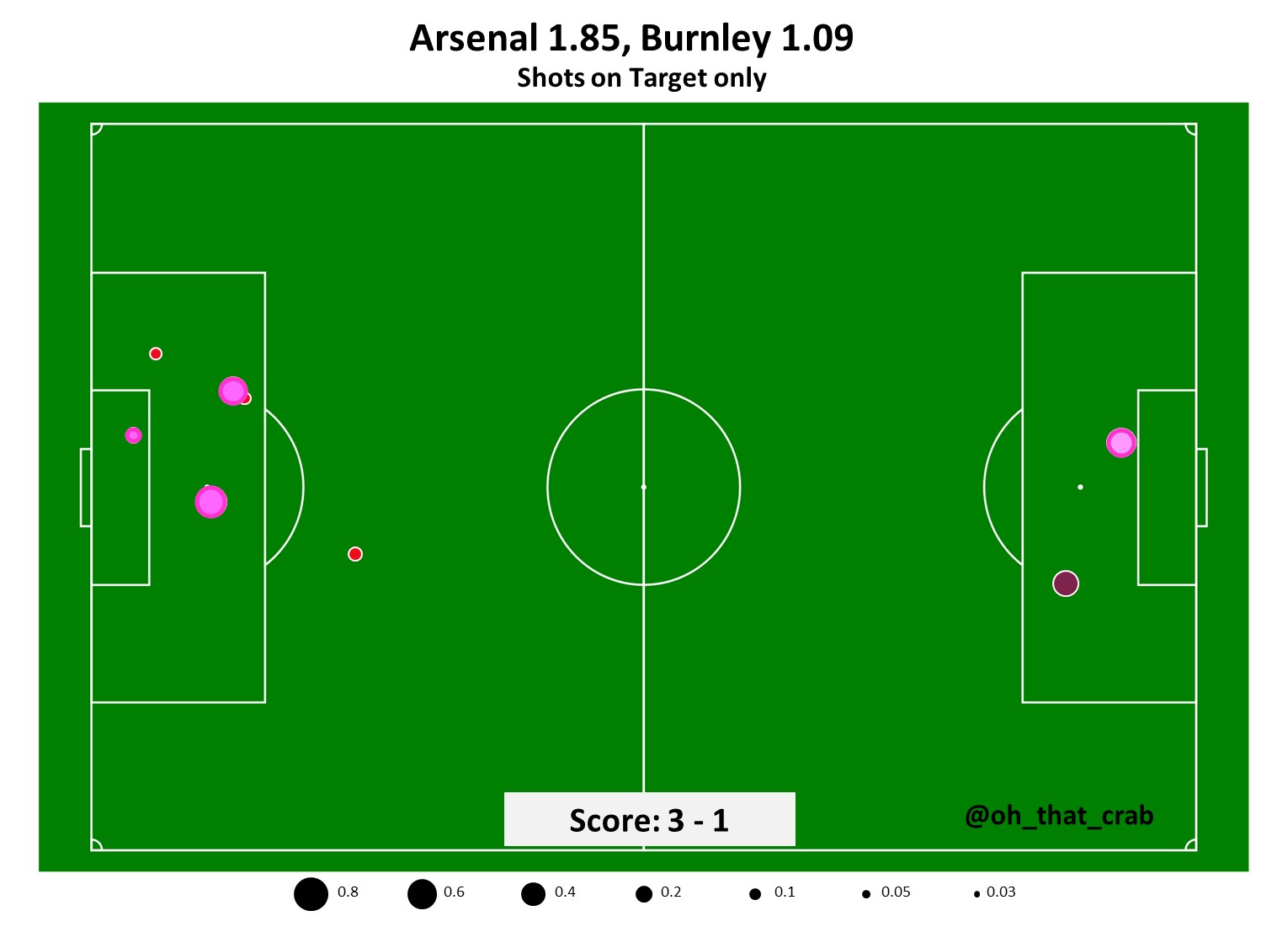 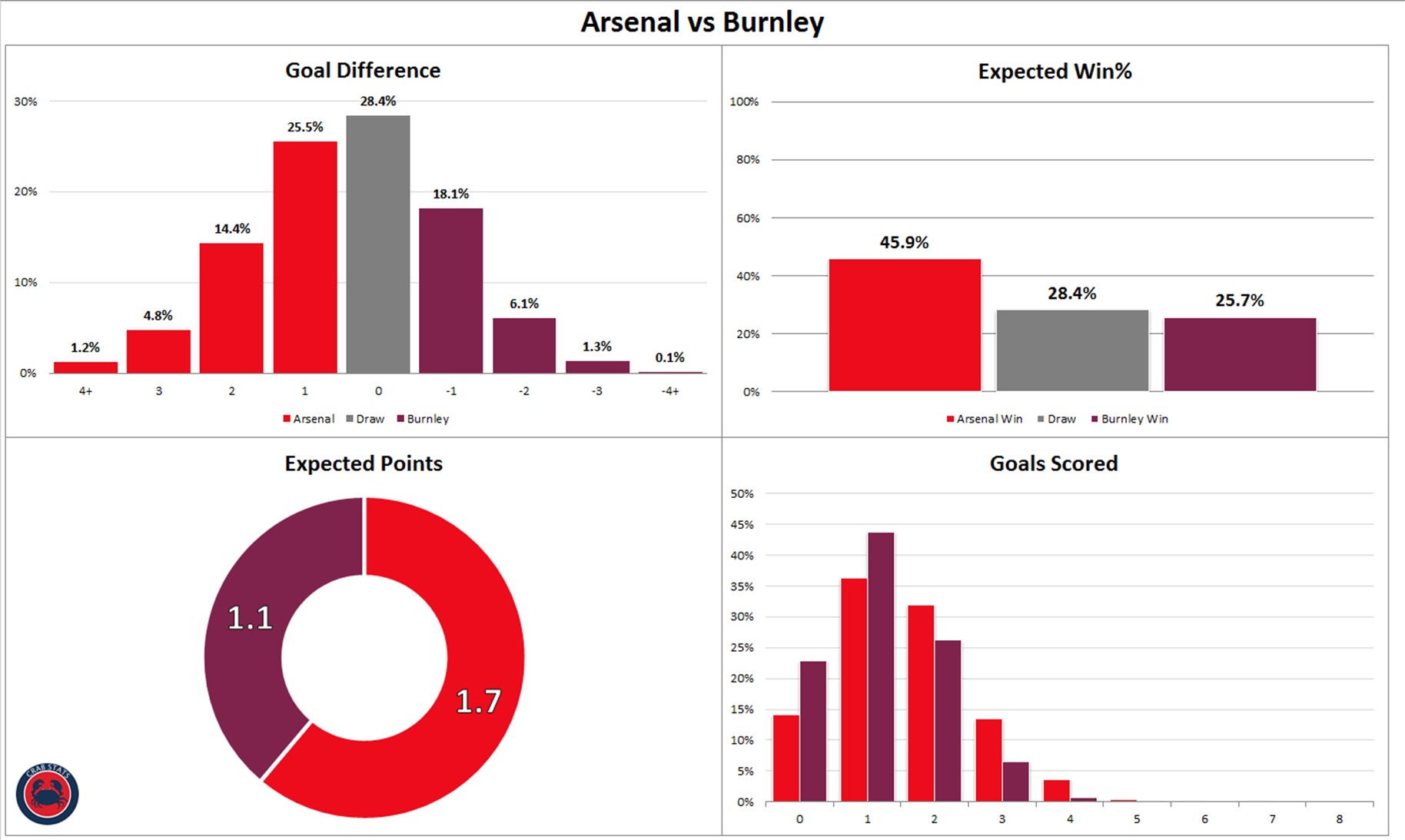 Arsenal finally go into halftime with a lead

17 – The number of matches in the Premier League that Arsenal were tied or trailing at half time.

90 – The total number of minutes that Arsenal led during that run, the longest lead was 35 minutes against Cardiff where they were almost in with a lead before conceding in first half extra time.

It is nice that we won’t have to hear about Arsenal’s weird stat about not leading going into half time anymore. In this match Arsenal did seem to come out as a more aggressive team. In the first half Arsenal took 6 shots to Burnley’s 2, with 5 of those in the penalty box and 4 going on target. What is a little more concerning is that after taking the lead and adding a second relatively quick after the restart Arsenal were really conservative…

2 – The number of shots that Arsenal had between the 20th and 90th minutes. During this period Burnley had 6.

4 – Shots total for Arsenal in the second half

167 – Completed passes in the second half for Arsenal, Burnley had 133

2 – Passes completed by Arsenal in the Penalty Area in the second half (of 7 attempts), Burnley had 6 completions and 14 attempts.

As this match progressed, Arsenal seemed to get more and more conservative with their tactics. To a certain extent this makes sense, with a two goal lead, your opponent is going to need to become more attacking to have a chance to get a result from the match. Looking at the Win Probability at that point Arsenal were given about a 94% chance of winning but I really think that overstates things given what Arsenal have in defense currently.

This might be a philosophical difference between what I believe and what Unai Emery believes in seeing out a game from a winning position. I think that the better strategy is to look to kill off a game be adding on more goals, while Emery looks to switch things to a more defensive style to protect what is already on the scoreboard.

I disagree with this, especially given the way that Arsenal are built and who they are facing. going into the match Burnley were allowing nearly 20 shots per match, 1.9 goals per match and over 2 expected goals a match. Basically they are a bad defensive team and that meets up with Arsenal’s strength as a team with a wealth of attacking talent. Maximizing your own teams strengths. In the end Arsenal were able to add a third goal to ice the game but if they hadn’t played switched styles that could have come sooner in the match.

Özil comes back into the squad

2 – Passes completed into the box, of 2 attempted

17 – Passes completed in the attacking third, of 17 attempted

1 – Defensive action, just one blocked pass in this match.

This match will give people on both sides of the Özil debate something to point to, to bolster their talking points. I think it pretty perfectly sums up Özil as a player, he is insanely talented at creating, passing and most offensive skills but if you are looking for defense you won’t find much. I thought that in this match he played really well in the first half but then in the second he really fell off.

My offensive value added statistic suggests the same thing, in the first half he was the best player on the pitch but in the second, he was pretty average. Again, depending on how you want to frame things you can take this a couple different ways with the narrative that you tell.

My own personal opinion is that his influence was diminished because Arsenal got conservative in the second half and especially with Xhaka pushed into the back line the connection between Özil in the final third and the middle/defensive thirds of the pitch was lost.

Regardless of your thoughts on things, I think we can all agree it was great to see Arsenal get back to winning ways, Özil to come back into the squad and provide a moment of magic, and for Pierre-Emerick Aubameyang to end the match leading the Golden Boot race.

Have a Merry Christmas if you are celebrating, if not enjoy some time off and lots of football!

It was harder than it should have been but that’s largely due to all the defenders we are missing. Loved the fight in the team even so.

With Chelsea and City losing that was a good Saturday. Hope United and Sp*rs do the same.

First of, I’m happy with the 3 points and that Chelsea lost,obviously. However, I think we should be able to control the match much better than we did. I know we have really bad luck with injuries etc. but compared to those knobheads our team should be far superior, at least technically. I actually did like Özil slowing things down a bit on ocation in the first half because we often lose the ball we just won through good defensive work very quickly. I’m with Scott that Özil just didn’t get many simple passes into him and it was therefore… Read more »

A Different George
Reply to  Timsh

Much harder to play out of the back without Mustafi and Holding to receive the first pass out wide and Torreira dropping back to present an outlet in the centre if the outside is not available.

We looked better in the final third with someone to connect the midfield to the strikers, which meant Aubameyang wasn’t the player with the most amount of passes into the penalty area. Lacazette and Ozil have so much chemistry around the penalty area. That first half was great from an offensive point of view, we dominated and should have kept our foot on their neck but this switch to conservatism is starting to worry me. We are giving teams the platform to attack us and our defence is poor at keeping the opposition at bay. Happy with the result, playing… Read more »

We need to be realistic and pragmatic in the 2nd half of the season. 1st to 3rd place are almost certainly taken. But 4th is all their for the taking. I think we really have a chance of this. Chelsea will carry on slipping I’m pretty certain of that. But Man U will go on a surge now the twat has gone because despite what many have said their squad is ridiculously talented and they’ve just been set free. All we need to do is ride through the storm of our defence being decimated and I honestly think we can… Read more »

Arsenal have 8 (and a half due to a 12 goal difference edge) on United. I feel pretty confident that they can hold them off. They seem like a more flawed team than Arsenal right now even with the manager change.

Why do you think 3rd place is taken? Are you sure we cannot catch Spurs. There is still a long way to go

It isn’t and I don’t mean to have sounded like I was. I think that the third and fourth spots will be between the three teams.

I don’t know if it would be better, I mean Arsenal did win using his method. In my opinion I think that playing to Arsenal’s strengths is better than trying to improve and rely upon a weak part of our team. More than anything it is a philosophy, I believe that you can defend through attacking somewhat (you’ll give up counter attacking goals and look bad at times) but also score more and by being in control of the ball the opponents can’t score. It really seems like if Emery gets a lead he likes to protect it, by becoming… Read more »

I agree.
However, I am sure he doesn’t like us to lose the ball as often. Even when going direct.
And I think our players should do better at controlling a match more at 2-0 up.
Let’s hope they can keep improving and get some injured players back + a couple of good aditions

I think we can continue controlling games better when we are in the lead, especially against smaller sides. It would minimise the risk of the opposition coming at our defence as we sit back. But it feels like a tactic for us to sit on a lead. I don’t know if he doesn’t trust us to maintain control, which is weird because we have always been a team that controls the game, whether we were winning or losing. I think focusing on our strengths and trying to take advantage of the opposition’s weaknesses, would get the best out of our… Read more »

3rd game this week with a defense that is in tatters. This month is hectic and the team plagued with injuries and the balance is therefore off. This of course will affect the numbers and the performance. Underatandably they turned conservative after loosing Monreal. Ozil is a fantastic offensive player his vision and passing is sublime. I would hate to loose him.

Lose*. This is an important distinction.

I agree with you–but aren’t you perilously close to advocating Wengerball?

This article is getting increasingly worse. Is this a stats based column or tactical? Because every week the writer bleets on about he’d have done something different.

Just some random observations: 1. Leno has been pumping balls long for quite a few weeks now and wonder what people would have said if it had been Cech. We lost possession on almost all these occasions, how does opposition get there correctly and we just end up losing the long ball mostly? 2. We have defensive issues and Xhaka to El is being played there but why is no one talking about Chambers? I’m sure he is better than Xhaka and El 3. Torriera uncharacteristically misplaced a few passes and took time to grow into the game, also is… Read more »