There are few feelings in sports more fun than beating your rivals. Especially when your team is able to come from behind, to turn that feeling of elation into despair for the supporters of that other team.

I am an overseas fan in California. I don’t often have real life interactions with other fans but today my luck was fortunate. I was out running an errand after the match and I had to fuel up my car, while I was there a Sp*rs fan pulled up to the pump across from me. I noticed that he was wearing a garish day-glo blue shirt that I thought looked ugly, and then I noticed the chicken and I chuckled to myself.

As he got out I made eye contact with him, pointed to the crest of my shirt (of course I was wearing my colors) and then held up four fingers. He looked at me, nodded his head acknowledging me, then kind of looked down in shame and said that we better be ready for the rematch in a few weeks. 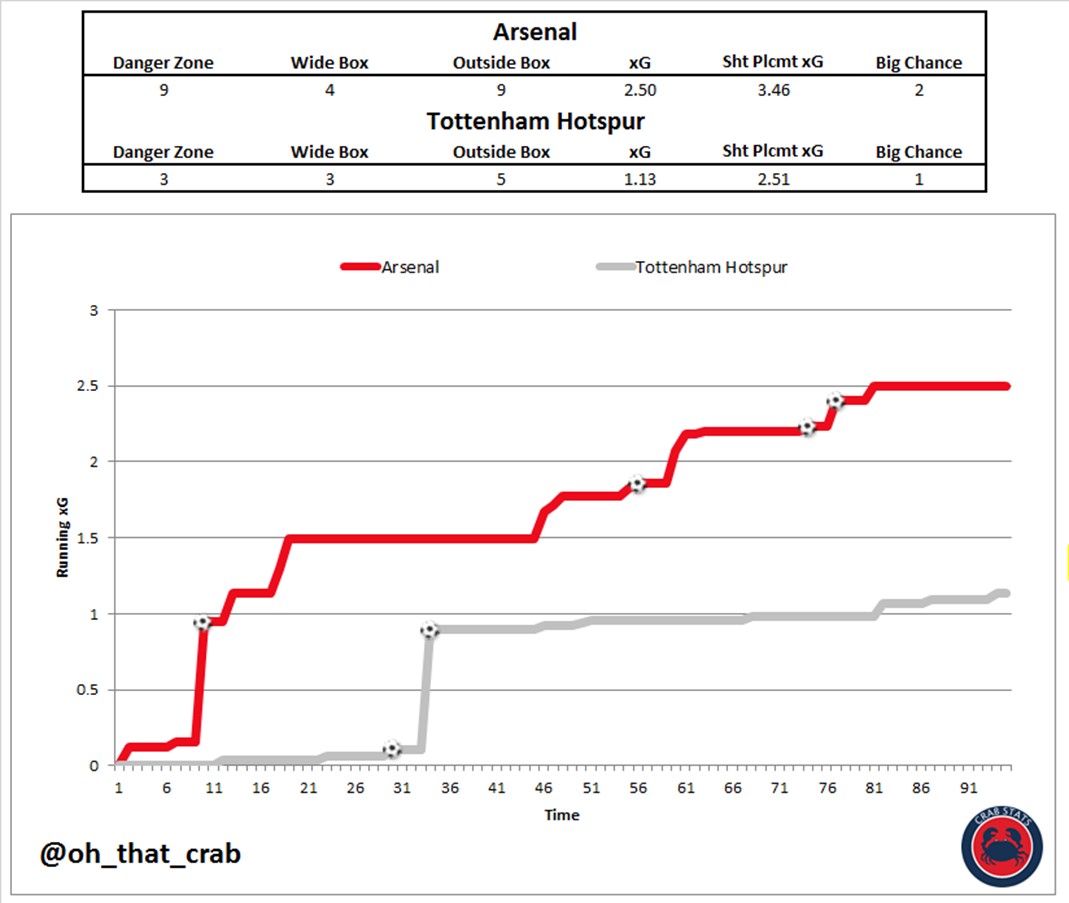 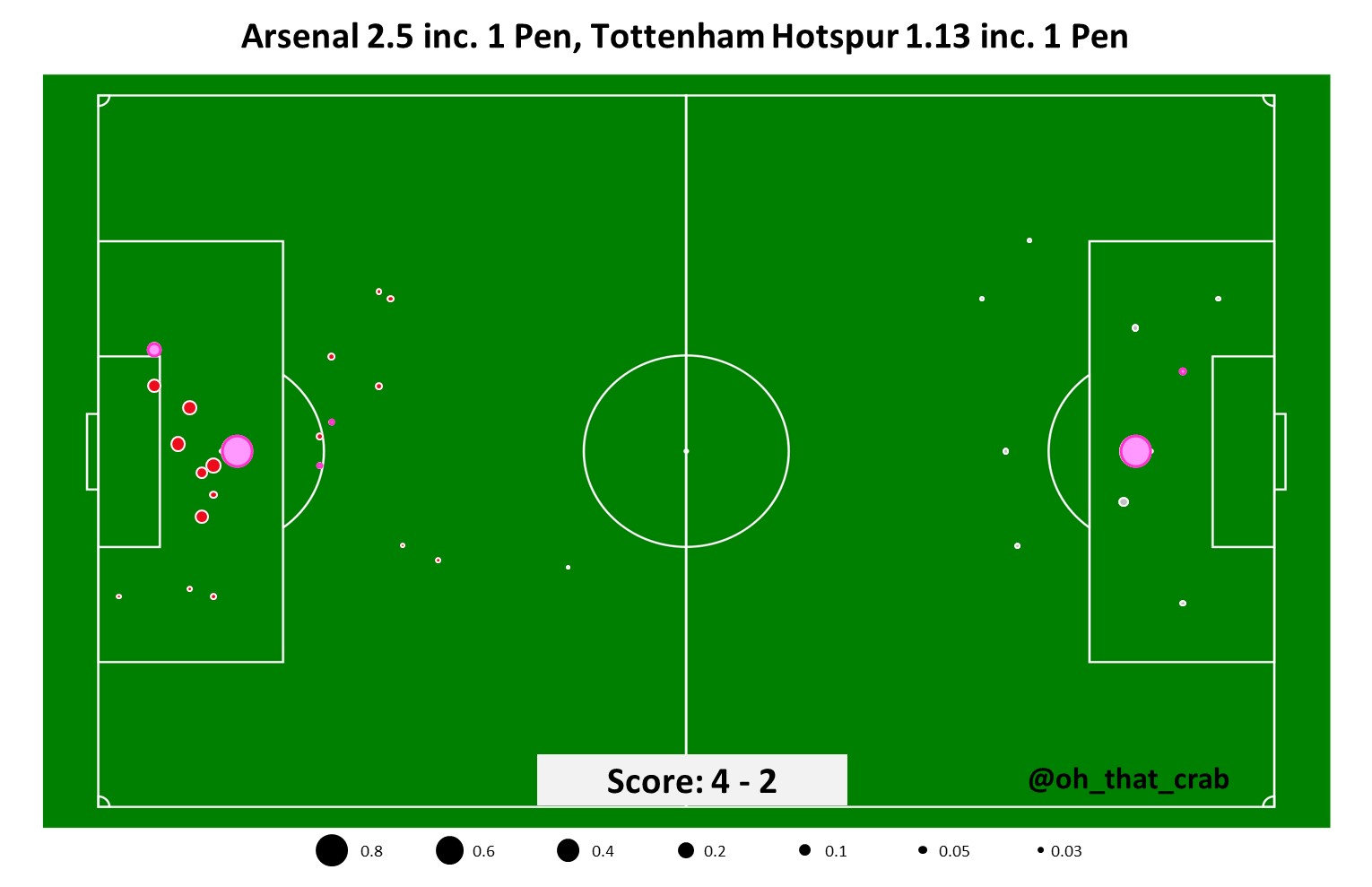 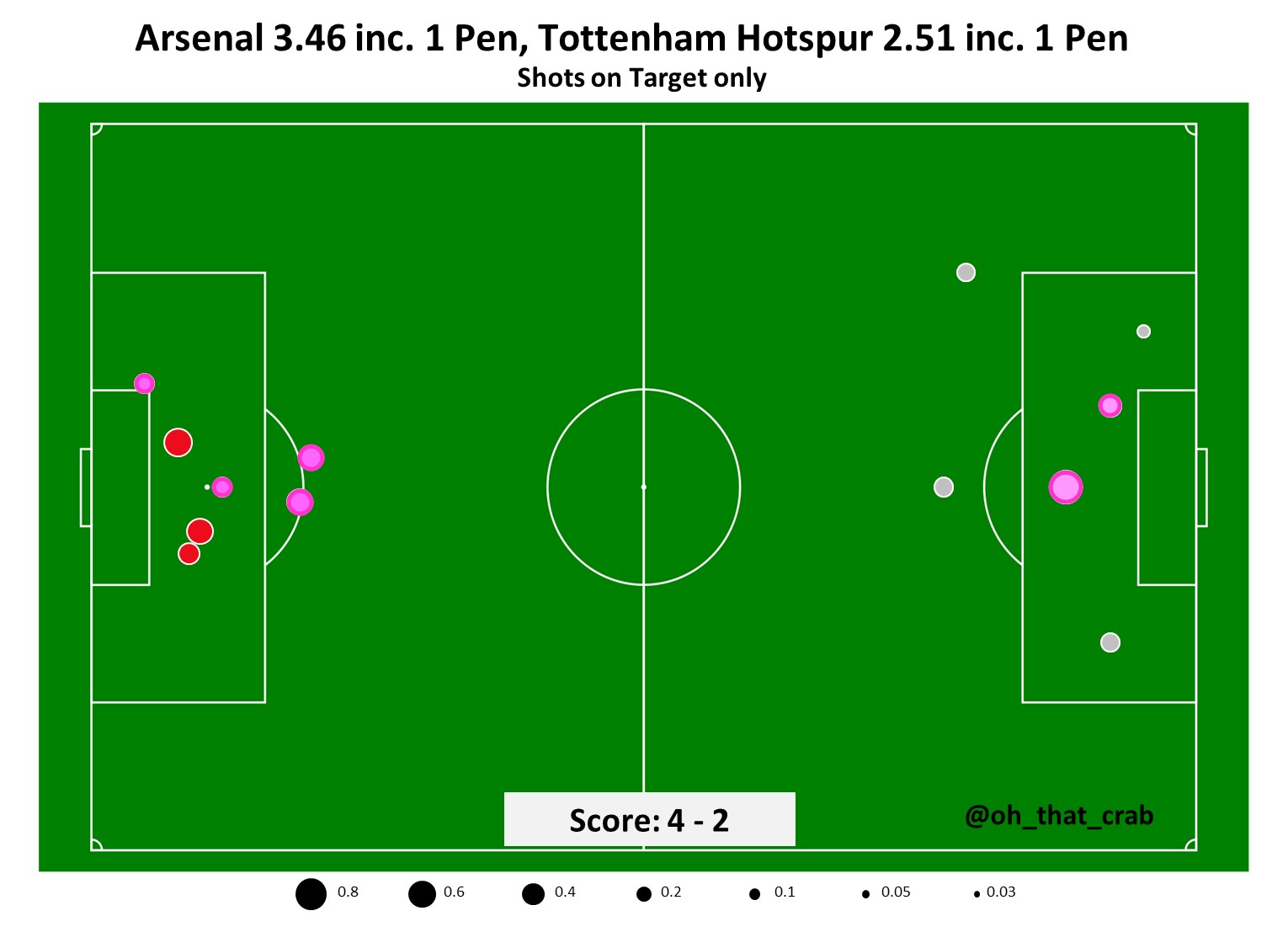 Simulated Match Results from the shots each team created 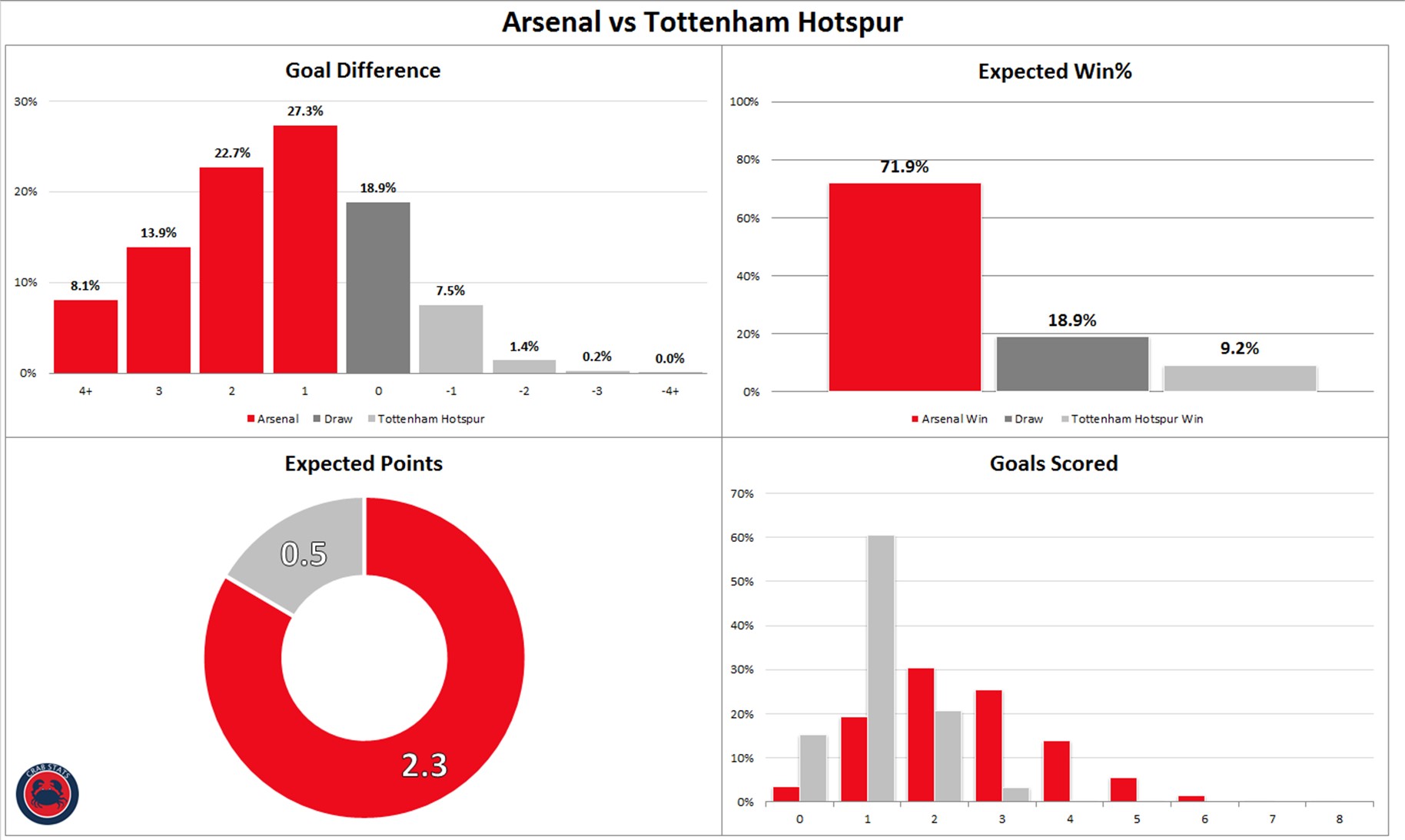 2 – Shots on target for Pierre-Emerick Aubameyang

This was the type of performance that you want from your record signing in a big game. Aubameyang set the tone early in this match, leading the very intense press that pushed Sp*rs back to start the match. He isn’t normally involved with play outside of the very end of plays but in this match the rest of his game really showed through. I was very impressed with his performance. In a game where Arsenal played well, he was the star of the match.

The back three neutralize Sp*rs

0.34 – The expected goals that Arsenal allowed (not counting the Penalty), that is the lowest non-penalty total Arsenal have allowed this season.

1.86 – The expected goals that Sp*rs averaged before facing the mighty defensive force that is Arsenal.

13 – The shots per game that Sp*rs averaged before running into the Greek God and his merry defenders. In this match they managed just 10 non-penalty shots.

8.8 – The number of open play shots that Sp*rs averaged before being run ragged by Granit Xhaka and Lucas Torreira. In this match they managed just 7.

25 – Total tackles that Arsenal had against Spurs

10 – Interceptions for Arsenal against Spurs

21 – Clearances for Arsenal against Spurs

15 – Blocked passes for Arsenal against Spurs

Arsenal’s defense played well in this match even with conceding two goals. Without the penalty in the xG, this was the lowest total xG Arsenal have given up in the League this season. This was also a great example of Arsenal racking up the counting stats on the defensive side of the ball, collecting tackles, interceptions, clearances and blocked passes.

Even better, this wasn’t against some bottom of the table club either. Arsenal did well to keep Sp*rs well off their typical season averages. Arsenal and Unai Emery are still getting used to each other but with a sample size of two games, this back three seems to be going some ways to solidifying the shaky defense.

4 – Passes completed into the box, 2nd on Arsenal

2 – Through Balls both completed in the final third, tied for the lead on Arsenal (with Hector Bellerin)

6 – Touches in the box, led all players

Kolasinac is a player with a lot of flaws, he isn’t a great full back and can look exposed when asked to defend at times. But get him the ball in the final third and he is capable of magic. He has really good attacking instincts and his size and power make him a mismatch for wide players to deal with. He is also really good at picking out his crosses and that skill has dovetailed nicely with Emery’s focus on working the ball for cutbacks.

The switch to the three at the back and the ability to use him as a wing back has really allowed Kolasinac to show the skills that put him in the Bundesliga team of the season before he joined Arsenal.

1 – Amazing celebration after said goal to seal a great comeback

3 – Shots total, including one earlier that was deflected just wide of the post

It feels like this is said every week, but man is Torreira fun to watch play. He has excellent ability to read the game and that skill allows him to feel like his is everywhere on the pitch. This match showcased his attacking skills which was something that he had hinted at previously but were fully on display. A great performance added to a growing list.

Sources: Opta via Whoscored, StatsZone and my own database.

Whatever Emery tells them during the half time talks must be the most inspirational talks on earth. I love me some Emery

“…and then I noticed the chicken”. Why is that line so funny ?

Love seeing how involved Auba was on the defensive side of the ball. I hope that’s a sign of things to come and not a blip.

Statically this is the best start S**rs have had in their history. And they are still behind Arsenal….

My bitter post game encounter with a spurs fan – I came out of the faltering fullback after THAT 3-2 loss, and this elderly woman came doddering up to me and said: “Young man, what was the score?” When I told her she just threw her arms up and shouted “yaaaaaaay”.
Fuck you old woman, fuck you.

Before the game I was in trepidation for Spurs had beaten the unbeaten Chelsea comprehensively.At most the gunners could draw.After Arsenals’ second goal,I believed the gunners were capable of winning and so it proved. So 1 of the top 4 has finally been beaten. Next stop MU. Don’t be surprised the gunners win again though the so will be desperate to stop his unwinning run. He will park the bus and hit on the break. I am sure Emery will deal with it unlike the fm whose predictable style was the cause of the gunners decay the last 10 years.… Read more »

Why is this so heavily downvoted? Ignoring the fact he ran it through google translate 4 times, it is a sensible take on the football match.

I swear voting on arseblog is so weird. It’s like if it has a slitghest hint of anyting bad, doesnt matter the context, these folks will downvote it to hell. Gunner smith told what all of us thought, like literally most objective thought was to get a draw, and still he is somehow downvoted like he said Captain America is coolest guy on Avengers

Xhaka is out of the United game… I heard since he has been partnering torriera in the midfield we haven’t lost any game in the pl…..but it is time for Guendouzi to step up on Wednesday and be a legend… Guendouzi loves the big stage I’m sure he would put up a fight in midfield against pogba and co…but if he doesn’t impress then Maitland Niles is ready to step into that midfield to excel….. Hmm.. A midfield of torriera and Maitland Niles won’t be bad though…but we need height against those freaking tall lazy united players.. So i go… Read more »

What a 2nd Half from Arsenal

What a 2nd Half from Arsenal!!!

I’m gonna miss Aaron so much

I really don’t understand why we are losing him.

Something tells me that Aaron won’t be leaving us. 🙂

I don’t want to speak too soon but I think we’ve found a manager who is a brilliant fit for us, and vice versa. I never saw PSG play with this sort of physicality and doggedness under Emery and perhaps he didn’t really have the power there to force that on to the side, or maybe it just wasn’t what was needed. Either way, it seems like what he’s bringing is exactly what we needed. The players seem to have bought in to what he’s doing and if last night was “the blueprint” for what we’re about then I’m very… Read more »

Exactly what Billy said 100% best day out i have had in ages. (Probably since beating Chelsea at Wembley)

Agreed, and big props to the players for buying into his ideas, and him for convincing them 😀

“better be ready for the rematch in a few weeks.” Its the league cup (or whatever it is called this week) and we will put the kids out…

Holy fuck, when did Ramsey get a personality on social media?! Give that man a contract.

I ran into a Spuds fan at the local REI the afternoon of the game. I’ve never seen someone more studiously, assiduously avoid eye contact in my life. All I could do chuckle as we passed.