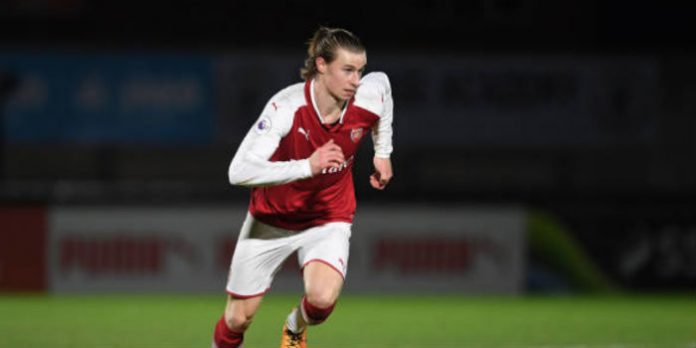 To say that the first half of the season has been frustrating for Ben Sheaf is an understatement.

The youngster, who has long had a reputation for being one of the club’s most exciting prospects, has spent the vast majority of the campaign so far on the sidelines and has yet to play 90 minutes.

A succession of injuries have meant that Sheaf has been unable to establish any sort of momentum but there was a boost for the youngster yesterday as he played the first half of the U23s’ defeat to Liverpool.

Sheaf didn’t show any signs of rustiness and demonstrated that his composure in possession, one of his key traits, remains very much intact, as he located Tyreece John-Jules with an excellent long ball from which the striker scored.

Arsenal lost the game 4-1, with Freddie Ljungberg’s side continuing their disappointing recent form, but Sheaf will be delighted to have not suffered any further problems and will hope that he can feature in the U23s’ final game of the calendar year against Blackburn Rovers on December 17th.

Should he come through that fixture unscathed, it seems likely that Arsenal will look to send Sheaf on loan in the January transfer window as, at the age of 20, he is not in a position where he wants to spend the remainder of the season in the U23s.

Last season Sheaf took some significant strides forward in his development as he featured twice for the first-team and gained experience on loan at Stevenage, but he is now determined to make up for lost time after such a difficult commencement to this campaign.

Over the past couple of years, Sheaf, having joined from West Ham United as a defensive-midfielder, has been moulded into a ball-playing centre-back and if Arsenal persist with playing three at the back in the long term then he cannot be discounted from being given chances eventually.

However, as well as the various first-team players in question, it also has to be taken into consideration that Sheaf is competing with the likes of Julio Pleguezuelo, Zech Medley and Daniel Ballard, while Krystian Bielik is still seen mainly as a centre-back by Arsenal despite having impressed in midfield while on loan at Charlton Athletic this season.

It is getting close to the point where a concrete decision will have to be made on Sheaf’s long-term Arsenal future, and he will be determined to make a major impact out on loan as he seeks to give himself the best possible chance of making the breakthrough at the club.

Fingers crossed. I rate him highly. Feels almost certain he’d be further on as a player if not for injuries- whether that’d be closer to first team picture, some opportunities there, a loan, or just more youth games and development under belt. A Gnabry like scenario must be among the possibilities now though, with the club unable to offer long term contract without more first team action, and a player chomping at the bit to really get his career going, and understandably seeing a permanent move to a smaller club as a better bet than either the loan route or… Read more »

Good to see Ben recovered from all those fitness setbacks.
Interesting to see that Stevenage used him in defensive midfield, where Bielik is currently playing for Charlton.
Two options as cover for Torrieira in the future perhaps?

I wake up in the morning and read the Arseblog stuff, and I go into the day informed and invigorated.
Bravo ……. what a fucking website!
Why don’t you push a little more for subscriptions etc?

Never been convinced of the old regime’s rule of any “big athletic” DM being turned into a ball-playing DM.

In a squad sorely lacking in DMs, surely having 3-4 converted DMs into CBs surely reduced their chance for success? Apart from limited opportunities, even game time at the reserves gets reduced.

We have talented youngsters like Beilik and Shaef, and now effectively have to 2 choose between the two as to who will get the development attention, let alone the other CBs we do have.

Never mad on it either. Hayden can be added to that list, maybe Dobson as well. Both used as midfielders after leaving. Plus may have been plan to start using Mcguane there (did at least once in last year). Meant switching from possibility of a powerful cm emerging, to an average or below sized cb. All while our greatest modern successes featured tall powerful midfielders and even our best youth team of recent times- Wilshere’s- had two tough tackling players in middle, Coq and Frimpong, bolstered by giant Jay Emmanuel Thomas. They could win any physical battle, and Wilshere provided… Read more »

I sure hope so. I still dread the days of when we lined up first with Gallas and Toure (neither breaking 6 foot) then Verm and Gallas, then Kos and Verm (Kos only truly came into his own once he was paired with Per).

Those days without a DM either and were suspect to those Allardyce Route One tactics.