Arsenal 2-1 Cardiff City: By the numbers

It wasn’t a pretty match but Arsenal in the end got three needed points while rivals struggled.

With re-enforcement coming in Denis Suarez and possibly one more attacker hopefully Arsenal can start looking a bit sharper as they push for the top four and a Europa League title.

Arsenal 2-1 Cardiff City: By the graphs 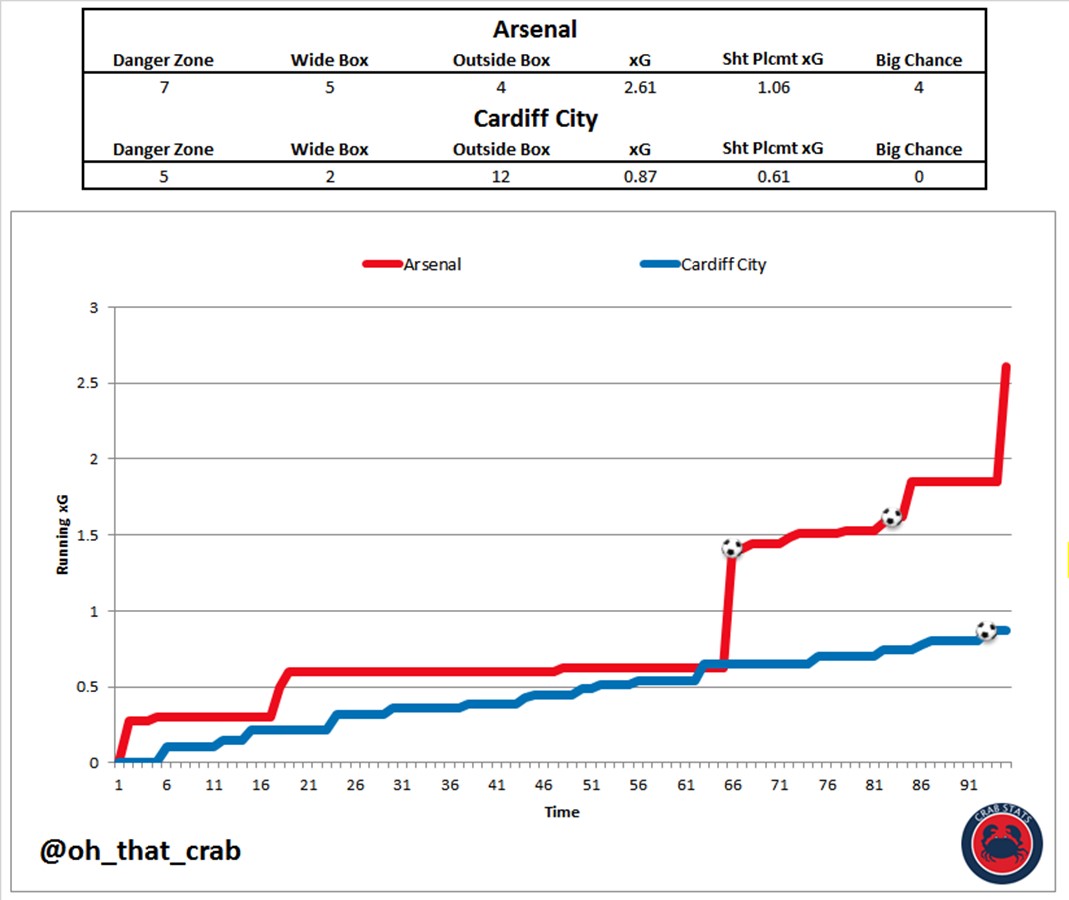 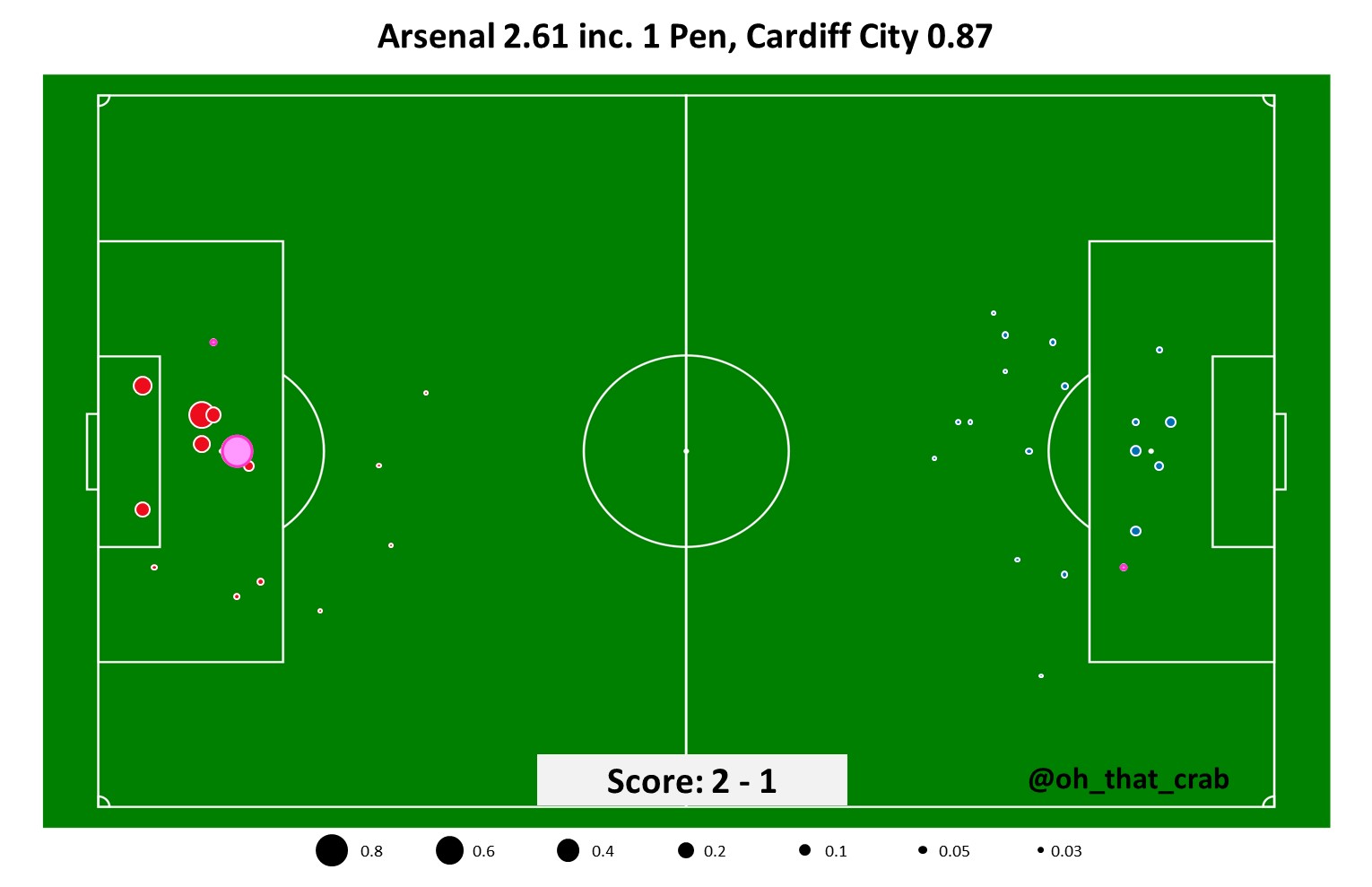 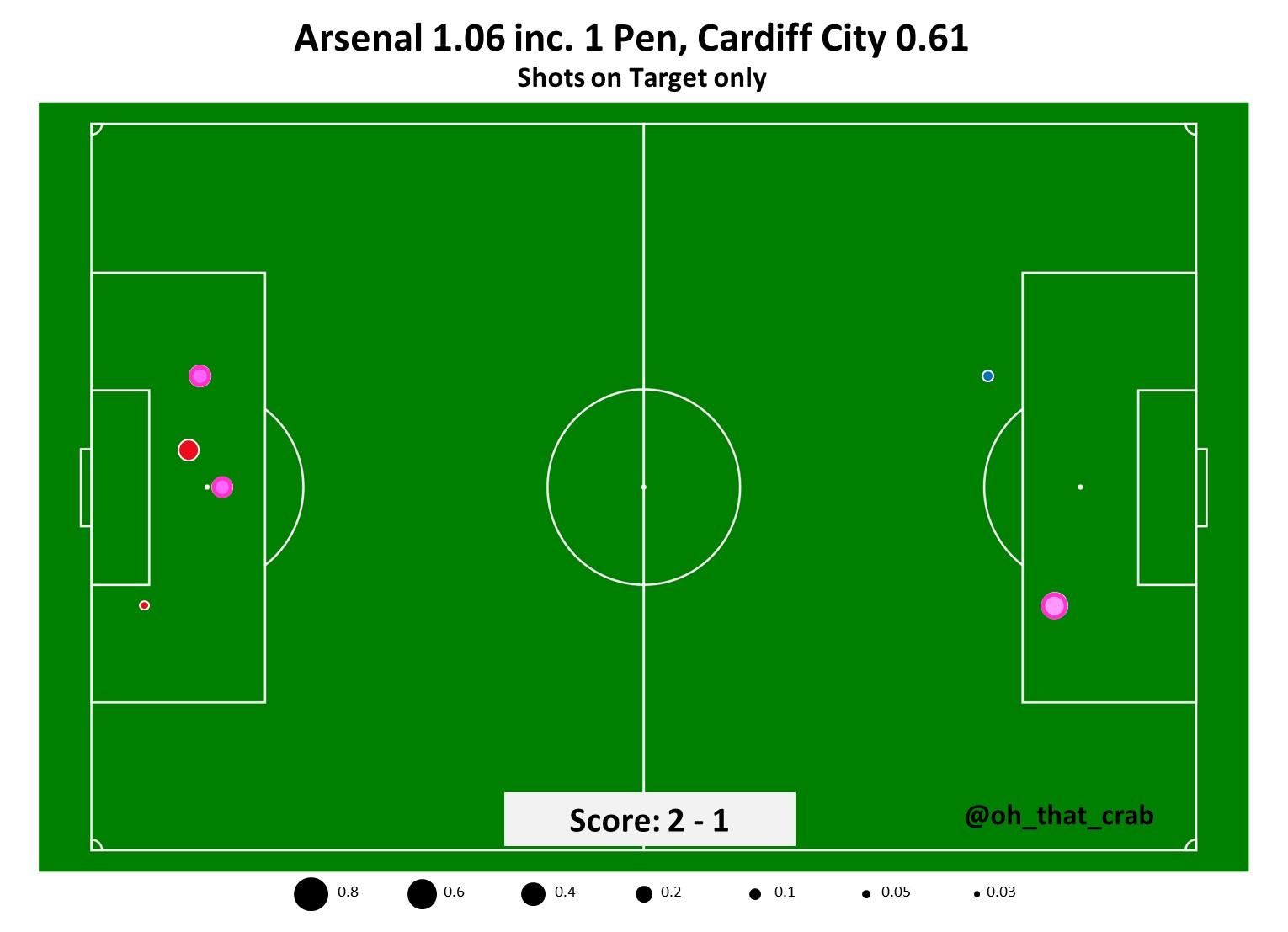 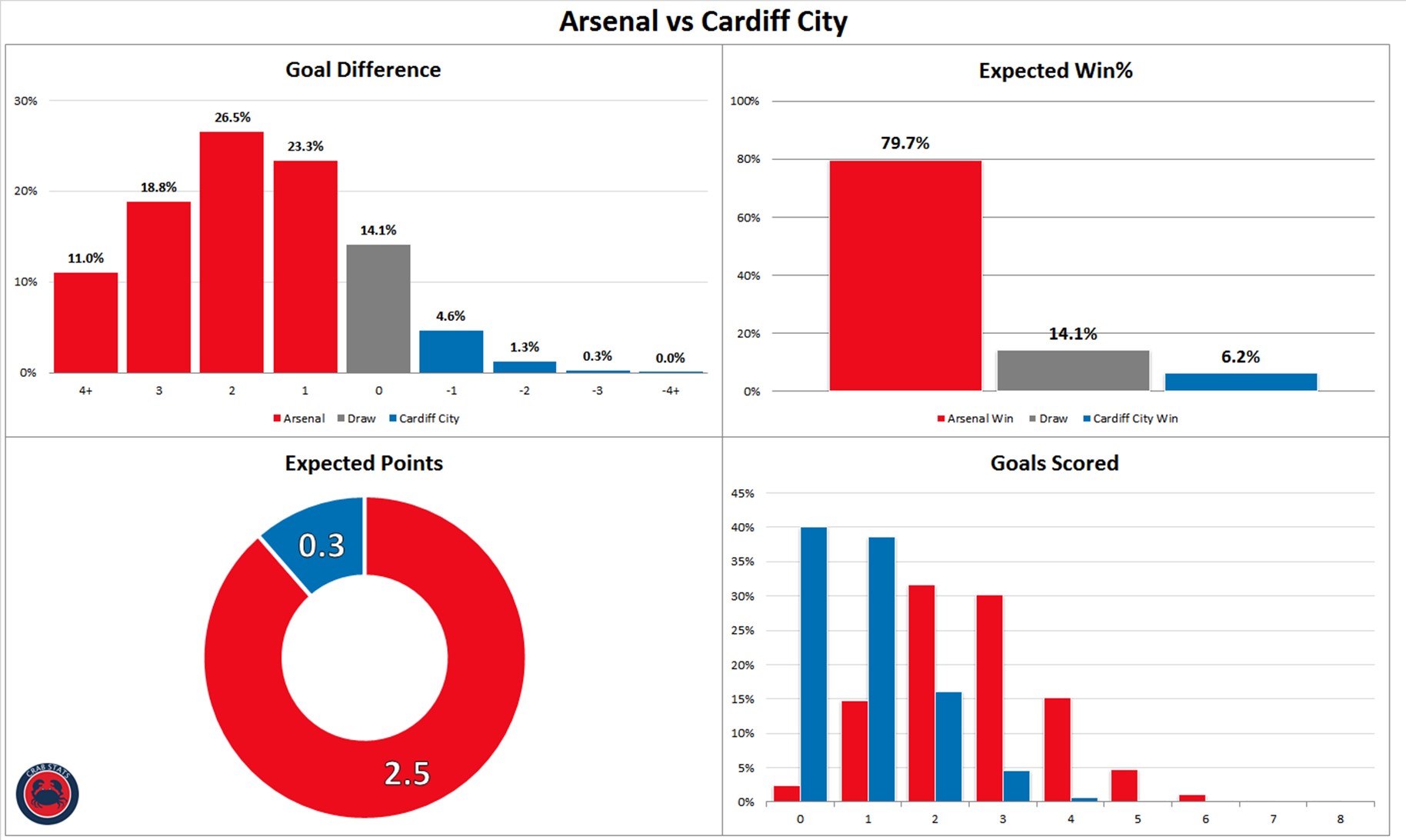 Arsenal 2-1 Cardiff City: By the numbers

46% – The percentage of League matches were Unai Emery has made a half time substitution.

While it was nice to see early in the season that Unai Emery wasn’t afraid to make changes and that if a player wasn’t up to standards he would be at risk of getting pulled at halftime. As the half time substitutions have piled up, it is starting to feel less like Emery is showing flexibility and instead fixing his own mistakes that he made in the initial team selection. That brings up to the player taken off…

1 – Shot, from outside the area and blocked

3 – Tackles, tied for the lead in the first half for Arsenal

I don’t want to come across as negative against Elneny, but this wasn’t really the game and role to bring out the best in him. Elneny has strengths, he has amazing stamina, he is a good (albeit safe) passer and doesn’t shirk his defensive duties. These skills however doesn’t really put him as the best option among Arsenal midfielders, he isn’t as good a defensive midfielder as Lucas Torreira, Matteo Guendouzi looks like a better box to box type player and Granit Xhaka is a better deep distributor.

Specifically in this match against Cardiff, with Arsenal controlling so much of the ball, having three midfielders on the pitch made less sense than it would against other teams. Elneny was the obvious choice to sacrifice but I would place the blame more on the manager who started this match with a very conservative approach again against a bottom table team.

One of the most obvious things in this conservative approach was that Arsenal lacked the ability to connect defense/midfield with attack.

5 – Final third entries by Mesut Özil in the first half

Without Granit Xhaka, the other Arsenal midfielders struggled to move the ball forward in this match. That left Mesut Özil to drop deep to be able to get on to the ball and help progress the attacks. This caused a cascading issue where if one of the three Arsenal attackers was dropping back one of Alexandre Lacazette or Pierre-Emerick Aubameyang had to fill the vacated space of Özil leaving even less options in the box.

This issue went a long way to explaining why Arsenal lacked much attacking thrust in the first half and why Alex Iwobi coming on provided balance as there was another option to both progress the ball too and another player comfortable dropping deep to help the midfielders.

1 – Yellow card given for a dive after being fouled

Lacazette couldn’t buy a call in this match against Cardiff City. Here is the first uncalled foul: 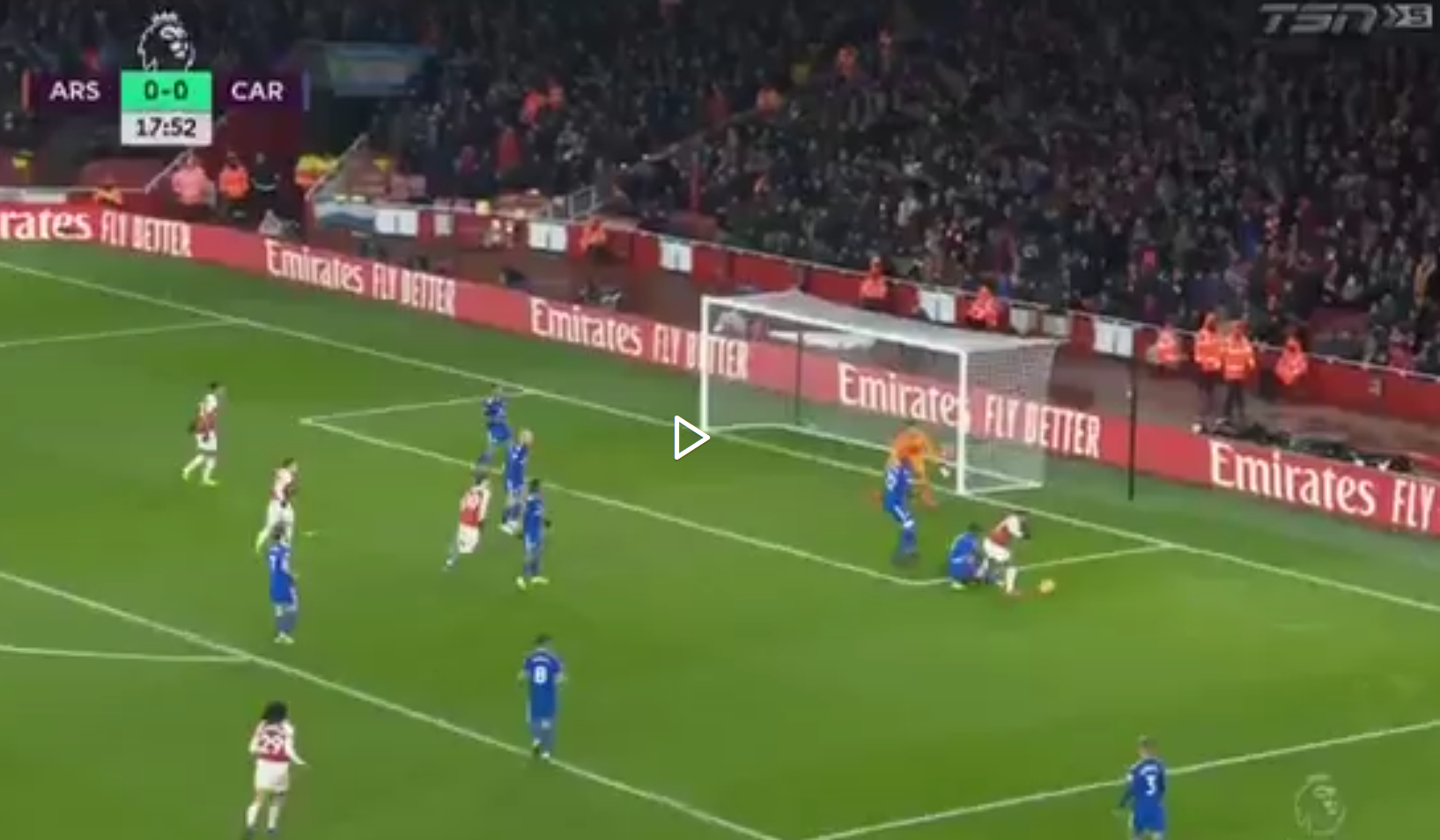 Pretty obvious that he back leg is trapped stopping him from getting to the ball, he even stumbles as he breaks free. Mike Dean tho. This is pretty textbook on why players dive and play up contact for fouls in the box, being honest doesn’t earn you much from referees.

Here is the second uncalled foul: 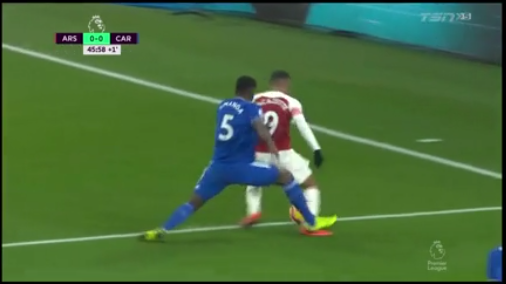 He does actually go down after this one, this is probably a harder one to see from Mike Dean’s angle and one of the reasons I am amazed that football tries to cover this big of a field with just three officials.

Here is the “dive” that got him a yellow card: 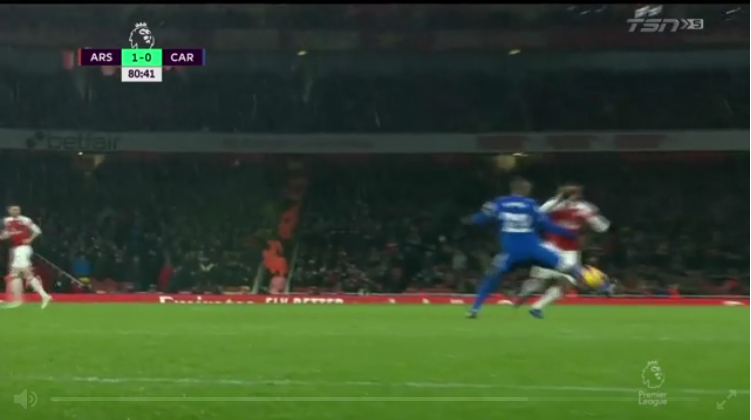 There is contact in this duel, I can see this as a no call possibly but to give a yellow for a dive is really baffling. Again, that’s Mike Dean for you.

After these bad calls, I am very happy that Lacazette got his really well taken goal that again came after a foul that Mike Dean didn’t seem interested in calling (he didn’t indicate that he was playing the advantage in that situation).

The Mike Dean Travelling Roadshow continues. The strange thing is that despite the fact it’s all about him and he doesn’t seem to like us we have a pretty good record when he is in charge.

Lacazette looked positively angry at that point. Was entertaining in the end since he scored, but I felt bad for him.

Like Wenger said, Mike Dean is not honest. He shouldn’t referee out matches but that’s another matter.

One thing Mike D does is, unite the Arsenal fan base. It’s an unanimous view of the millions that he is a count!

Stats…its what they want you to see. Elneny was useless. No mention of critical block from Mustafi then not to mention when he blocked Niasse cross when Monreal got his offside positioning wrong. No mention say of Monreal making two dodgy tackles which with Mike Dean could have easily ended in tears. No mention of Iwobi’s out put in recent matches. This is the second critical pass from the left in the last two matches leading to a goal. Nor has it been coincidental that all our attack funnels from left. or if you want a more popular player to… Read more »

Maybe you should ask for your money back.

Stop being so ungrateful and have a little respect.

Did you read what he wrote?

He said Mahrez would have looked great out there lol jk

Honestly he said UE went ultra conservative against a weak opposition. He didn’t say ME should have stayed out there. It’s becoming painfully obvious UE makes bad lineup choices to begin with. At first it was refreshing but now it’s become his thing.

Why the PL continues to believe that a single middle-aged man can call a game accurately without the benefits of modern technology (and nearly every other major sport proving the technology works for you at no cost) is where the true fault lies. But I guess when pretty much every pundit and football authority not only defends diving but praises the act (especially when Kane and company do it), the desire for the “right call” to be made just does not run deep enough to warrant change. Thank you to Scott for a very balanced breakdown of the game stats,… Read more »

sp*rs and Chelsea are losing while Liverpool are drawing right now. If the games end this way, Arsenal will be the only top 6 team to win in this round.

So you’re the guy that jinxed it!

What I have noticed about Mesut’s game in the last 2 and a half seasons, is the subtle change that has come about because of the loss of Santi Carzola and Mikel Arteta. Ozil played further up the pitch when those two players played for us. They where the players who dropped deep to collect the ball from the centrebacks and progressed the ball upfield, through dribbling or combination play. The loss of Arteta, who was better defensively than Santi, was able to cover for Ramsey’s running and was also helped by the fact that Ramsey was matching Arturo Vidal… Read more »

I dunno, I still have no issue with the half time subs. He’s still in his first season with us and dealing with a real lack of balance in the squad. Emery made a sub, that sub played the pass that led to the penalty and we won the game. Whether you think it’s fixing his mistakes or being pro active really just comes down to perspective. Regardless, I’ll take it over what’s going on at chelsea.