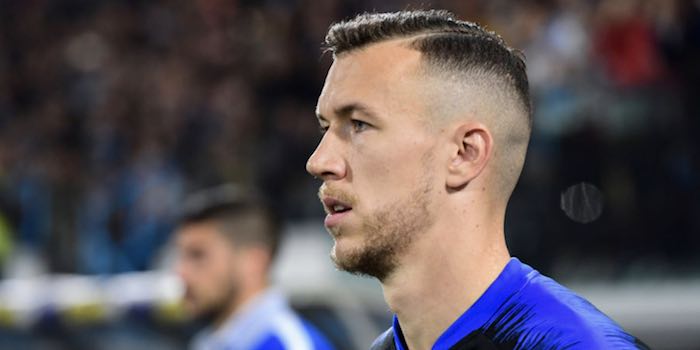 The news of his arrival was confirmed by David Ornstein who also revealed that Arsenal are still chasing another signing on top of that one.

In a BBC article, he says that Ivan Perisic and Yannick Carrasco are the two players we’re looking at.

The former seems most likely as Inter Milan are open to his departure, again the sticking point appears to be an obligation to buy the player, whereas Arsenal only want an option.

The Belgian international, meanwhile, signed for Chinese side Dalian Yifang from Atletico Madrid last year and is earning a very large wage – and the chances of us matching that as well as paying the kind of fee which would see them recoup some of what they paid for him seem very slim.

And in news that will surprise nobody, the club are not looking to make a defensive signing in spite of the absences of Hector Bellerin and Rob Holding for the rest of the season, and that of Sokratis who is out with an ankle injury for another month.

The only logical explanation is that we have summer targets in place who we see as genuine upgrades but who we can’t bring in this month.

Thank you. And haha.

I don’t have anything against Perisic, but unless its the rumored swap deal involving Ozil (unlikely) I really don’t see why we would want to buy another almost 30 year old for a high fee & on very high wages. Our wage bill already is far too high and at the rumored fee of 40m – I would rather just wait until summer to buy a younger player.

Everything I’ve heard is a loan with an option to buy on Perisic. Inter want it to be a guaranteed buy or buy if we use him x number of times or qualify for CL, but we just want loan with Option.

No way Ozil will agree to go to Inter on a swap with Perisic.

Hence we’re opting for a lone with an option to buy. Short term fix for a long term gain.

The strategy may be to bring Perisic in now to help our campaign for a CL place, and then deal with the other 30+ year olds in our squad in the summer. Mkhytarian and Ozil in particular could face the axe.

Why can’t we fucking having Perisic, Ozil, Mkhitaryan, Laca and Aubameyang in the same team? Why does it always have to be Ozil out or Mkhi out? City for example have Aguero, Jesus, Sane, Sterling, Mahrez, David Silva, De Bruyne and Bernardo Silva. I don’t see their fans complaining. I see Perisic as an upgrade on Welbeck and Denis Suarez as a squad player. If Suarez does well then we are probably done with offensive reinforcements for next season. I think the club are also doing the right thing wrt to CB situation. We must have some serious targets in… Read more »

“Why can’t we fucking having Perisic, Ozil, Mkhitaryan, Laca and Aubameyang in the same team?”

In a word, wages. We have one of the largest wage bills in world football but no CL dosh for the last couple of seasons and a somewhat absentee owner, so we’re bumping up against the Prems financial fair play rules. Needless to say, we don’t have City money!

I think I read somewhere that the 17 million pounds it cost to pay off Arsene and his cronies was put on the wage bill, which would explain a lot. Does anyone know if this is true?

Cronies? Have some respect ffs. It always costs alot to switch management, more so than money – time. Takes ages for new management to settle, just like players.

17million for Wenger et al would be fine, after all what he has done for the club – financially

Never seen Perisic play but there’s a deadliness about Carrasco. He’s an executioner. Would love to have him.

Players who move to China aren’t in it for the passion.

Ferreira-Carrasco’s move to China was a bit more complicated than that.

The billionaire Wang Jianlin bought a 20% stake in Atleti about 5 years ago. His property company Dalian Wanda Group also sponsored Atleti’s new stadium (which is why it’s called the Wanda Metropolitano), and they own the Chinese club Dalian Yifang who Ferreira-Carrasco was sold to.

It’s a bit messy but both him and Nico Gaitan “took one for the team” and moved to China together, and Atletico got 50m euros and headroom to massively increase Griezmann’s wages because Barca were desperate to poach him.

That’s sad for them. Carrasco is a decent talent.

I am sure he wasn’t all that sad considering he must have had to agree. Plus he gets a nice little retirement fund by going to china for a couple of years.

We only have for Eboue
Reply to  Giroulski

Wait, what? What about the World Cup?

Carrasco on the wing. Fiasco at the back.

Recently, Fiasco has been one of our most consistent defenders

I had Fiasco got injured, glad we managed to sign Shambles

Seems to be there every game! Surely needs a rest by now…

It all makes sense as our new formation is going to be 2 1 7 until we buy some defenders in the Summer. Should see some goals!

Lol, like they say: Attack is your first defence. Is it true for us though?

With that logic, wouldnt we need defenders to play in attack?

Guys watch this:
https://youtu.be/TZGylBqnmyQ
Opened my eyes about why we only seem to be doing loan signings this January.

Peresic earns 100k euros same as bellerin and less than kolasinac. This issue about 30yr old players earning pennies is just hogwash. Is he an upgrade kn the wing? I believe so. Will he twice as much as he’s getting? I don’t think so. Let’s get him and see where he takes us

Not very excited by the thought of Suarez.
Just another average player – we have more than enough of those…

In other news, Medhi Benatia sold for 10m…. TEN MILLION & AS Monaco which are fighting relegation signed Gelson Martins ON LOAN.

I would happily take two of them right now… But I guess our budget is tight, right?

But Benatia has gone to Qatar. In all probability, he took the hit (in terms of footballing ambitions) for a bigger wage, the kind we wouldn’t have doled out for him.

I agree with ya, but the thought of having Mustafi as our main CB is actually petrifying.

Shambles at the back.
No creativity up front.
I thought appointing a new manager was meant to improve things – not make them worse.
I am not very impressed with Emery.
I cannot see him staying very long at Arsenal.
Of course, I would love to be proven wrong…

I kind of agree with your comment that I thought, the new manager would bring some new style of play, but what I see is Wenger’s old style. Here is what is wrong with the team right now, Iwobi is too naive to start and play full game, Ramsey has not change for the past 9 seasons, he produce nothing. I am glad he moved on to another club. Xhaka is too slow to play his position, I take Elnany ahead of him any day. They should have kept Ospina, a much better choice than what we have now. It… Read more »

Carrasco/Perisic both make sense as a replacement for DANNY WELBECK

Having summer plans shouldnt stop us from making a loan deal for a defender. Decent player on the fringes of a top team that can help when needed.
Oh well, hope Mavropanos makes a real impact.

That would be a decent window.

These players have motivation to move now. May not be the case in the summer +we will face more competition then and it may be further complicated by lack 0f CL

I think Unai will push his weight to get the right thing done now.

There’s too much wavering and dead ends with Bailly or Perisic.

Hope we get it over the line now.

Carrasco : I thought in the summer he was a potential dark horse for us.

There were other potentials in Lozano, Neres, Thauvin we could have moved

As is we neglected to bring in a wide player to fulfill a need outstanding for 2 seasons standing.

I think the gaffer is pushing now.

Carrasco will be a better prospect than the aging Perisic.

We lack players who can technically beat one or two players, engage and pull defenders out of position.

We use to have Wenger gem Santi.

Dennis (and potentially Carrasco) will help us transition quicker but also hold the ball better with less need to passing lanes.

Carrasco would be a serious upgrade on our offensive play, that in the end will reduce the moment our defenders are put to task.
Having him and Kolasnic on the same side would terrorize any team