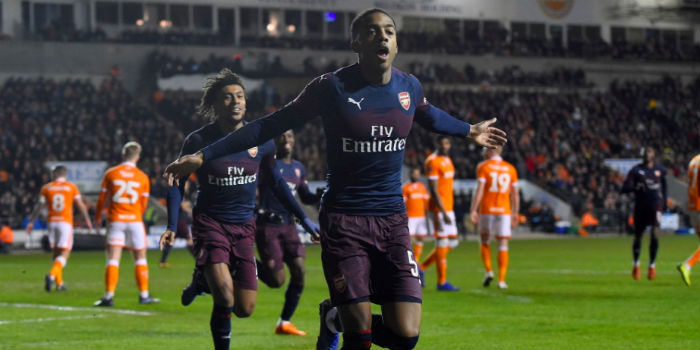 Arsenal eased into the FA Cup fourth round with a 3-0 win over Blackpool at Bloomfield Lane.

Young midfielder Joe Willock stole the show scoring twice in the first half before Alex Iwobi rounded things off from close range with nine minutes remaining.

Unai Emery was forced into a late change after Laurent Koscielny complained of a back problem in the pre-game warm-up. Having already had to contend with a Blackpool fan delaying our trip to Bloomfield Road by staging a protest against his club’s owners on top of our team coach, it wasn’t ideal. Carl Jenkinson came in at right-back meaning Stephan Lichtsteiner partnered Sokratis in the middle with Sead Kolasinac on the left. Ainsley Maitland-Niles went to right wing, while the inclusion of youngsters Joe Willock and Eddie Nketiah reflected the boss’ eagerness to rest up his attacking big hitters.

As expected the two sides stepped out into an eerily empty stadium. Arsenal’s 5,200 travelling supporters dwarfed the home contingent who continue to stay away in the hope of tightening the screw on much-hated owner Owen Oyston. He watched from the stands in sunglasses and cowboy hat, looking every bit the creepy octogenarian villain that he is.

Both sides had great chances to break the deadlock inside the opening seven minutes. Nketiah, twice, had gilt-edged opportunities from Maitland-Niles passes. His first effort hit the side-netting, his second went wide. In between, Cech had to deny Armand Gnanduillet after he’d danced into the box under no pressure at all.

We didn’t have to wait too long before we did finally grab a goal. Ramsey’s free-kick, awarded for a foul on Nketiah on the edge of the box, was deflected onto the post and Willock reacted quickest to head the rebound into an empty net for his second goal of the season. (1-0)

There was a real ebb and flow about the game as both sides played expansive football despite the terrible playing surface. The home side, sniffing nervousness in our mix-and-match defence, played their fair share of long balls in Cech’s direction but we just about dealt with the aerial threat.

Up front, we always looked capable of scoring. Iwobi and Jenkinson both squandered chances before combining, with the help of Nketiah’s heel, to set up Willock who doubled the lead with a close-range tap-in on 37 minutes. “He scores when he wants, Joe Willock, he scores when he wants” joked the chanting travelling fans. (2-0)

A frustrating half for Nketiah ended with him missing a third glorious chance. This time keeper Mark Howard preempted his sidefoot effort to make a decent stop.

Blackpool were bright in the opening 15 minutes of the second half and should have reduced the deficit only for Michael Nottingham to blaze over with the goal gaping.

Having looked relatively composed, our defence decided to have a wobble. A couple of crosses had Elneny and Iwobi swiping at thin air and Cech caused a minor panic when he changed his mind about taking on an attacker who was closing him down. The veteran just about got the ball away from danger.

Nketiah, who barely had a kick after the break, was replaced by Lacazette and the home side had to change their keeper. The replacement took about five minutes to put his gloves on.

We seemed content to coast our way to the final whistle before a late flurry of action. Willock thought he had a hat-trick when he converted a Kolasinac cross but he was flagged for offside. Iwobi did grab our third when he put into an empty net after a Ramsey shot was blocked. Replays showed the Nigerian was offside. (3-0)

Iwobi really should have had a second two minutes later but he took an age on the ball when put clean through on goal and then produced a tame effort. Confident of victory, Emery sent on teenagers Zech Medley and Bukayo Saka for the last few minutes. Ramsey might have added a further gloss to proceedings in stoppage time but he couldn’t get the ball past keeper Mafoumbi who came rushing out of his area to clear.

All in all, a solid evening’s work by the lads, who’ll find out their fourth round opponents on Monday.

You have got to hand it to Jenk, he had a great game today and he’s a top top lad.

He put in a shift today

His crossing is awful but he works hard. He overlaps well. Has a good engine too. Decent performance.

Think you might be talking about Bellerin there. Jenko’s crossing is excellent, and was right on the money today.

As i’ve pondered before on this forum…. what on earth does the boy have to do to get onto Unai’s radar???

My only issue (if any) is he doesn’t stop the crosses coming in, he stands off by a few yards which is an easy word in the ear type fix i imagine. Definitely better than Lich…dear oh dear, cant be too harsh look what he’s achieved in his career but unfortunately he didn’t come to us like Dani Alves or Pirlo with an extra year to give.

I agree. I didn’t watch 2nd half but first half there was a couple of moments where he came across to their winger but stood like 2 metres off and allowed crosses to come in. Seemed slack and dangerous. Couldn’t help but think better players would punish him for allowing that kind of space.

Still, he has a great engine and I’d be inclined to give him a few games ahead of Lichtsteiner

Yep, he’s coming back into himself. Last season it looked doubtful that we would see him play for us again. But here he is, covering a lot of ground and passing with imagination. A big plus.

Emery quite knows everyone (or the most of us) is desperate to see Saka: Emery opts not to play Saka from the off in the only competition he can expect to play in for the season’s remainder…

Happy for Willock and Iwobi

Decent and pro performance. Well done all (and we got a clean sheeet :))

Willock man of the match. Lichtsteiner should never play for us again!

That guy is worse than finished!

Comfortable win against a rubbish Blackpool side. Nketiah awful: should have had a hat trick. Iwobi Jenkinson and Ramsey star men. We should have had it won by half time but made hard work of it. Nice to keep a clean sheet.

Pretty much agree with that, though Nketiah wasn’t awful so much as toothless. It was good to watch him test the albeit sluggish Blackpool defence

I still think AMN is more than a fullback

Yes I agree, but in my opinion our new, frequently used formation with 3 CB’s and 2 wingbacks are also very well suited for both of them.

I have wondered for sometime will AMN’s speed be somewhat wasted in the middle of the field versus playing on the edges.
Maybe he is a winger? Thoughts?

Well done to the youngsters!

Flash
Reply to  my name is bob

Well said! With Rambo leaving our so called Brittish core are basically gone…
But with Bellerin, Torreira, AMN, Guendouzi, Nelson, Iwobi, Holding a new but solid generation seems to be rising again…

Decent performance on a potato field. Taking Jenkinson over Lichtsteiner any day im the PL. Impressed of Ramsey who work hard even in this type of match and on his way out. Will miss him. Not so impressed over us needing to do last ditch defending against a League one team. We’re capable to do defensive errors against all levels of teams.

Can we pleaseee play Jenk at RB if needed?
I promise he won’t be worse than Lich.

Very weird game, good scoreline but hard to watch. Our best were rested so totally understand Emery’s thinking but, that was the single worse Arsenal defensive line up I’ve seen for years. Poor Blackpool suffering at the hands of a total twat who looked like a 1970’s TV villain, epitome of the failed actor and slimy estate agent he is, are in full boycott mode. Because of the boycott what would have been a great noisy potential giant killing affair was tame and quiet. Willock MOTM got two and almost three, Eddie should have had a hat trick but in… Read more »

Avoided the banana skin which started the real Wenger out spiral at Forest last year. The main problem is that this was the best back 4 which we could put out and, even allowing for their lack of game time together, was a shambles.

Fabregas is going to Monaco, maybe he can get some love again, oh, he missed a penalty…