This was a pleasant weekend of results for an Arsenal fan. Arsenal were convincingly better than Southampton. Liverpool dropped points cutting their lead at the top of the table. Sp*rs lost in just about the most hilarious way possible at Burnley. Manchester City had to play 120 minutes to lift the League Cup. Lastly Chelsea, well if you don’t know what happened there, take a few minutes and go search it out. It is worth it.

At the end of the week of matches, Arsenal are in 4th place and it feels like home.

Arsenal 2-0 Southampton: By the graphs 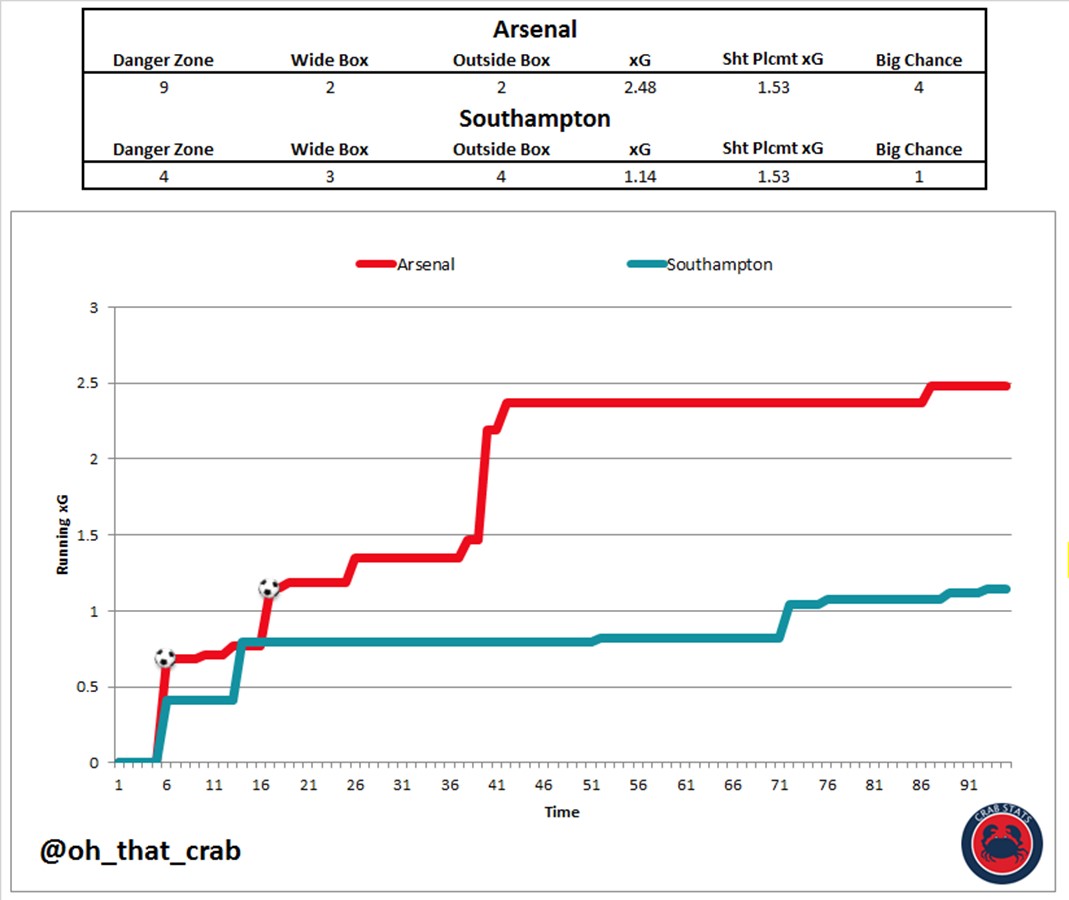 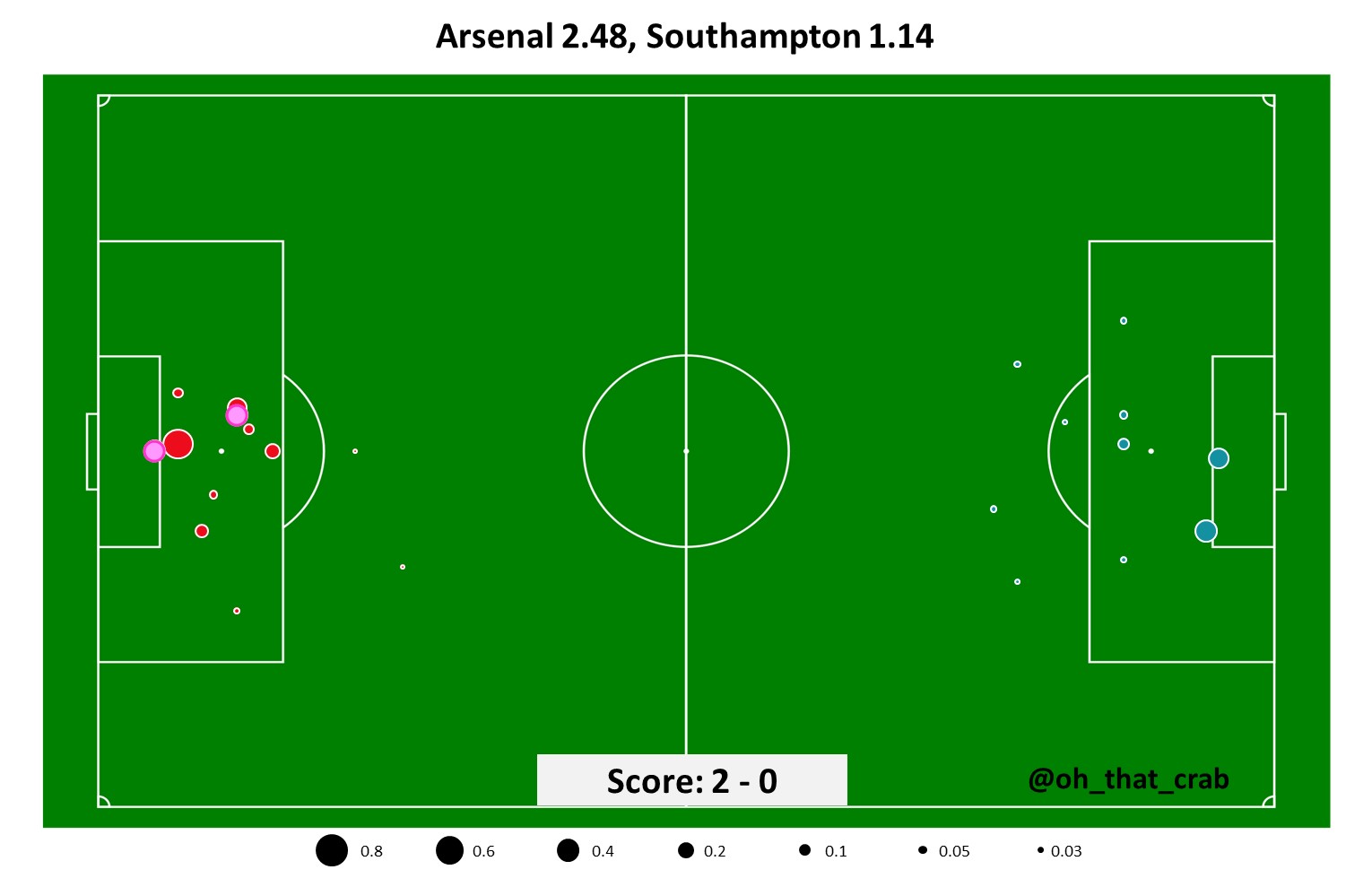 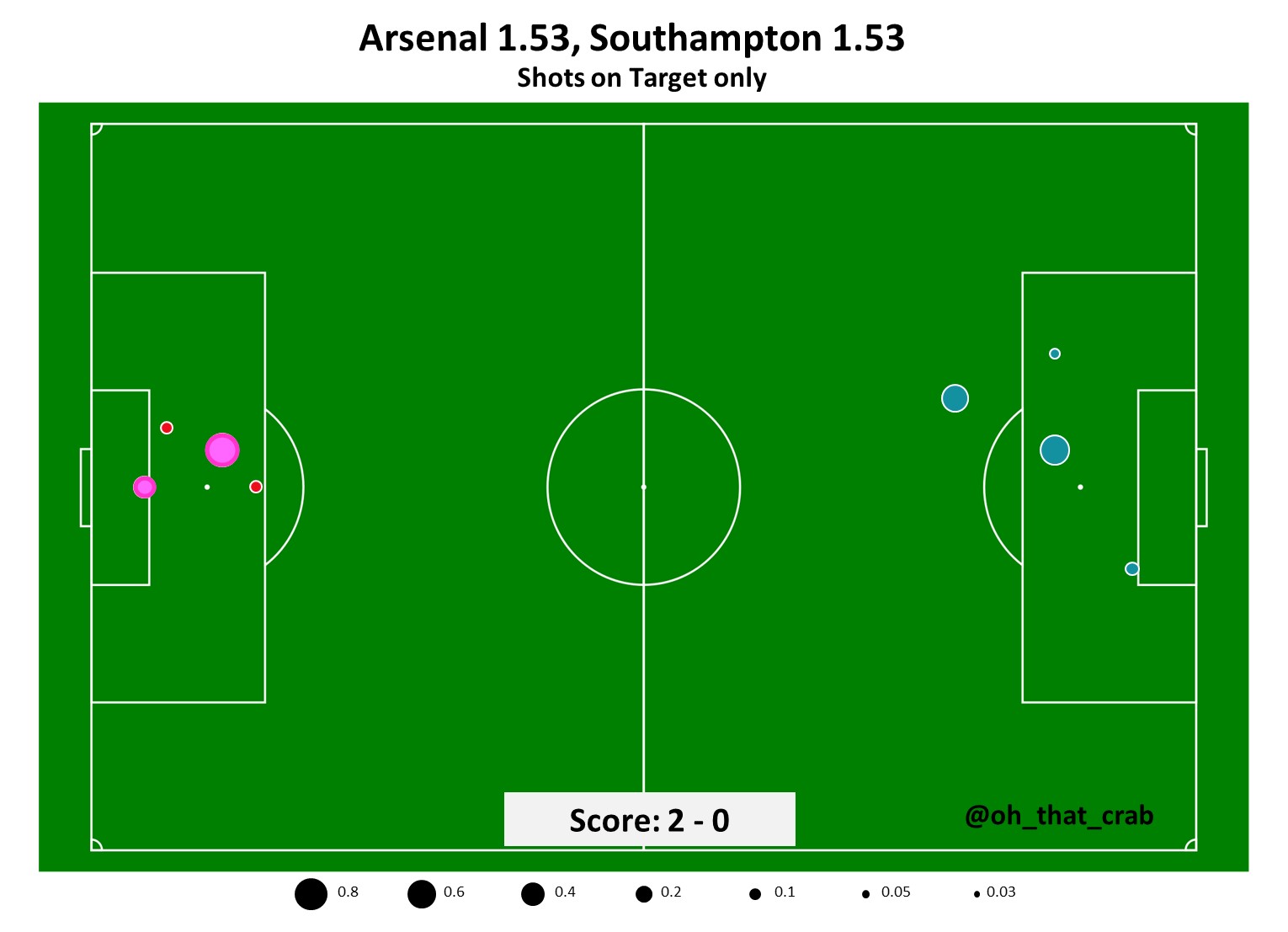 Simulated match results based on shots 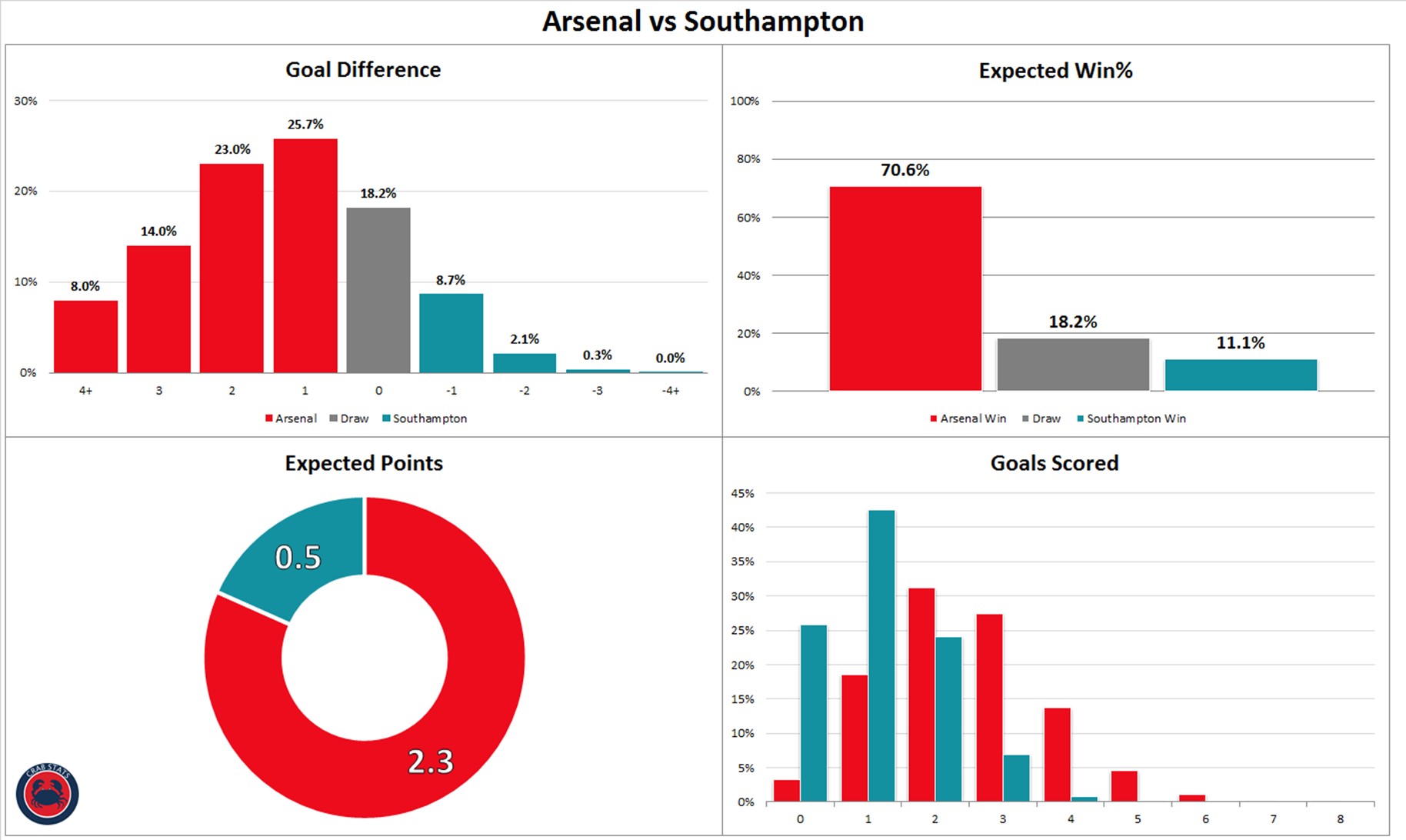 Arsenal 2-0 Southampton: By the numbers

4 – Saves by Bernd Leno against Southampton

1.5 – Shot placement xG Saved by Leno. This measure takes into account where and how the shot was taken, and where in the goal frame the shot ended up to calculate a post shot xG model.

1.4 –  Shot on target xG saved by Leno. This is similar but a bit dumber as it only looks at other shots on target from that location to see what they are historically converted at and doesn’t take into account where in the goal the shot ended up.

64.3% – Pass completion percentage against Southampton. Looking at my expected pass completion model his passes today would be completed at 70.2% for an average player that made the same places from the same starting position and same ending position.

93.3% – Medium pass completion percentage against Southampton (Passes between 15 and 35 yards)

I haven’t had much time to write about Bernd Leno this season. I can’t really say that he has had any amazing matches, nor has he had such a bad match that it sticks out in my mind (let me know in the comments if I forgot something). I think that this match might rank as one of his best for Arsenal but I can’t help think that for what was promised it leaves me wanting more.

I don’t want to come across negative because in this match he made some very good saves and really earned his clean sheet. Yet, while saving shots is obviously a very important part, (Really the most important outside maybe a couple clubs that do such a good job suppressing shots that it isn’t a major issue. This doesn’t describe the current Arsenal team.) one of his big selling points was that he was a very good distributor with his passing and I think that this has been the area that has left me the most disappointed this season.

He hasn’t had any obvious mistakes trying to build from the back (again remind me if I have forgot something) like Cech did but he also seems to be going long a lot more than Cech did early in the season. The stats say otherwise, with Cech averaging a pass length of 32.8 yards vs 31 for Leno but with his reputation and the emphasis on building from the back I really expected more from his passing that hasn’t quite materialized.

All things considered, Leno has been a fairly solid addition to the team. He isn’t a world beater of a keeper that will propel Arsenal to several spots over what the shots allowed would suggest but he seems like a very solid keeper that while not the greatest, isn’t a major whole that will need replacing in a squad undergoing a rebuild.

8 – Passes completed into the box by Alex Iwobi, led all players.

I am going to go off my beat a bit and veer into tactics. I very much think that being able to understand stats, you have to have at least some grounding in understanding what it is that teams are looking to accomplish.

Watching Arsenal over the last couple of matches where both Iwobi and Mkhitaryan have played together you can see that these players are very comfortable in the wide forward roles that they have been asked to play. It is pretty obvious that these are positions that are much more natural for them over some of the other Arsenal players who can “do a job” out wide.

I have been pleasantly surprised with Arsenal’s play with the two of them in the team. It isn’t exactly peak attacking Arsenal but having player comfortable in the wide roles makes the 4231/433 work so much better.

Both players have the ability to facilitate, create and get on the end of moves and that is a key for playing in the wide areas and helps to relive the burden on the overlapping fullbacks to create offense from wide areas.

48 – The points that Arsenal are on pace for at home (technically 47.5 but you have to round that up).

44 – The average points that Arsenal have collected at home over the last four seasons.

19.1 –  The Average expected goals allowed by Arsenal at home over the last 4 seasons.

I don’t have an answer to why this is the case. I don’t even have a guess as to why there is that big of a gap between home and away form. It is normal to be better at home but the split between the two has grown so large and persisted for so long that it is starting to look like there might be something beyond chance and home field advantage to explain it.

Hopefully Arsenal, with their much larger staff can pinpoint the reasoning for these splits.

Sources: Opta via Whoscored, StatsZone and my own data base. Understat for the data on expected goals for the last 4 seasons.

Arteta explains keeper choice & how kids can get more games

Was great seeing some of that passing at times in the first half.. Would be great if we could replicate some of that home form on the road.. But it was great to see a bit of confidence all round too

One important thing about Leno is i dont think he will refuse to be substituted. Always a good quality for a GK to have.

Watching the matches it appears that some of our back players are not good enough to handle short passes out and on many occasions the ball is then passed back to Leno. It may also be because the midfield are not making themselves available.

Having said that Leno does sometimes send out a suicide short pass and his long ball distribution seems to find the oppo regularly unlike Ederson at City.

End result is that we need to work on it to get the fluency that some teams have to move the ball out effectively.

I like Leno. He’s been hung out to dry at times this season, by some shambolic defending, but is generally fairly dependable. He’s still quite young and some of his weaknesses (flapping at crosses) can be ironed out. As for distribution, sure it would be nice if, when he has to boot it long, it would hit our players more, but we don’t exactly set up for the long ball. One of the main things about “ball playing” keepers is that they have the confidence to play passes under pressure, which he has. I don’t remember him losing the ball… Read more »

The funny thing is that a few years ago, we were more comfortable playing against sides away than at home because of the opponents propensity to sit back at the Emirates and come out more on their home pitch. The last two years though have been defined by the improvement in the squads of the mid to lower table teams, and they have more tactically astute managers as well. We have also had to put up with players giving up on Arsene and it shows in how pronounced the gap in performances between home and away has been, in that… Read more »

I think you make some really good points about tactics and the improvement in the overall quality of teams below us in the PL, but I think what has destroyed Arsenal’s away-form the most in the past two seasons is the fear of losing, and that negates the freedom and confidence we need to play our game well. As the club has slipped down the ladder, there is an ever-present feeling that we are not where we are supposed to be, and the current climate is overcharged — one impressive win and “we’re back,” one unimpressive loss and “we’re finished,… Read more »

I had not read your post when I posted above, and I think your statement that this season “has been characterized, tactically, by a lack of belief in the ability of our own players” is exactly right. I am not sure that players downed tools away last year, at least not consciously, but of course uncertainty about Wenger’s future and the resulting demoralization would be more likely to show up in players’ form away rather than at home.

Thanks again for your stats, Scott. Much appreciated.

Might it be possible, in the future, to provide a few of the general stats like pass completion stats for other players and players who led the team or both teams for certain stats too?

The 44 “average points that Arsenal have collected at home over the last four seasons” understates the enigma, I think (not intentionally). Last season on home results alone, we would have finished a close second to Man City’s stunning 50 points–and, as I recall, eleventh on away form. Some of the answer, of course, is the usual advantages of a home side: the impetus of the crowd and the related unconscious bias of the officiating. But, in general, decent home sides are forced by the expectations of their supporters to play more aggressive, attacking football at home–and the resulting more… Read more »