THE LOWDOWN
Arsenal face Manchester City Women in the Continental Tyres Cup Final for the second consecutive season. Last year, the Gunners won 1-0 thanks to a first half goal from Vivianne Miedema. The sides also met in the 2014 final, which City won by a goal to nil. It looks set to be another tight encounter between the WSL’s top two.

Both Arsenal and City clearly had the game on their mind during their midweek WSL fixtures. City rested players and trailed lowly Everton 1-0 at half-time on Wednesday, before winning 2-1. Arsenal, meanwhile, took 60 minutes to break down bottom of the league Yeovil at home. Both sides had a bit of an eye on Saturday’s final, it seemed.

City have a cleaner bill of health than Montemurro’s side and a bigger squad, while Arsenal remain injury hit. City were able to capitalise on the absence of Jordan Nobbs and Kim Little when the teams last met in Manchester in December, with City winning 2-0 thanks to a brace from Georgia Stanway. Nobbs will remain sidelined until early next season, but Kim Little has since returned, scoring twice against Yeovil on Wednesday.

It will more than likely be a tight game decided by small details. In Vivianne Miedema and Nikita Parris, the WSL’s foremost goalscorers will be on display and they will have a big hand in deciding who hoists the trophy. With Stanway and Parris, City pack a considerable punch on the counter. But in Little and Miedema, Arsenal have one of the most formidable attacking hubs in world football. Don’t be surprised if this one goes to the wire.

For a further lowdown on the game, why not check out the inaugural Arsenal Women’s podcast, in which we preview the final with Gunners centre half Leah Williamson.

TEAM NEWS
Injuries continue to plague Arsenal, who will check on the fitness of defender Emma Mitchell, who was not fit to play against Yeovil on Wednesday night. Jordan Nobbs (knee), Dan Carter (knee), Jess Samuelsson (foot), Lia Wälti (knee), Tabea Kemme (knee) and Viki Schnaderbeck (knee) are all unavailable.

? An update on @Emsmitch3’s absence last night ?@MontemurroJoe: “We just need to monitor her closely over the next couple of days, so hopefully she’s going to be alright for the #ContiCup final." ?#WeAreTheArsenal pic.twitter.com/PT7pzKEe5M

Lisa Evans came through her first start in 5 weeks against Yeovil on Wednesday after a knee injury of her own. Joe Montemurro needs to decide whether Pauline Peyraud-Magnin or Sari van Veenendaal will start in goal, the pair have rotated this season with Peyraud-Magnin preferred slightly more often. However, Sari played the quarter-final and semi-finals of this competition.

LAST TIME OUT
City defeated the Gunners 2-0 at the Academy Stadium in December, while Arsenal were 2-1 victors when the teams last met at Boreham Wood last May. But in last year’s final, Arsenal took the trophy home thanks to a first half goal from Vivianne Miedema at Wycombe Wanderers’ Adams Park. City won their last league game 2-1 at home to Everton on Wednesday, while Arsenal beat Yeovil 3-0 at home.

Click here to remind yourself of Arsenal’s route to the final.

PLAYER TO WATCH
Both teams have excellent players throughout the side, but it is difficult to frame this match as anything other than a shootout between the league’s top scorers, Nikita Parris and Vivianne Miedema. Miedema is on an appalling goal drought by her lofty standards, having not scored in her last 2 matches now.

Miedema was only 50% fit for last year’s final, but still turned a half chance into a gilt-edged one and won the game for the Gunners. In a game likely to be decided by razor thin margins, her clinical finishing and ability to fashion gold from finger nail dirt will be crucial to Arsenal’s chances of bringing home the trophy. 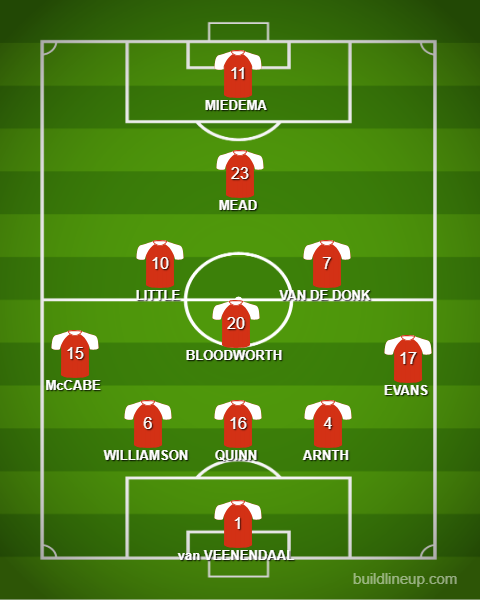 HOW TO CATCH THE GAME
The game kicks off at 1215pm at Sheffield United’s Bramall Lane on Saturday, admission is £10 adults for £3 children. The game is also being screened live in the UK on BT Sport 1. Arsenal are running coach travel to the match too.

? Booked your travel to the #ContiCup final this weekend yet? https://t.co/3opsIAJviA

Really hope we can pull this one off. For a while now (probably since the Nobbs injury) it’s felt a bit like we’re just clinging on to our early-season points advantage over Man City & Chelsea, with both having the better when the teams meet. While a loss wouldn’t be disastrous for confidence in the league, would be good to put down a bit of a statement with a win. As well as, you know, winning a trophy.

Come on you reds!

Yep, absolutely. Without Jordan we’re just trying to get over the line in the league. I really want to get it done before that City game on the final day!

In a sense the pressure is off for this game as only the league matters, and it would be wonderful (and quite possible given the international break offers time to get Walti, Samuelsson and potentially others fit plus we have less games ongoing given no FA cup interest) to get to the City game on May 16 with the job done. I can’t help thinking last weekend’s result against Chelsea, disappointing as it was, was a blessing in disguise.

I see the game tomorrow more as a test of the defences, so I make City favourites especially if Emma Mitchell is unable to play, or half-fit. (Just trying to shovel the pressure onto City ;))
We need to score score first, though, take advantage of their tendency to start slowly and then wind up. I have a hunch that they will come with a plan to stifle Kim Little, so players like DVD and McCabe might have to be the difference-makers for us.