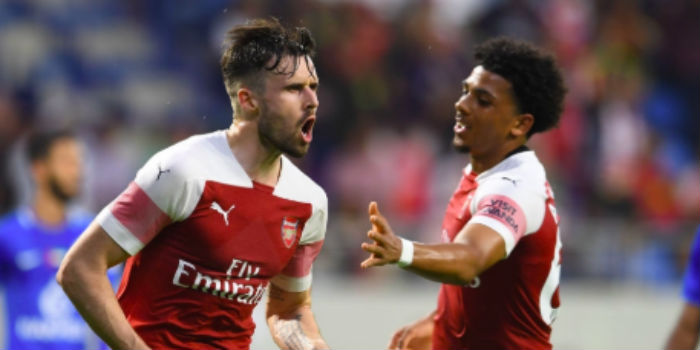 Arsenal have rounded off this week’s warm-weather training camp in Dubai with a 3-2 win over local side Al-Nasr at the Al Maktoum Stadium.

The Gunners starting XI – a mix of experience, youth and Mustafi – were pretty shaky in the opening stages as the hosts, playing with surprising intensity, forced us onto the back foot.

Bernd Leno made a couple of early stops to deny former Manchester City striker Alvaro Negredo, but he couldn’t do anything when Ronnie Fernandez curled home on 14 minutes.

The Gunners initially struggled with the hot conditions although Denis Suarez was a bright spark in the final third. Just before the break, it was the Spaniard who played a deft pass for Carl Jenkinson and the right-back found the net following up on his initial effort that hit the bar. Anything to push that Cologne own goal down the SEO rankings, eh Carl?

Unai Emery made five changes for the second half and it had an immediate impact. On 51 minutes, Alex Lacazette finished a flowing move that started with a burst by Ainsley Maitland-Niles and included a beautiful flick from Mesut Ozil.

Tyreece John-Jules extended the lead with 18 minutes remaining, calmly slotting home after stealing the ball on the edge of the Al-Nasr box and leaving the keeper on the floor.

A late penalty for the home side narrowed the gap right at the death, but the Gunners prevailed in the end, and hopefully return to England with a clean bill of health.

Emery: Arsenal wanted to give me a new contract

Good result, worth having a run out to keep us going over the Interlull.

Is it just me or are our academy players absolute units? I’ve never seen a crop of youngsters who look so physically prepared for the top flight.
Class of 2020? Can’t wait for the documentary.
COYG!

The EPL is the toughest and players need good physical strength. A problem with many of Wenger’s players was that while skillful
they weren’t robust enough and literally got pushed around by opponents.

Under Wenger, a lot of players while skillful were not that physically robust and literally got pushed around by opponents. It looks like things may be changing. Good news.

Is there a third way someone can say that?

That Laca goal was a thing of beauty

The commentator sounds like me doing a Mexican accent

That Özil assist ???
Mustafi doing what Mustafi does best ?

Nice to see most of the academy boys playing with confidence and purpose and very nice to see that level of performance from Suarez, every chance he can still be an asset for us.

John-Jules was cool as you like in front of goal! What composure from the youngster ?

Someone needs to have a word with Mustafi. I mean, that was the simplest of feints and the guy literally falls for it. If he was on his feet, he could have made the shot a lot harder to take. German defenders used to be one of the most reliable.

The word is “Goodbye”.

The initial ball into the box was also very easy to read. Kos would have intercepted before it even got to the guy

I say this: a win is a win, a friendly is a friendly, and Mustafi is a waste of space.

A win is a win, but let’s not get too carried away. Performances are probably more important in this kind of game than the result and there were some very good performances – and the odd one not so good, step forward Mustafi. We won’t get much for him – nothing close to the £35 million paid – but he should be the primary candidate for a transfer in the Summer (if someone will buy him).

I was going to say cirque du soleil might want him, but realised they have many skilful performers and no clowns.

Yes. I can’t help thinking that it would have been far simpler for Arsenal to pile up £35 million in notes the middle of The Emirates pitch and set fire to it.

Love Jenks, he scores a goal.

The highest point is watching Jenkinson score, quite amazing

Who else thought the alkhartoum stadium is fabulous

Exhibition match plus shop window and first team audition for some.

2) Back 4 again not ideal. Switch to back 3 worked better for us. Again those absolutist need take note. Nothing inked in stone. Dependent entirely on opposition faced and our own composition selection and availability.

3) Mavropanos. Swarmed the first half. Better with the extra Cback in back 3. Again difficult to assess as this is against Al Nasr and they don;t have as much depth either which means second half they are also weakened.

2) Jenkinson. Good goal. BUT reality is we are playing against Al Nasr. This is a shop window. When AMN came on, night and day. With Bellerin added, Jenkinson is out of his depth.

3) Pleguezuelo. Two rash challenges (one rewarded with a penalty against). Some good things going forward but again, difficult to see anything other than like Jenko, in the shop window at the moment.

4) AMN – Just solid. Giving us plenty of width, if not entirely synced up with Ozil but his recovery rate. Fantastic move to start the second goal for us. Plenty of pace power and skill in the ball. Should be in his ‘Natural Position’ at Rwing back and offering competition to fashion icon from Spain.

5) Ozil – Sumptuous flick for the goal. Plenty of involvement and showed quality roaming the pitch. He’s at his best again and there is argument to get him involved as much as possible in all the remaining matches behind the two strikers.

6) Dennis – A lot of movement today but still not entirely making enough of an impression as yet.

8) John-Jules – Another double barrel weapon in the making. He’s going to be pushing on Nketiah. Seems naturally confident and a well taken goal full of composure but the best stuff is the hustle to rob the ball off the Cback.

Again this is against Al Nasr so I’d temper some judgments. But a good work out and on to more important issues on Monday.

I always read your gigantic posts giving you benefit of the doubt. But i always regret it.