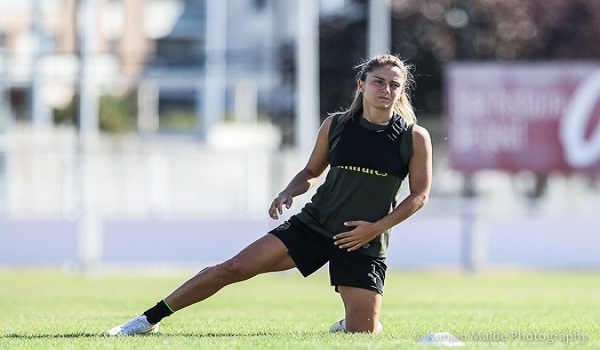 Arsenal went back to the top of the WSL with a comprehensive 5-1 win away at Liverpool Women on Sunday, thanks to a double from Beth Mead and goals from Kim Little, Dominique Bloodworth and Vivianne Miedema. Tim Stillman caught up with midfielder Danielle van de Donk after the game, exclusively for Arseblog News.

To be fair, it was quite difficult on this pitch because it was awful. It was so difficult to control the ball, because it was bouncing all over the place. But we were much better in the second half today I think, we were much calmer and more relaxed and [Danielle furrows her brow briefly] was it 5-1 in the end? [Yes!] so we scored five goals, so we can’t complain about that, we are all very happy.

On Vivianne Miedema’s role as a decoy….

Yes, that was the plan, we had four players behind her, me, Beth, Katie McCabe and Kim and Viv came away a little bit so we could make runs in behind her. It all just worked a lot better in the second half, even though we scored twice before half time. [Laughing] It worked well, so you can see we got our tactics right!

On going top of the league again….

It is one game at a time territory and we approach every game like a final now, we know exactly what we have to do. We know if we win the next 3 we win the league, but we just think about winning the next game. I know that sounds boring, but it’s true.

On playing a tough Birmingham team next weekend….

Birmingham is always a really tough game for us, it is for everybody, they don’t give you anything for free. We know we need to bring our A game, but when we do that we can beat anybody. They have great players, we just need to bring our best performance again.

On getting players back from injury…

It’s great for us as a team and it makes us really happy to see players who have been out for a long time coming back. They look fresh, they look fit, they are smiling, they are training really well and pushing everybody. Dan Carter’s feet are as quick as ever and I am buzzing for her. I said yesterday to Viki ‘give us a bit more air.’ She makes everything quite calm, as a player and as a person and we are really happy they are all back playing again.

? That feeling when, 10 months on from joining @ArsenalWFC, and following a long injury layoff, you finally make your debut…

She is doing amazing lately, I hope she feels more confident but I think that second goal was definitely a cross though, so I don’t want us to give her too much confidence! For once I think the pitch helped us there a little bit.

You know when @bmeado9 is in this position, the ball is only ending up in one place ?

If only the men could do the same – a long way to go before we see that scoreline in the EPL I suspect.

We must’ve had near 80% possession throughout the game, they were so lucky to get a consolation penalty (they’re only shot!). Truly first class and utterly savage, well played! If the chaps can match even half the away form shown by the ladies good things are inevitable!

Hope the lady take it a game at a time,the league is ours,

Congratulations to the Arsenal women on a good win. You make us proud!

Great result. Playing well again is a really good sign. I was thinking, having seen the team lineup tweet and then the tweet that we were playing a 4-1-4-1 formation, that we could play any one of three or four formations with that 11. That’s really valuable versatility. Clever tactic from Joe to use Miedema as a decoy – misdirection to confuse the opposing coach AND it also means we are not depending on feeding VM for our goals, which is good for the other players. Everything crossed now for Birmingham next week. I just checked the table and next… Read more »

Viki was only on for a few minutes and we weren’t doing much defending 🙂 I don’t think she is going to be with us next season, it was a 1 year contract and she’s had lots of injuries before too. There will be plenty of transfer activity in defence, another defensive departure will be confirmed soon…

Oh, I’d forgotten that. Thanks.

Another defensive departure… Will it be confirmed before the end of the season? In other words, I’m dying to know who, and hoping it isn’t one of my favourites!

Yes, it will be soon. You’ll probs work it out if you see the players’ Insta stories 🙂

Apart from doubts about Viki. I was surprised to hear that the very unlucky Jess made her last appearance yesterday and there has been no real news on stalwart Mitch since the FA Cup loss to Chelski. Seems a shame to be talking players leaving when we’ve been hankering their return for most of the season!!! Particularly when we are on the cusp of a first league title in 7 years. I suppose the “rumour mill” is the inevitable consequence of success and the current raised profile of the women’s game in general.

thats a bummer but somehow expected. First austrian since Alex Manninger at the club and she surely was excited to make an impact here. Stupid question, just your opinion….on a scale from 1-10 where 10 is a certain departure… ?!

Great result. Keep it up ladies!!!

Playing away, wearing that gross green kit.. and winning 5-1 ? now for the men to do this

Proud of this team. I just realised we’ve lost two games whereas City Women are yet to lose and we play them at the very end of the season. Which teams did we lose to?

Chelsea at home and City away – but with an exhausted and depleted squad. 40% of the outfield players injured, children (16-yr-olds) starting and also on the bench.

Why are people suggesting Meado’s goal was a cross? To me it appeared like she hit it for the top corner and she is scoring those for fun every week even in a Lionesses shirt!

I’ve just had a thought. Beth came from Sunderland as a prolific goalscorer but we have one of those in the middle of the park already so she got pushed out wide and became the Assist Mistress. So I believe she has simply fathomed out a way of playing out at the touchline and still be a prolific goal scorer!

She says herself that it was intended as a cross this time, though she *did* mean the shot that went in when she was playing for England.

Yes I hadn’t read her interview when I posted but if she wants to score 10 per season from the corner flag I’m not going to put her off!

That cross/goal was completely uncelebrated, I think that is a testament to how far the womens game has come. If I scored a goal like that (whether I meant it or not) i would be going mad…..

….But I am a middle aged man with two bad knees.

Best not to mention bad knees around here!
I wish I could develop a cure for ACL injuries or better still prevent them in the first place!

“Was it 5-1 in the end?” ??
Great stuff from the Arsenal women. If they win the league this year with this threadbare squad that would be something amazing.